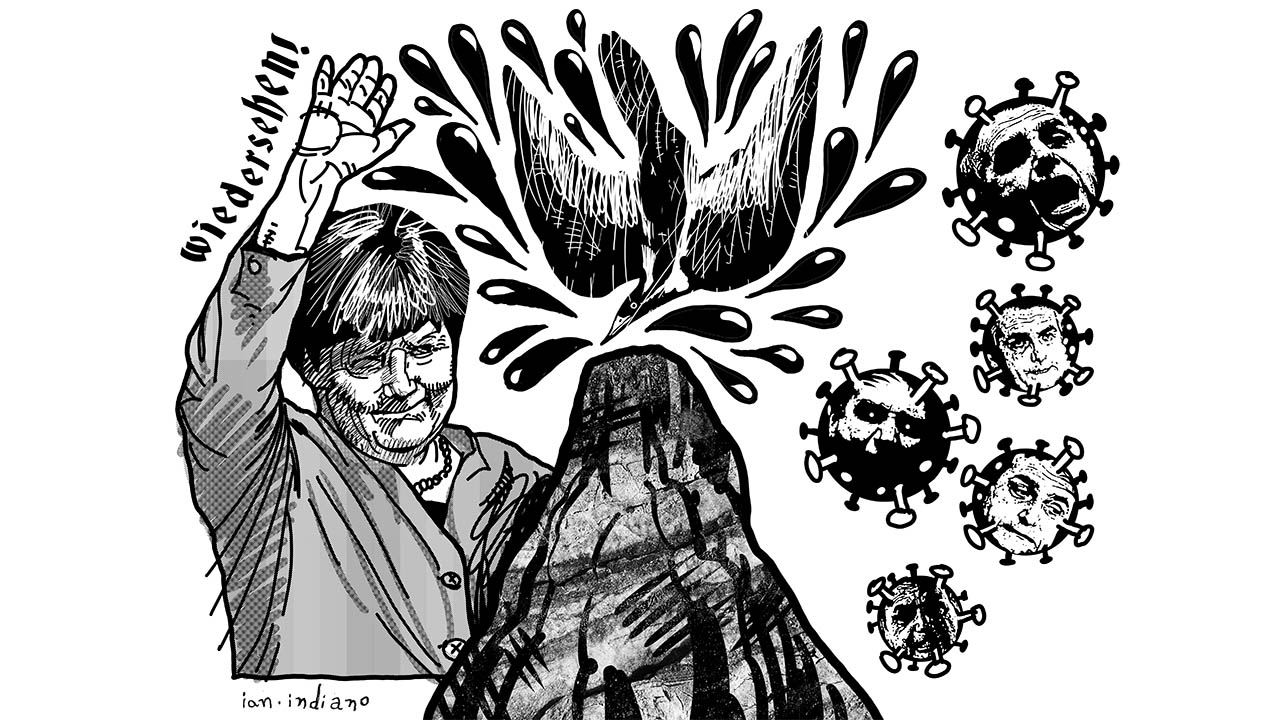 CREDIT: IAN INDIANO
Angela Merkel leaves office, thousands protesting in Brazil and 23 more extinct species. All of this and more, this week on Off the Radar.

This phrase was first written by Thomas Gray in 1968, in his poem Ode on a distant prospect of Eton College. Since then, the phrase has become a common presence in our daily lexicon. It means that, sometimes, not knowing is better than knowing. Of course, that’s a very broad and shallow statement. In the context of this issue’s theme (mental health), it might serve as a warning sign for a column that many times talks about tragedies or injustice. However, this simple three word phrase does not explain what “ignorance” is, nor what “bliss” is, and sometimes, while ignorance can be a bliss to some people, the same ignorance might be the bases of someone else’s tragedy. So far, staying informed is still the best we can do.

Here are five news stories from around the world that you should be paying attention to.

After 16 years as the chancellor of Germany, Angela Merkel is leaving office. Merkel announced her intentions to not run to for re-election in 2018, but agreed to stay in office until the end of her mandate, at the wishes of 67 per cent of Germans. Merkel, who was considered the most powerful woman in the world, became chancellor as the leader of the Christian Democratic Union (CDU), but the latest polls suggest that she will be replaced by a candidate from the Social Democratic Party of Germany. Merkel leaves office with a legacy that definitely helped to shape 21st century geopolitics.

Thousands on the street protest against Brazilian president

Thousands of Brazilians took to the streets in cities and towns across Brazil calling for President Jair Bolsonaro’s removal on Oct. 2. The protests were organized by opposition parties and unions, and the date marks exactly one year before the 2022 elections. Bolsonaro’s management during the pandemic has been widely criticized, especially for supporting untested alternative treatments for COVID-19 and openly speaking against the vaccine. As his country reaches 600,000 COVID-related deaths, Bolsonaro has fallen behind in opinion polls and faces several criminal investigations of corruption and anti-democratic policies.

The Cumbre Vieja volcano, on Spain’s La Palma island has been erupting since Sept. 19. It is estimated that the lava has covered around 267 hectares and destroyed 656 homes. About 6,000 people have been evacuated, leaving behind schools and banana plantations that are now covered by lava. After almost two weeks, the lava finally reached the ocean, raising fears of explosions and toxic gases being released. The president of the Canary Islands, Angel Victor Torres, said that the estimated damage incurred by the eruption exceeds $466 million, and is now pledging financial support.

Ivory-billed woodpecker to be declared extinct

The United States government has declared that 23 species, including the iconic ivory-billed woodpecker, extinct. All of those species were already in the endangered species list but are being removed because they hadn’t been documented for many years. The decision is being questioned by specialists claiming that it is too soon to declare those species officially extinct. These extinctions are a direct result of the human population growth and the loss of natural environments. Although the decision is being questioned, there have been no definitive sights of the woodpecker since 1944.

The World Health Organization (WHO) targeted that 10 per cent of the world’s population to be vaccinated by the end of September. However, more than 50 countries have failed to meet the target. Most are in Africa, where half of the countries have vaccinated less than two per cent of their population. Many of those countries are facing vaccine shortages as the biggest cause for falling behind. According to WHO projections, the African continent needed at least 270 million doses to reach the 10 per cent target, but so far, it has received only 200 million.
Brazil COVID-19 Spain

1
Canada vs. Brazil: How they choose their representatives
2
Getting the most out of remote learning
3
Fanshawe coach reacts to the delayed winter varsity season
4
Coronavirus update: The vaccine is coming
5
The DOs and DO NOTs of our new reality