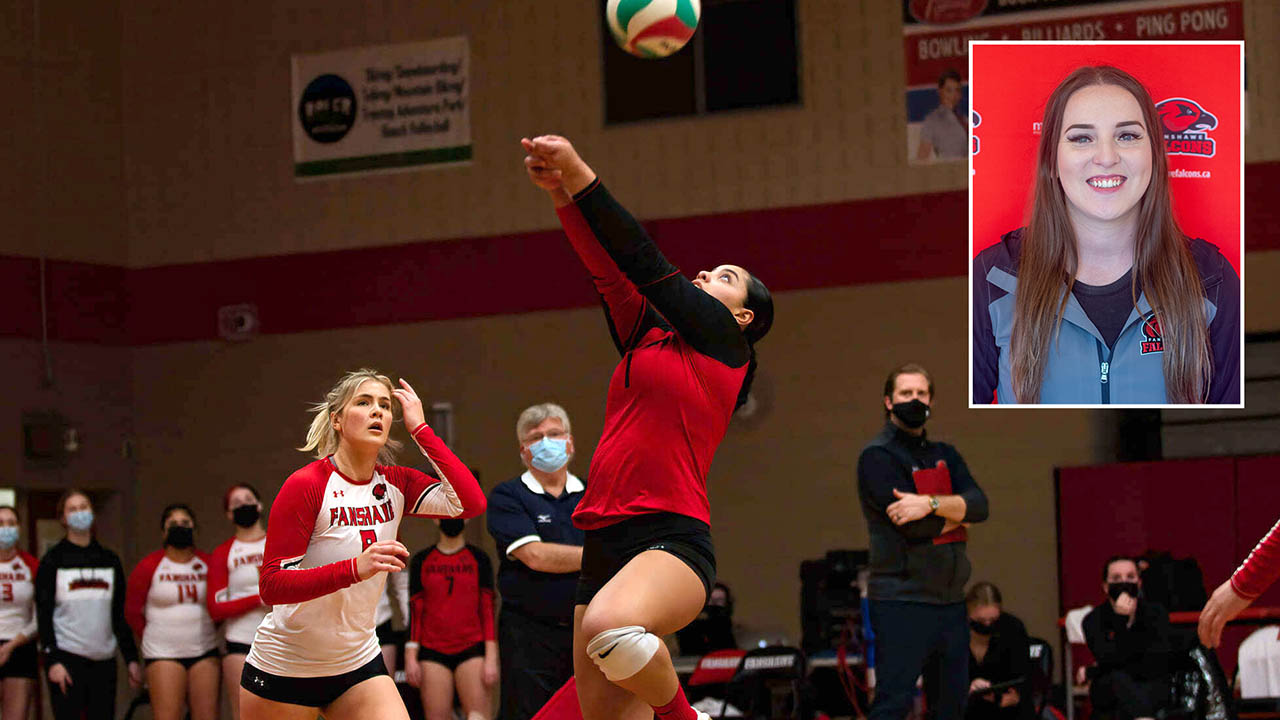 CREDIT: FANSHAWE ATHLETICS
Montana Woodhouse previously mentored under Patrick Johnston to assist with coaching the men's and women's volleyball teams during the 2021/22 season.

The Canadian Collegiate Athletic Association (CCAA) announced its participants for the 18th season of its Female Apprentice Coach Program (FACP) earlier this summer.

“The FACP has created a pathway for females to stay involved in sport and to excel in coaching. Most move into assistant coach positions at the CCAA level, some become coaches within other areas of the Canadian Sports system regionally, provincially or nationally,” said Sandra Murray-MacDonell, Chief Executive Officer (CEO) of the CCAA.

Fanshawe Athletics has been an active participant in the FACP with its pairing of mentor volleyball coach Patrick Johnston and his apprentice Montana Woodhouse. During her first year with the program, Woodhouse worked as assistant coach to Johnston. In her second year with FACP, Woodhouse will be taking over the head coaching position of the Falcons women’s volleyball team.

“It’s been an awesome experience getting to work alongside Montana,” said Johnston. “She’s been willing to take on all tasks over the past couple of years and this season will be a new challenge for her, sitting in seat one as the Head Coach of the [women’s] program. I’m excited to see her take the lead.”

The FACP’s goal is to provide a pathway for young female athletes who demonstrate the skills and interest to coach at a post-secondary competitive level and provide high level quality coaching mentorship to support their professional development.

“Directly and indirectly, I’ve shared the gym with Montana through the London Volleyball Club,” said Johnston. “She’s keen and connects well with the athletes. I’m not surprised by Montana’s growth over the past year, she’s a hard-worker and resilient and that was clear before working together at Fanshawe.”

Johnston said he thought it was great to see the college working proactively with FACP to support women in coaching positions.

“I think we can learn from these experiences but continue to push for more women in coaching and providing the resources to support that,” he said.

According to Murray-MacDonell, the program is one she hopes will flourish and help evolve the face of female athletes and athletics.

“Using the ‘coach the coaches’ approach, we want to build the capacity in the CCAA by having our present qualified coaches be mentors to new female coaches, with the eventuality of having these apprentice and assistant coaches become head coaches and then in turn mentor the new female coach,” she said.

She added that she believes the program has far-reaching benefits for the Canadian sport system.

As for Fanshawe, both the men’s and women’s volleyball seasons kick off Oct. 21, where you can catch Woodhouse in action as she takes the lead coaching.
Apprenticeship CCAA COVID-19 Fanshawe College Fanshawe Falcons

1
Fanshawe men's baseball team takes bronze at provincial championships
2
Local resources available for Indigenous peoples
3
End of restrictions: Student Wellness Centre opens for all students
4
Getting the most out of remote learning
5
Online learning could be the key to educational accessability