Ian Indiano - The ghost of a falcon 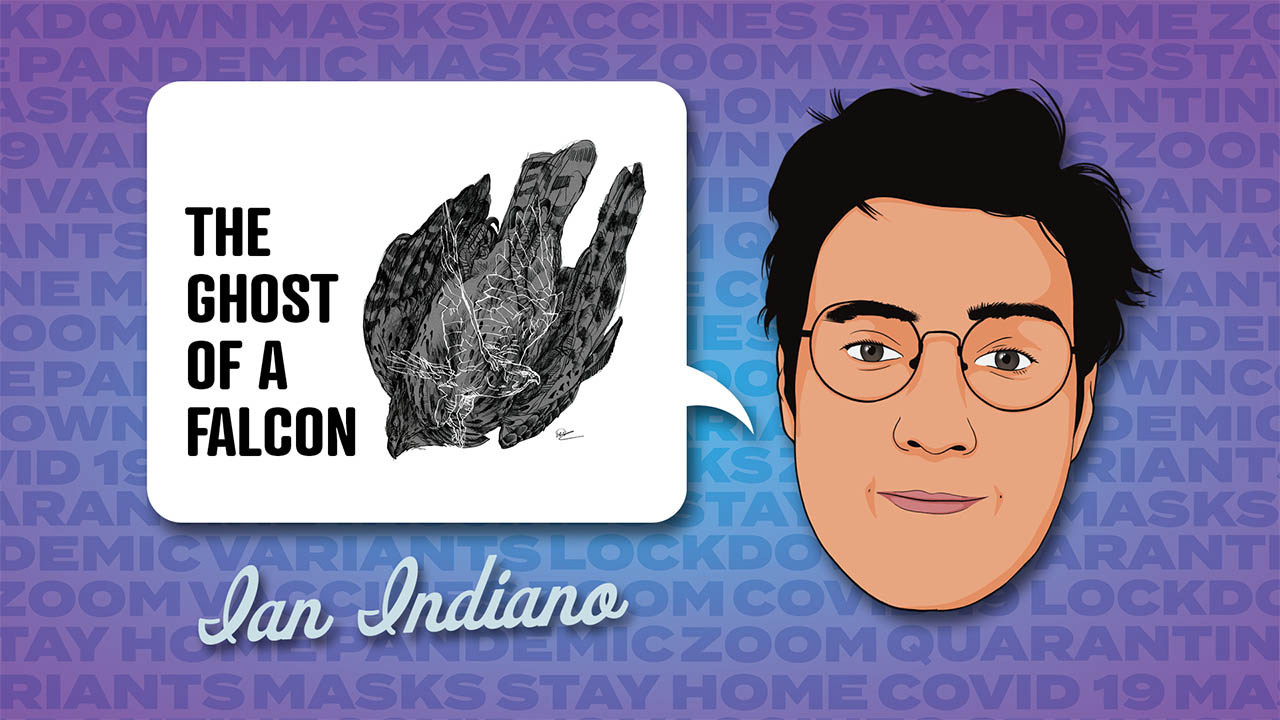 
For the past few years, the world has been giving me systematic classes on not expecting things to go as planned. These lessons started before the pandemic, but after last year, I think I’m ready to graduate.

Looking back to what Fanshawe College meant to me and what it means now would reveal a great change of perspective. In my first day of class, in September 2019, there was a guy dressed in an overall with flames blowing fire while balancing on a one-wheel motorized skateboard right in front of the main entrance of D building. I remember sending a picture of him to my friends in my home country. The halls were packed with people. The walls were pulsating with life. And I, alone in the middle of that sea of people, felt small.

My two eyes behind my glasses were looking everywhere, trying to learn how to read the red direction plaques or to understand the confusing instructional pictures in the recycling bins. I found my class, and for the first time I saw the faces of those who would become dear friends. Faces that within less than a year would be half covered with masks and converted into simply voices emanating under a pair of eyes. I didn’t know what to expect from Fanshawe. I didn’t know what to expect from Canada. Like a newborn child, I was amazed by a world I was seeing for the very first time. And like a newborn child I was unsure about my abilities to communicate. And surrounded by my classmates’ heads in that room, devoid of personal identity so far, once more I felt small.

I lost the count of how many times I was wrong about when things would go back to normal. Maybe three months if the situation in Italy gets better. Maybe six if the vaccine comes soon. Maybe one year. Maybe two. Who knows?

What I do know is how my immediate reality became heavier, more palpable, and at the same time, ephemeral. How cold can a bus window feel when you’re not supposed to touch it? How warm can my own breath feel under a mask? How fast can a Halls package be promoted to an indispensable companion now that I’m constantly smelling my own breath? Not only smelling it, but also seeing it, for it fogs my glasses, and opacifies an already tarnished view. How loud can my footsteps sound as I walk down an empty corridor?

I’ve been fortunate enough to be able to leave my house and go to school a couple of times a week. And I’ve been watching Fanshawe becoming a different being for me. Recently I acquired the habit of aimlessly walking through the school when I can. Fanshawe became a ghost town, and me, one of its few inhabitants.

As I walk the same halls where I once felt small, I realize something. It is amazing how a single human being can expand to occupy every single corner of an empty room if alone there. Suddenly I became a giant, the only breathing thing withing a radius of X meters. The walls are like gallery walls, where you might find a new artwork if you turn a new corner or explore a new floor. Most of these artworks were made by students, from a time where we were all clueless about what awaited us in the 2020s. I have developed relationships with the vending machines, and I know one or two that will give you another treat if you shake it a little bit. I see chairs that moved, empty bags of Skittles, a cardboard box that wasn’t here yesterday. Traces and signs other human beings left behind.

But is the desolation of Fanshawe a real phenomenon? Has Fanshawe become a ruin without being a ruin? And therefore, is the world around us a ruin without being a ruin? I say no, and I write these words to convince myself that I am wrong. Fanshawe is a sleeping pachyderm waiting for the right moment to wake up from its hibernation. A pachyderm sleeping within another sleeping pachyderm, in an endless chain of sleeping creatures trying to figure out if tomorrow is the day to wake up, or if it’s the day after. I am one of these creatures, wandering around a labyrinth of empty rooms, waiting for the snow to melt. Waiting to rise.