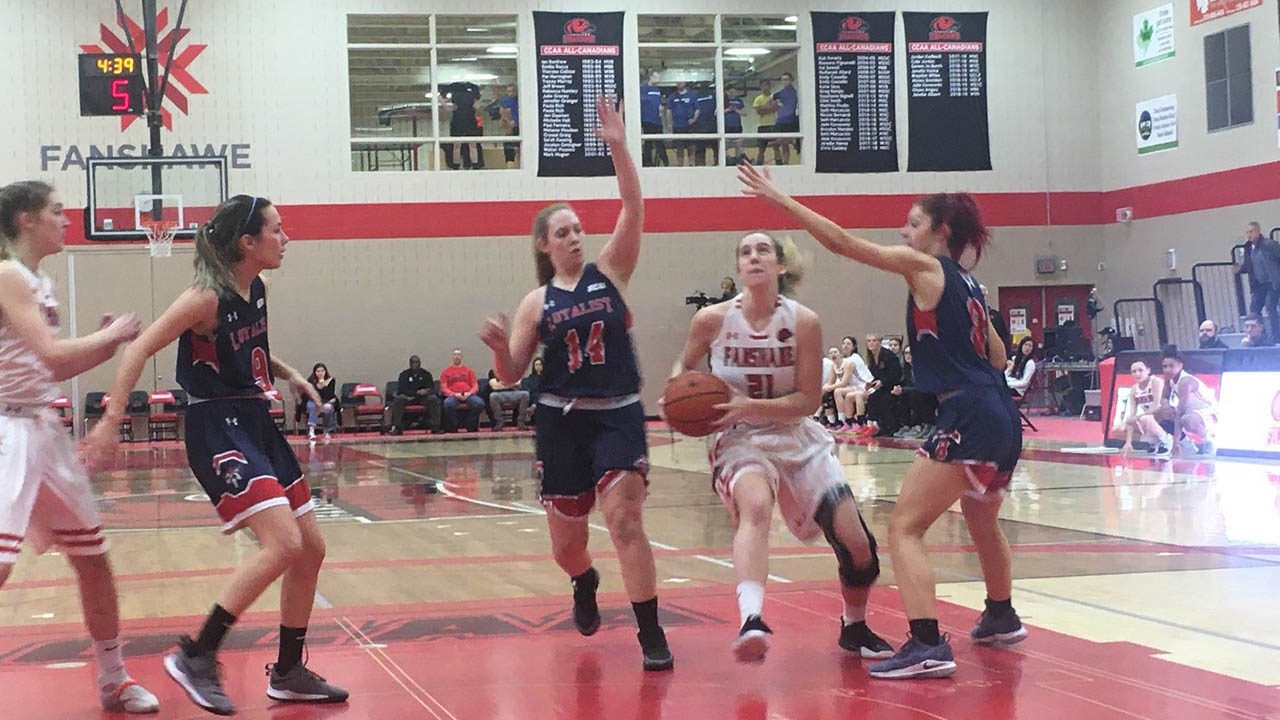 CREDIT: SKYLAR MCCARTHY
Number 21 Ashleigh LaBlance (police foundations) is driving into the paint with two Loyalist defenders against her.

On Feb. 29, the Fanshawe Falcons women’s basketball team were on home court for the final time this season, in a win-or-go-home playoff game against the Loyalist Lancers.

The winner of this game would clinch the team into the Ontario Colleges Athletic Association (OCAA) Provincial Championship tournament on March 6 to March 8 at St. Clair College.

In the first quarter, fifth-year forward Natalie Warren (tourism and travel studies) opened the scoring for the Falcons with a smooth midrange jump shot and scored seven first quarter points. Rookie forward Grace Shea (pre-health sciences) scored four straight points with drives in the paint to make a 21-6 lead at the end of the first quarter.

Fans saw more of this in the second quarter. Senior guard Mikhaila Wright (tourism and travel studies) deflected passes and controlled rebounds on the defensive end, but also got those rebounds on the offensive glass as well. One of these offensive rebounds gave the team some second chance points by rookie forward Jordan Braekevelt (recreation and leisure services). At the end of the half, second-year forward Alison Cotton (office administration) blocked a shot giving a lot of momentum and waking up the crowd, as the halftime score was 43-23.

In the third quarter, fifth-year guard Chuot Angou (protection, security and investigation) went off, scoring 12 points and draining some huge three-pointers that put the crowd on its feet. Second-year forward Mackenzie Van Dyk (early childhood education) had two blocks of her own to bring the home crowd on its feet. Despite Loyalist making a small run of their own, it was a little too late as Fanshawe clinched a spot in the OCAA Championship with a 92-54 win.

Wright had an impressive double- double performance, with 14 points, 14 rebounds, and 5 assists. Angou, Warren and Van Dyk all had double digit points as well with Angou being the highest scorer with 17 points. Warren had 13 points and Van Dyk was a key contributor off the bench with 10 points. This game is also in the history books as this game made a new Fanshawe playoff record for most team assists, making 30 assists as a team.

The Falcons used a lot of defensive pressure, only letting the Lancers score 25.8 per cent of the shots they attempted.

“I think our girls played great defense, consistently putting pressure in which creates turnovers,” Carriere said of the game. “The key to almost every game is defence, so we got to be prepared and almost all of the competitive teams that win championships play great defence.”

“This was a great team effort,” Angou said after the game. “My teammates kept finding me open on offense, but our team played great today.”

The Falcons will now play in the OCAA championship hosted at St. Clair College. They will play their first game against the Durham Lords (14-3, third place in the East division) in the OCAA quarter-final at 3 p.m. on Friday, March 6.
Athletics Basketball Fanshawe Falcons OCAA

A history of LGBTQ representation in video games