Who Is Kateri Tekakwitha? 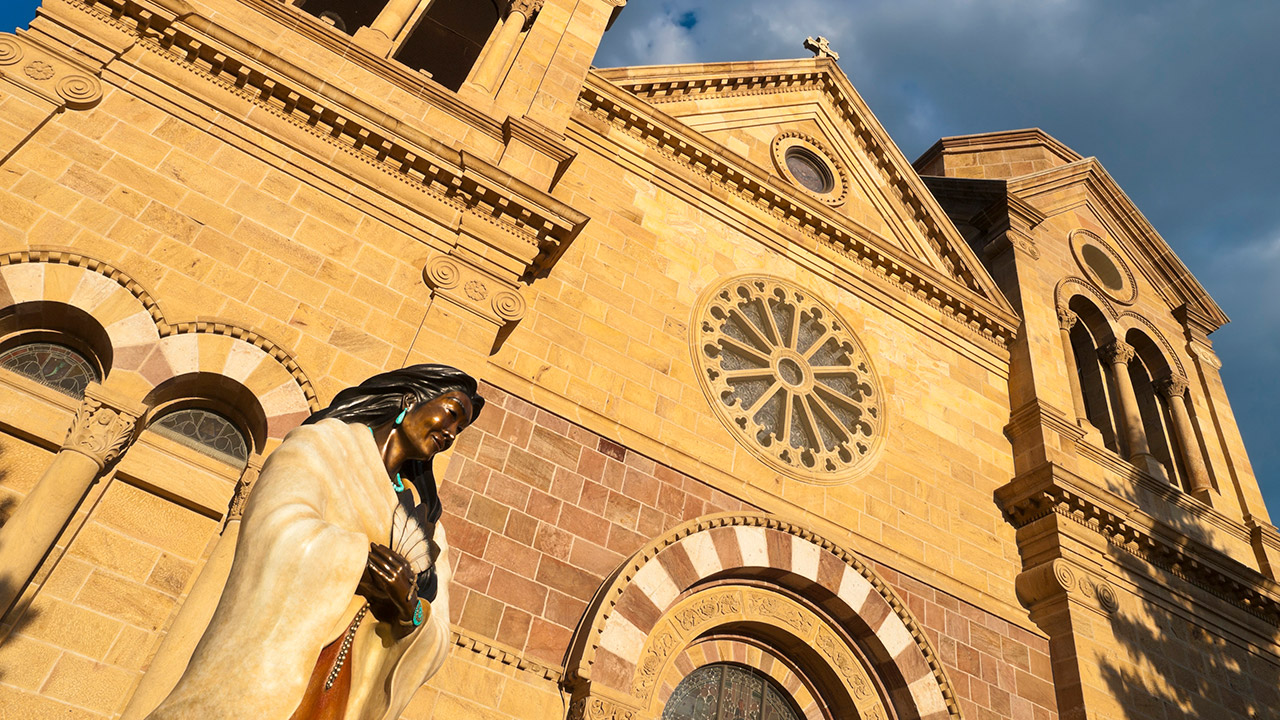 It can be tempting to look back on Indigenous/non-Indigenous history and see it in very simple terms. But reality is not simple; it is better to look for details.

Consider the story of Kateri Tekakwitha. Her journey is that of both a Native person and a convert to a faith that was brought from Europe. It illustrates that past relations between Native people, European settlers, and Christian missionaries are a complicated mix of grace and hope, as well as missteps and pain.

Even though she lived only 24 years (from 1656 to 1680), Algonquin-Mohawk woman, Kateri Tekakwitha, left a very big impression.*

Over 300 books have been written about her. You can find statues of her in Sunbury, OH, in Sainte-Anne-de-Beaupre, Quebec, and in Santa Fe, NM. Other statues and images of her have been set up throughout Canada and the United States. She has been featured in Leonard Cohen’s Beautiful Losers, and in historical novels and film. Pope John Paul II beatified her, and Pope Benedict XVI canonized her. By 1991 there were 130 Kateri Circles, small communities of Roman Catholic and Indigenous members dedicated to reconciliation and to helping Native North Americans adopt and understand the Catholic faith.

Who was Kateri Tekakwitha?

Kateri was born centuries before Canada and the United States existed, in what is now New York State. She was the daughter of a Mohawk chief and an Algonquin woman. Her mother had been baptized and educated by Catholic missionaries in Trois-Rivieres (near Montreal). The village Kateri grew up in provided space for many who survived smallpox and other epidemics, as well as captured natives from tribal battles.

During Kateri’s early years, Catholic missionaries made a strong impression on her. As they worked, they discovered many bridges between Christian and Native traditions. At other times they worked to end certain spiritual practices such as the Feast of the Dead. Once, Mohican warriors attacked Kateri’s Mohawk village, provoking a successful defense and the torture of captured Mohicans. One of the missionaries, Jean Pierron, pleaded for the torture to stop, but he was not successful.

And then in 1671, the Mohawk chief Ganeagowa, after returning from a long hunt, announced that he had become a Christian. During his trip he had made friends with Jesuit missionaries who had set up a Catholic mission among Iroquois people at La Prairie (near Montreal). The Christian life of the Iroquois impressed Ganeagowa. At the same time, a priest, Jacques Fremin, instructed him in Catholic life and faith.

When Kateri was 18, her aunts tried to set her up in a marriage. She endured so much ridicule for resisting this that she fled the cabin in which her family lived. One day, home because she was injured and therefore not harvesting corn with the other women, she met a missionary named Jacques de Lamberville. He was visiting the village. Lamberville and a number of others listened as she told her story and expressed her desire to become a Christian. After instructing Kateri for some months, Lamberville baptized her. Kateri was 19.

Because some of the Mohawks persecuted her, Kateri joined other Native new believers in Kahnawake (south of Montreal) in 1677. Soon afterwards she was influenced by the Jesuit, Pierre Cholenec, who introduced the tradition of the direct “mortification of the flesh.” This involved hair shirts (very uncomfortable), iron girdles and whips to restrict the pleasures of the body (This may have been well-intentioned, but still I regard it as a serious distortion of the Christian life; it should not be imposed on believers).

In the following years leading up to her death, Kateri became known for her Catholic devotion. She sometimes overdid her “mortification” of the flesh, until another Jesuit, Claude Chauchetiere, instructed that she should no longer do so.

Kateri became a close friend with another very devout believer, Marie Therese Tegaianguenta. Even though the Jesuit leaders did not think they were mature enough to start a support group for new native believers, the women continued in their spiritual journey together.

One day she became ill. Very soon friends realized that she was unlikely to survive. Cholenec and Chauchetiere provided the last rites. Kateri died in the arms of her dear friend, Marie Therese. It is written that her last words were, “Jesus, Mary, I love you.”

After her death, there were reports of her being seen and heard. And during the many years that have come after, there have been healings attributed to her. One of them concerns a Protestant child, Joseph Kellogg. Seemingly about to die, a Jesuit gave him a piece of wood, a relic, from Kateri’s coffin. The child recovered. Likely, many people early on believed in Kateri’s healing power, either in this way, or by prayer.

Kateri’s legacy continues on. Her desire to found a support group for new native believers has become fulfilled in the creation of Kateri Circles. And her Christian faith continues to provide guidance for Indigenous and non-Indigenous people alike.

*I am relying on the Wikipedia article, Kateri Tekakwitha, for the historical content of this article.
Editorial opinions or comments expressed in this online edition of Interrobang newspaper reflect the views of the writer and are not those of the Interrobang or the Fanshawe Student Union. The Interrobang is published weekly by the Fanshawe Student Union at 1001 Fanshawe College Blvd., P.O. Box 7005, London, Ontario, N5Y 5R6 and distributed through the Fanshawe College community. Letters to the editor are welcome. All letters are subject to editing and should be emailed. All letters must be accompanied by contact information. Letters can also be submitted online by clicking here.
Indigenous Religion

1
How the Canadian healthcare system is prioritizing for the vaccine rollout
2
Ukraine, a friend, and the riddle of injustice
3
Our peace deficit
4
The loss of language and culture in Indigenous communities
5
No space for Indigenous voices in politics amid Truth and Reconciliation

Off the radar: What’s going on in the world