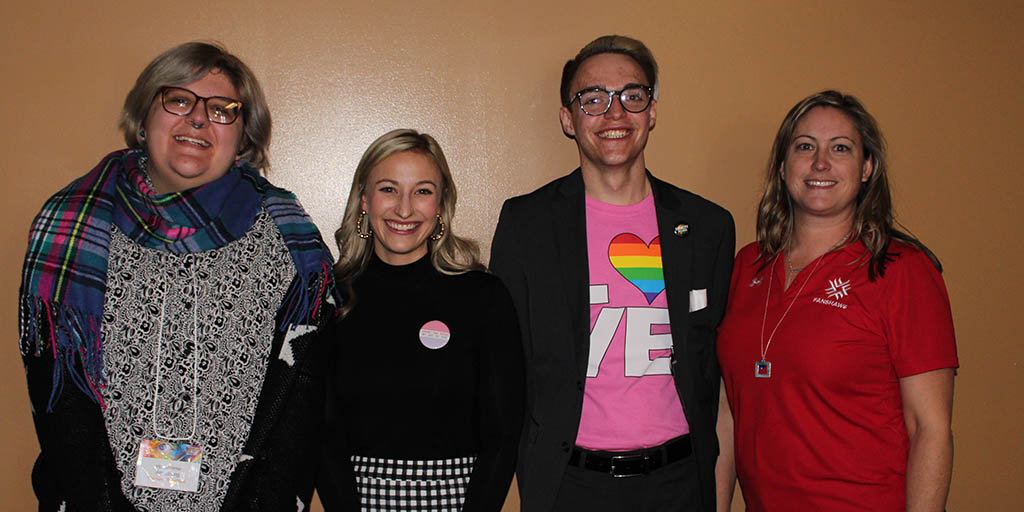 How attached are you to your name?

It’s a question that human services foundation student, Hawthorne Armstrong, said they were asked when requesting updated name documentation while living in residence. The non-binary trans student had at last acquired the legal proof of their chosen name change yet faced difficulties when transferring the new information to the residence’s system.

They said at the time they were asked how attached they were to their chosen name, and if they would consider going forward without the change on their file as there was only a month left in the term.

It was just one of the many frustrations expressed by some of Fanshawe’s most marginalized students during the College’s first LGBTQ2S+ and ally professional development conference, Reclaiming Our Time.

On March 29, faculty, staff and students attended the student-led conference to share and discuss obstacles faced by the LGBTQ2S+ community in and around campus.

“A lot of things I face are things people don’t realize are challenges,” Hawthorne told Interrobang during the conference’s lunch break, emphasizing the importance of inclusive spaces and supports.

“It gives us an opportunity to educate and reclaim our own time,” sexual violence and student life programming assistant, Fraser Brown, said of LGBTQ2S+ students in attendance. “Not just for us and to make a better future, but also for those who we’ve lost in our community too, since suicide is rampant in the LGBTQ2S+ community.”

Brown, who is also a former president of Fanshawe’s LGBTQ2S+ advocacy group, Spectrum, said the conference was prompted by a need for Fanshawe to listen more closely to the experiences of its queer students. He and other members of Spectrum had pitched the idea for the conference during a meeting with Fanshawe’s Positive Space Committee several months prior, from which it received the green light.

After months of helping Brown organize the event, Armstrong said they were happy to see the turnout reach full capacity.

“Seeing how many people showed up was really impactful,” Armstrong said. “It makes me look forward to next year.”

The day also included keynote presentations. David Garzon, community engagement manager of gender- based violence prevention organization, White Ribbon, spoke to the audience about the meaning of being a queer ally. Later, journalist Shawn Ahmed opened up about his charity work and life as a queer Muslim.

Ahmed took note of the temporary all-inclusive signage posted on the nearby bathroom doors in honour of the event.

“They’re not trying to push for huge funding changes and infrastructure changes,” Ahmed told Interrobang of the conference’s student organizers. “They’re just [asking for] stickers and signs, and I’m hoping that kind of change can happen.”

Sexual Violence Prevention Advisor, Leah Marshall, said that the key takeaway from the event was that students had a platform to speak to the College community.

“Students shared their lived experiences and also the changes that they want to see on campus, and I believe those are the voices that we need to be listening to because that’s the reason that we’re here,” Marshall said. “We’re here because of students and we need to be able to support students when they bring these issues to the forefront.”
Conference Fanshawe College LGBTQ2S+ On Campus Events Reclaiming Our Time Conference

Fanshawe photography student in the running for national award