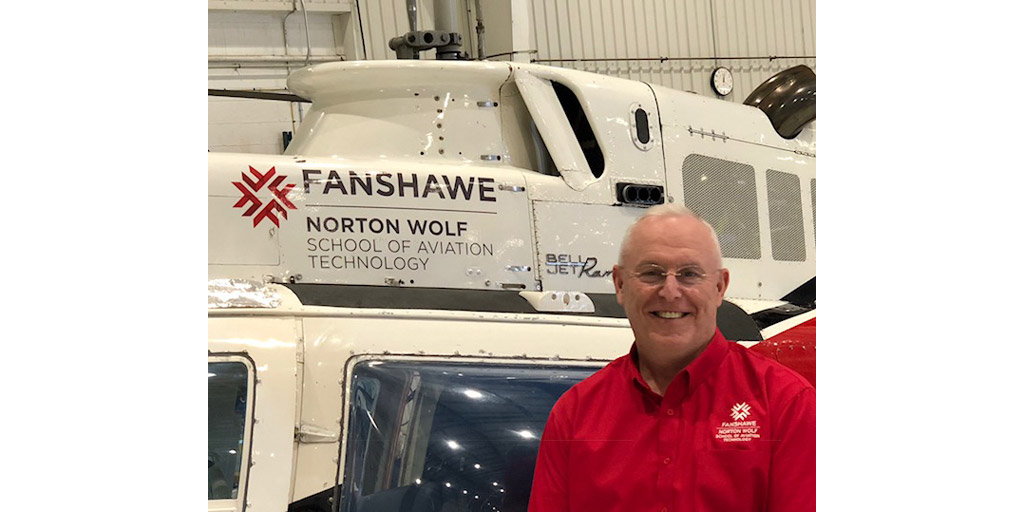 Larry Weir has been appointed as the new chair of the Norton Wolf School of Aviation Technology.


After 37 years of service, recently retired decorated veteran of the Royal Canadian Air Force (RCAF), Larry Weir, joins the Fanshawe family as the new chair for the Norton Wolf School of Aviation Technology.

According to a Fanshawe Corporate Communications press release, Weir is a graduate of RMC (Royal Military Academy of Canada) with a bachelor of military arts and also graduated from the Canadian Forces Command & Staff College with a graduate in strategic strategies.

When asked on how he entered aviation Weir said he had not originally been in aviation when he first joined the Air Force.

“I went to the recruiters and wrote all the exams that the Canadian Armed Forces used to sort of weed out people as they came into the process. I was offered several different opportunities within the air force and eventually ended up as a maritime Air Navigator,” Weir said.

For his 37 years of service, Weir was a part of aviation activities within the RCAF, with his work spanning a large spectrum of roles that were both domestic and abroad.

As a pilot, he flew planes such as the CP-140 Aurora, a maritime Air Navigator and the Alpha Jet, which is an electronic warfare aircraft. At the same time he held various staff positions including being an Air Crew Leader, a Commander of the 414 Squadron and working within the North American Aerospace Defense Command (NORAD) for air defense.

After retiring, he and his wife decided to move to London from the United States. Weir stated it was not long after moving to London that he was asked to attend Airshow London, which he said, is how he got acquainted with Fanshawe.

“There very first event was actually in the hangar here [his location] at the Norton School of Aviation Technology. I was significantly impressed,” Weir said. I thought, ‘this is terrific,' and actually commented on it at the time that if I wasn't retired this was where I would want to work.”

According to Weir, he was made aware of the soon to be vacant position because Stephen Patterson, the chair at the time, was running for the role of dean for the faculty of Arts, Media and Design.

Patterson had positive words for Weir, about this new position.

According to Weir Patterson said “you [Weir] should throw your [Weir's] hat in for this [the role of chair] because it would be pretty interesting”.

Weir then went through the application procedures and was to “great good fortune”, hired for the job.

As chair, Weir's job comprises of working in the management of the programs taught at the school, looking after the staff and working with the main campus in ensuring that the school is consistent with the larger strategic vision of Fanshawe.

As well, Weir said he wants to strive in bringing new growth to the Norton Wolf School of Aviation Technology as its chair.

“The Norton Wolf is almost brand new, I think it's not even five years old yet. We've only scratched the surface of the enormous potential for aviation based education in lots of different areas. I say that one of the most exciting parts of my job here as it evolves will be to find ways to broaden the opportunities for education here at the Norton Wolf,” Weir said.

When asked how his years with aviation may helpfully impact the growth of the school, Weir had meaningful words to share.

“I've had the great pleasure of seeing a number of large organizations and how they work and how they are constantly improving and the whole cost and process of improvement with them and have watched how the leadership empowers their people and grows their organizations,” Weir said. “I think that is one of the big things that I bring to this school. I have had tremendous exposure to a number of different cultures and corporate cultures as well in how to empower people and provide opportunities to them.”