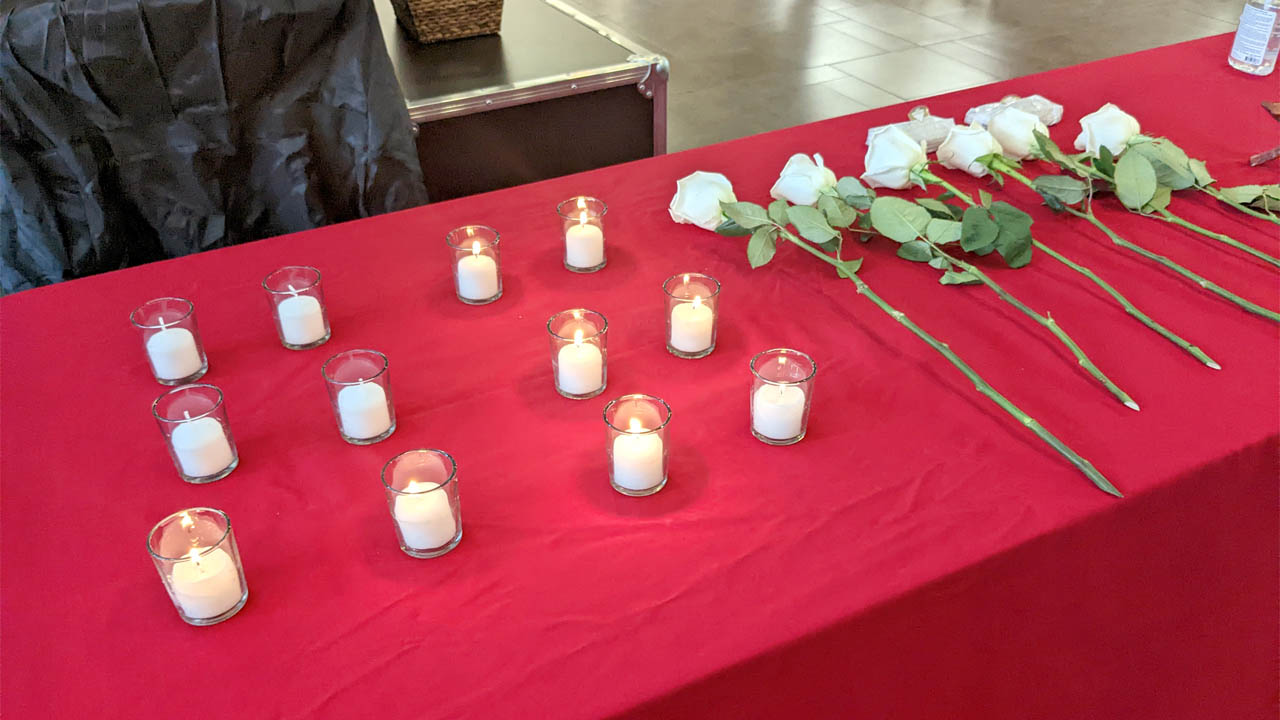 CREDIT: BEN HARRIETHA
During the ceremony, candles were lit for those killed in the shooting and roses were laid for the women of Iran.

Fanshawe recognized violence against women internationally in a small ceremony on Dec. 6 that honoured the National Day of Remembrance and Action on Violence against Women or White Ribbon Day.

Dec. 6, 2022 marked the 33rd anniversary of the Polytechnique Montréal shooting that killed 14 women and injured 15 others. The shooting is seen as an anti-feminist and misogynistic attack, as the shooter not only targeted women, but expressed intent to harm nineteen other Quebec women because he considered them feminists.

Michele Beaudoin, the vice president of student services, recounted the moment she heard the news of the shooting.

“I was 29 when the women of Polytechnique lost their lives. I remember vividly, crying, screaming inside, and being angry,” she recalled. “Everything I learned in university, everything I thought Canada was, crumbled in that moment for me.”

Beaudoin explained that despite the impact of an event like the shooting, she believes that the path towards equity and opportunity is clearer than ever.

“I wasn’t disillusioned in 1989, nor should anyone be today because there are many of us who learn from this sad moment in our history who have become strengthened in their resolve.”

The ceremony was not only to recognize the 14 women who were killed 33 years ago, but to bring light to violence against women and take action to try and make Fanshawe a safe space.

Chris Hannah, an academic advisor at the Institute of Indigenous Learning, explained how Indigenous women and Two-spirit people are at a higher risk of violence than anyone else in the country.

“A report was released by the RCMP in 2014 stating that between 1980 and 2012, there had been over 1,200 reported cases of Indigenous women who are either missing or murdered, while community gathering of these names placed the number higher.”

Hannah added that according to a report released the same year by Statistics Canada, Indigenous women are six times as likely to be the victim of a homicide than non-Indigenous women. She went on to explain how the violence against Indigenous women is another step in the dehumanizing process that has been going on for generations.

“It’s hard to really visualize what 1,200 lives lost looks like or what it feels like if you’re not part of our community and don’t experience the impacts of this daily.”

Hannah asked people to be brave enough to reflect upon themselves, speak up when others are being unkind, and to admit mistakes and try again.

As mentioned, the event covered the violence women experience not just on a national level, but an international level as well. Iranian members of Fanshawe’s community spoke on the ongoing women’s rights crisis in Iran, and how it has affected them. Sahar Samimihaghgozar, a professor with the faculty of creative industries, recalled living in Iran when she was younger.

“All my life, I carried these fears with myself. Not being able to make change, not being heard. Now I know why the Islamic republic regime always wanted us to be fearful,” she said through tears. “They labelled us as others by creating special groups such as morality police, so they could enforce violence and fear to deny the humanity of women.”

Moe Sharifi, a professor at the School of Language and Liberal Studies, spoke about living as a man in the patriarchal society of Iran with the fear of losing a loved one, but still having the hope that many Iranians have.

“I’ve seen hope in the eyes of the grandmother, who would bring towels and water to the streets to help those who were blinded by tear gas and pepper spray. I’ve seen blood and hope alongside anger and fear in the face of those who fought bullets with their hands.”

Leah Marshall, Fanshawe’s Sexual Violence Prevention Advisor, closed out the ceremony by asking people to pay attention to what is being said by survivors.

“My ask today is that everyone sees that they have a role to play, all you need to do is turn on the news. We can speed up the change so that in another 33 years, I’m not telling my mentee that some things won’t change.”
Gender-based Violence Leah Marshall National Day of Remembrance and Action on Violence against Women White Ribbon Day

1
Taking care of your sexual health
2
You are not alone: Support for survivors on campus
3
Fanshawe's Sexual Awareness Week offers students a sense of safety

How to stay active during the winter season