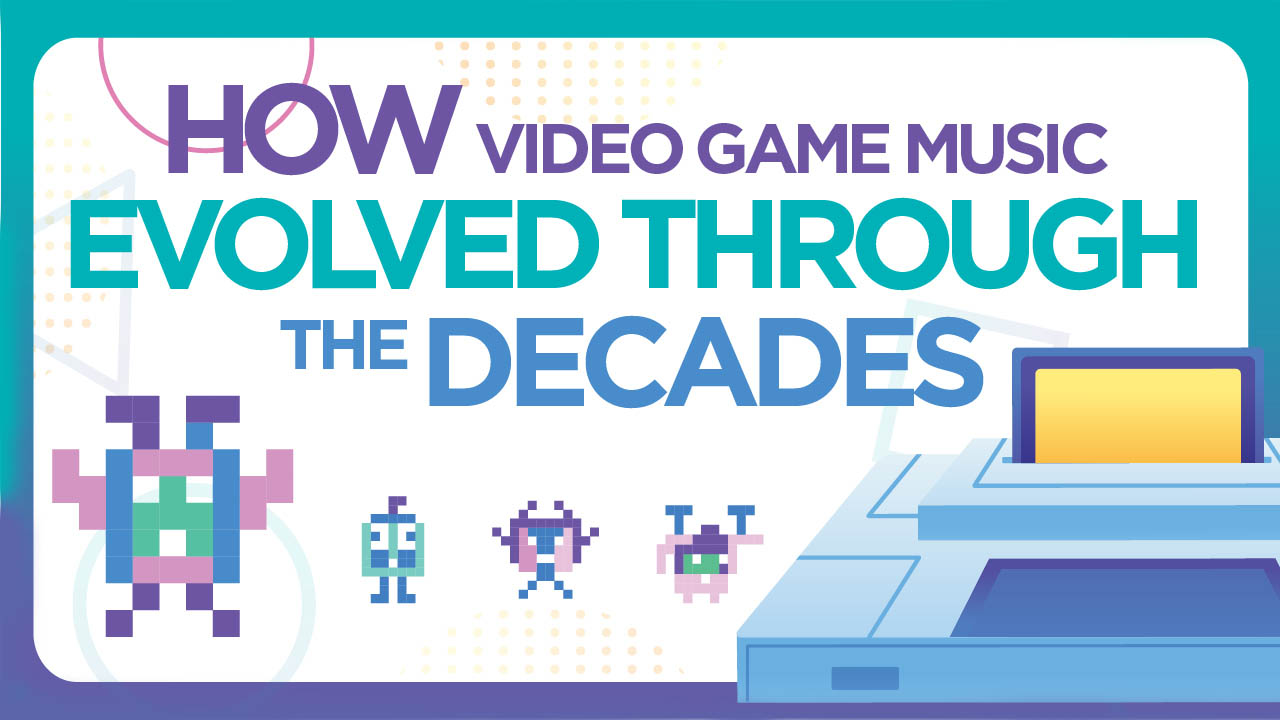 Video games are now a staple of modern culture. From the early days of Pong (1972) and Super Mario Bros. (1985) to the subsequent success of the wider games industry over the past four decades, games have remained relevant and continue to influence mainstream culture everyday. Part of that influence comes from the long history of a unique culture of sound and music prevalent in games.

The first commercially successful video game in history was Pong, a simple game made by engineer and computer scientist Allan Alcorn of Atari, Inc. meant to simulate table tennis. It had a single tone used for all its sounds.

Throughout the 70s, video games were primarily played in arcades and the music would often consist of a short introduction and a “game over” theme. Space Invaders (1978) was the first game to change that. The music in Space Invaders was a simple four note descent looped over and over, but which sped up over time alongside the movement of the alien enemies. This was a revolutionary approach to sound in games at the time.

The 80s saw the release of iconic titles such as Pac-Man, Tetris, and Nintendo classics such as Super Mario Bros., and The Legend of Zelda. Now commonly known as the 8-bit era, new technology during this era allowed games to have around four or five sound channels and more memory space, which led to longer compositions and more music for each project. Arcade games were still in fashion with the rise of fighting games like Street Fighter. Consoles such as the Nintendo Entertainment System (NES) and Sega Master System were released during this era and were the earliest home consoles with wide appeal. Sound hardware was still very limited at the time which challenged early game musicians to get creative with the limited amount of sounds and memory space they were provided. Working with game music was still so technical at that time that many early composers also had to learn programming to write their music.

“The NES days were tough,” said Final Fantasy composer, Nobuo Uematsu for Red Bull Music Academy. “I had to type in every little thing by myself, like for an eighth note in C, C8, for a 16th note in E, E16 and so on. I used a goto statement to repeat and such, and had to do that endlessly, so it was really tough.”

Despite this, many of the most memorable musical themes in video games came during this era due to the creative challenges leading to iconic music composed by now-legendary composers Nobuo Uematsu and Yoko Shimomura who have both worked on landmark titles such as the Super Smash Bros. series together.

The late 80s to the mid-90s saw the beginning of the 16-bit era as the fourth generation of game consoles came to the market. The Super Nintendo Entertainment System (SNES) and the Sega Genesis were the top competitors in the race for market share. Sega had just released Sonic the Hedgehog in 1991 and was fierce competitors with Nintendo at this time. Other popular titles of the era included The Legend of Zelda: A Link to the Past (1991), Chrono Trigger (1995), Final Fantasy VI (1994), Sid Meier’s Civilization (1991), Mortal Kombat (1992), and Donkey Kong Country (1994). This was a golden age of creativity in video games and the sound capabilities grew to allow for stereo sound, more voices, and an introduction to sampling.

Sound teams now had access to a higher level of complexity for their music and used FM Synthesis and samples to write their music. A composer could record some basic sounds into a computer and manipulate them to sound closer to real instruments unlike the limited square waves used in the previous generation. This however wasn’t true of the handheld consoles that came out of this time like the Gameboy or Sega Game Gear which behaved much like consoles of the previous generation but continued the tradition of composers learning to write music with hardware limitations. The first Pokemon games, Pokemon Green and Red, scored by developer Junichi Masuda, were released on the original Gameboy and the music only used two square channels, a programmable wavetable, and a noise channel.

The late 90s and early 2000s was another transitional period as the fifth generation of consoles were released alongside improvements to the handheld consoles. Games were transitioning to 3D and many consoles were now transitioning to a new memory format, the CD-ROM. Many composers were now becoming recognized universally for their contributions to games and many of the first video game music concerts were performed at classical theatres such as the performance of Music from the Final Fantasy film in 2002. Games started to feel like an established cultural phenomenon and composers from the film had already started working on games.

Martin O’ Donnell, a composer who had previously worked on radio jingles such as the Flintstones Vitamins jingle, had switched focus to video game music when his company Total Audio had done the sound design for a game called Riven. Now he is best known as the composer for the Halo series and wrote the Halo main theme, one of the most enduring pieces of game music in mainstream culture.

Game music has gone through many iterations. Many musicians from older eras have become forgotten over the years as new and exciting talent took up the mantle of providing consumers with the beautiful sounds we hear in our favorite video games. Big AAA games have become the norm with sound teams recording live orchestras and bands for inclusion in game soundtracks. Today, video game music is even recognized as an award at the Grammys and mainstream musicians now sample classic sounds from a generation ago.
Mario Music Nintendo Video games

Revitalizing music hits of the past through TikTok