Geeky places to shop online for your international nerd stuff 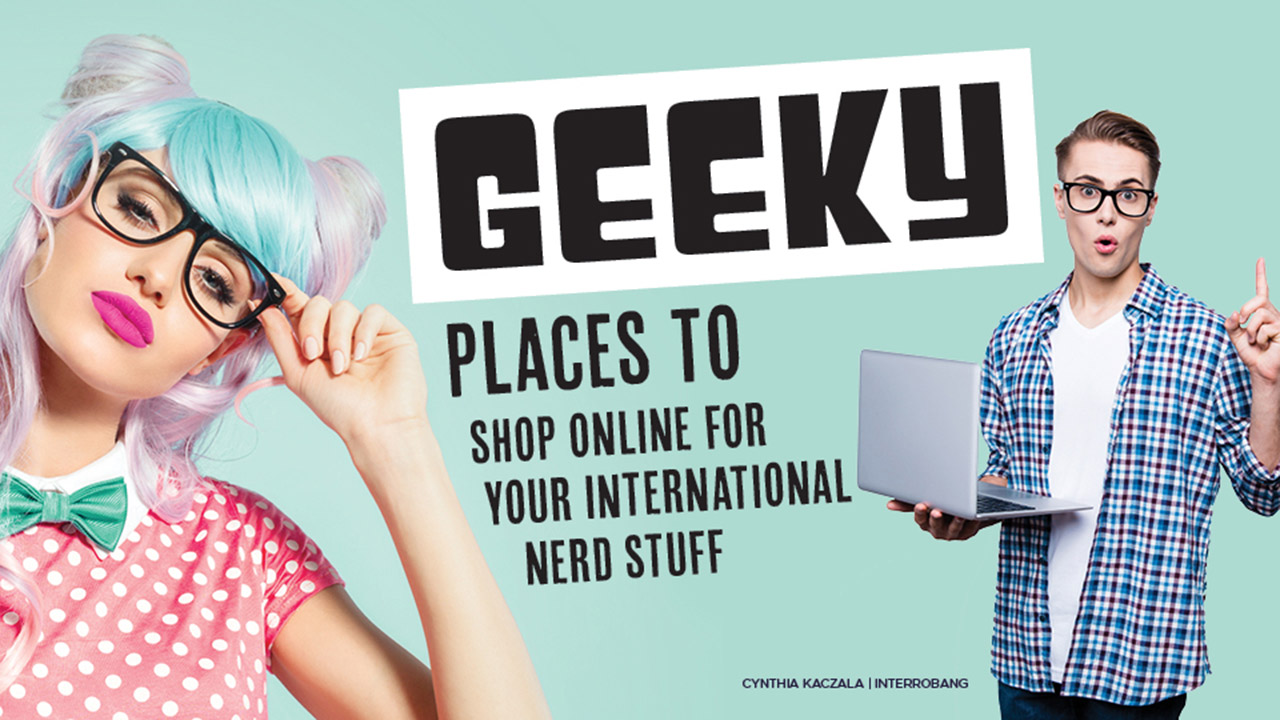 Sometimes it’s hard to get good merchandise from our favourite series/video games that we so desperately want to get our hands on in person.

Why not try looking for stuff online? Buying stuff from oversees is kind of hard to do if the website is not in your native language. The following list of stores are in English and ship internationally too, so you don’t have to worry about the package not being able to reach you.

This store carries official merchandise from Japan with a range of items, such as keychains, calendars, figures, blankets, clothing, etc. You’ll usually be able to find something that you want from your favourite game or anime since they have a large catalogue of series. And they never really run out of items, since it’s constantly updating with new merchandise.

You can even pre-order items months in advance and they have a back-order system to resell popular items.

Its products are mostly electronics- related, like CDs and video games. They even sell game store credit, such as PlayStation Store cards. Make sure to check out the item’s information on the page too, since some items are in other languages only.

A chain store in Japan that sells used merchandise, basically a digital thrift store. It’s the perfect place for getting something cheaper than what you can get it new. One of their main hits is that you can get for a low price lots of doujinshis, which are fan-mangas made by fans of an anime/manga or game that usually features the original cast of characters and plot from the source material.

They sell boxes filled with randomized merchandise from pop culture series like anime or video games that are based on a theme each month. Items inside can range from things like pins to mugs to figures. Sometimes they sell crates that focus on one franchise with all the items inside revolving around that series. Most crates have a loot pin included that can be used to unlock bonus stuff. You also can sometimes get a Loot Crate version of an item. These are products that are different from the original in some way.

Mostly a collection of items that were stock leftovers from previous Loot Crate boxes. Sometimes you can even buy whole crates that were sold in the past.

A Japanese snack version of a loot box. They come with Japanese snacks, tea stuff and a culture guide, which tells you more about the snacks. They have a vegetarian box available and sometimes they have themed ones selling too.

The store is like Etsy, offering both fan-made items and used official products. There is a range of items to buy, such as prints, keychains, figurines, cosplay, etc.

Similar to amiami, however, their products are mostly figure related things, such as Nendoroids and Gunpla (Gundam models).

Has a wide selection of items to choose from. The store has literature available in Japanese versions and exclusives from Japan, such as magazines. It also has a lot of apparel items, such as J-Fashion stuff. Proxy websites are places you visit when you can’t purchase an item you want because they only ship domestically. For some extra fee they will buy product for you and send it to you. Most sites have some preset stores that you can browse through without leaving the proxy. If the store you want to buy from isn’t there, then you can usually input a link to the item’s page and order that way. Here’s a list of some proxy websites:

1
How the Nintendo Switch switched the gaming world
2
Leisure Suit Larry: A raunchy relic of the non-PC gaming age
3
Fanshawe makes history in OPSE Hearthstone match
4
Seven games you didn’t know were made in Canada
5
Indie developers are leading the way for better representation in gaming