Growing food in space could be the answer to food sustainability 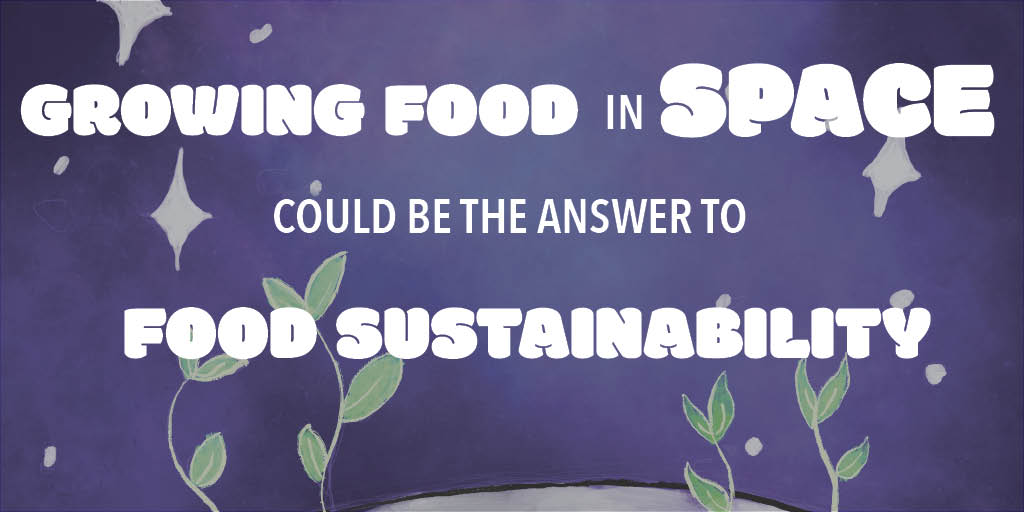 Long before mass extinction and global flooding, scientists predict that one of the key fallouts from overconsumption will be widespread food shortages.

Following current population trends, it’s expected that the world’s population will grow to 9 billion people in the next 40 years. That much growth, that quickly, is going to put a tight strain on the already struggling agriculture sector.

Environment Reports, a publication from the Institute on the Environment, suggests that crop production will need to increase by between 60 per cent to 100 per cent in order to feed the nearly 2 billion people on Earth who are already suffering from hunger, combined with the additional 2 billion who will live on the planet in 2050.

Most of the Earth’s usable land has already been taken up by agriculture, with the remaining 9 per cent of usable land being used to produce industrial products like biofuels (Environment Reports). Protein sources, like fish, are at risk from extinction due to overfishing the Earth’s oceans. Meanwhile, the United Nations (UN) has warned that extreme weather caused by climate change like droughts, floods and storms are causing irreversible damage to usable agricultural land.

Moreover, experts from the UN said that these impending food shortages are more likely to affect people living in poorer parts of the world, which could lead to issues related to mass immigration. It’s not a lost cause, though. Even that 2019 report from the UN came with some measure of hope for change, but it’s going to take some solid re-evaluation of our current food system in order to get there. In fact, the solution might not be found on the Earth at all. Colonel Jeremy Hansen is an astronaut with the Canadian Space Agency (CSA). He finished his basic training almost 10 years ago and is now awaiting his mission to space. It’s more than likely that Hansen will be the next Canadian to visit the stars.

While awaiting his mission, Hansen has been working with scientists at both NASA and the CSA to address global and interplanetary concerns. One of the biggest issues he is seeking answers to is food insecurity and how it might be helped by the science used by astronauts. He said growing food in space is already going to be the reality when it comes to feeding astronauts there. “We’re already growing food on the space station more as a test,” he said. “Eventually we’re going to have to grow food in space, either on the Moon or on Mars, in order to sustain people who are there.”

NASA has had success growing food on the International Space Station (ISS) through its Veggie Experiment. Scientists are trying to determine how to grow produce in environments with little or no gravity. According to NASA, scientists are interested in using inter-planetary soil to grow food on the Moon or Mars, though the soil on those planets isn’t actually “soil” as we understand it. It’s mostly made up of volcanic ash, and toxins that could be dangerous to humans if consumed in high amounts.

While there may be a long way to go in effectively growing food in space, one experiment, a little closer to home, is proving to be incredibly promising.

The CSA partnered with a community greenhouse project in Gjo Haven, Nunavut back in August. The Naurvik greenhouse is a hydroponic sea can station where community technicians have been growing vegetables since last fall. The goal was to figure out how to grow vegetables in Canada’s desolate northern territories, but it caught the attention of CSA scientists. The same technologies used by the greenhouse in Nunavut are used by NASA’s astronauts growing food on the ISS. The success of the food growth in Naurvik could help teach scientists how to better grow food on the Moon and Mars. “It’s just fascinating, I think it’s a really great success story,” said Hansen. “And it’s something that we can grow.”

The imagined solution to food shortages and food insecurity is that when the Earth’s land has been used up completely, food could be grown in remote locations, including space, in order to feed the Earth’s population. A lack of usable land wouldn’t be an issue if there were alternative options for growing food. That is why the CSA is exploring these options, to apply their extraterrestrial technology to these most pressing threats to humanity.

“There’s more urgent demand than ever for us to bring what we have from the space side, with partners on the terrestrial side to work on these...solutions and really bring them to use,” said Hansen.
Food Food Insecurity Food Shortages Space

1
Have yourself a plant based holiday
2
Affordable and delicious food in London
3
How you think about food can change your mental health
4
London Cares Curb Hunger food drive collects over 75,000 pounds of food
5
A Foodie Tour of Fanshawe's London Campus and Beyond

Should Londoners have chickens in their backyards?