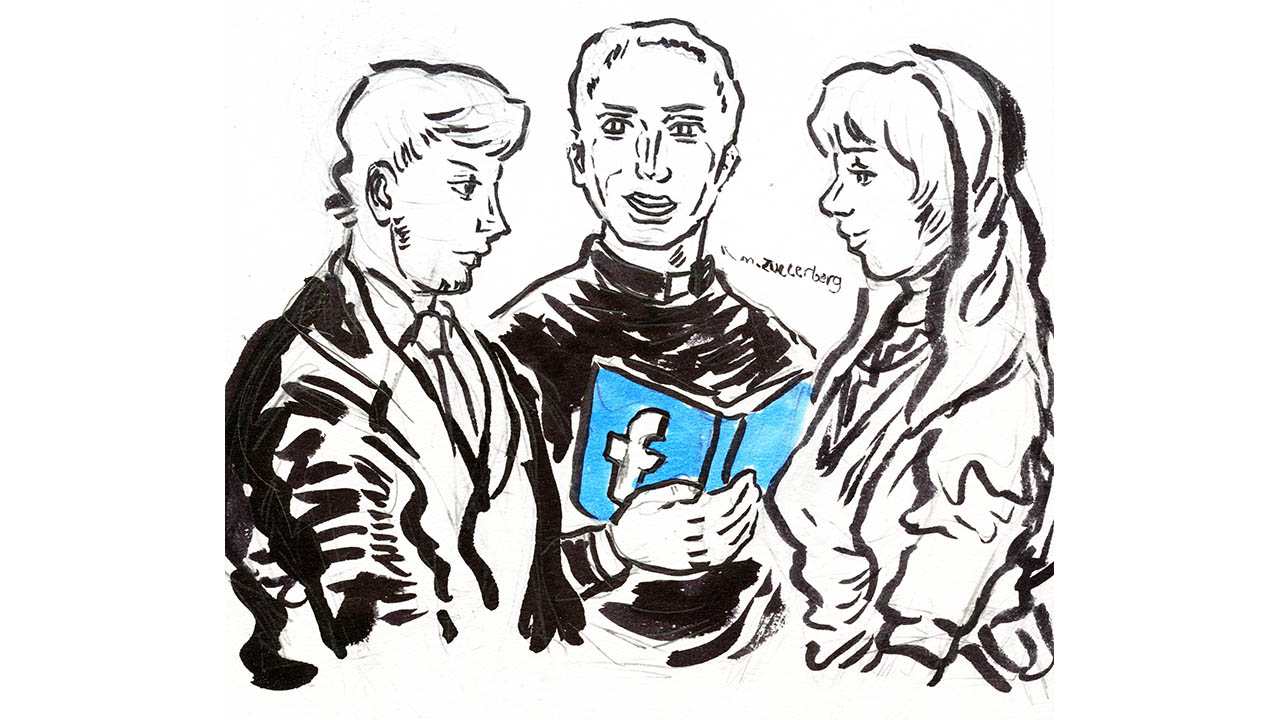 Credit: DYLAN CHARETTE
Social media is chock full of pictures for wedding inspiration, but sometimes the elements of a dream wedding are hard to reach.

Creating a dream wedding board on Pinterest, scrolling through Instagram to feel inspired by wedding décor, attire, and ceremony trends, and sending Facebook event invites for Stag and Does are some of the ways social media influences weddings and expectations of the brides, grooms, and guests.

Mekia Pembleton, a Fanshawe College law clerk student, rang in the New Year as a bride-to-be. She was at a family party when the clock struck midnight and a guest showed her a photo of her fiancé standing behind her while holding a sign that said “Will You Marry Me?”

Already, Pembleton learned everything must be booked far in advance when planning the wedding. “Most places, you have to book your dates at least two years in advance if you want that venue,” she said. “The services — like the photographers and everything else — they’re pretty wait-listed if you wait too long.”

She saves ideas to her Pinterest wedding board, but doesn’t feel too much pressure to meet expectations. That being said, she knows the pressure for a picture-perfect wedding exists and at the extent it is because of social media— particularly Facebook.

“You see other people’s weddings and you see a standard that you have to hold yourself to, to have other people consider your wedding nice.” Pembleton said.

Interrobang spoke with some local wedding planners and a married student to find out just how much Facebook, Instagram, and Pinterest shaped weddings as we know them today.

To have and to hold off the wedding Pin-spiration?

Kassandra Kilback, a wedding planner with Unmistakably You Wedding Coordination and a Fanshawe College professor teaching special events planning courses like Wedding and Occasions, said social media can be useful for the initial wedding planning.

“There are a lot of ways you can positively use social media to expand your vision, to create a beautiful wedding day and to learn from others,” Kilback said. “But [it] definitely has a lot of cons.”

Facebook groups can connect couples to vendors, but asking directly on the group who is available can generate an overwhelming response from several vendors — with some directly messaging potential clients before even meeting. Instagram is flourished with vendors, especially photographers. However, there are copycat photographers with over-edited photos and/or poses copied from professionals. Sometimes, the copycat photographers will ask couples for a security deposit without meeting them or solidifying a contract and then eventually shut down their social media, but keep the couple’s deposit.

“That has happened a few times, unfortunately. It doesn’t happen often, but it does happen.”

Pinterest can visualize the first steps of wedding planning. Couples often show the Pinterest wedding boards during the first meetings with Unmistakably You, which also involve the budget. That said, saving too many ideas throughout the process, even after booking vendors, can be overwhelming and confusing for the couples. The couples working with Unmistakably You will change their ideas from their engagement to six months before the wedding.

She recommends ending the social media search once the vendors are booked.

Ally Lightfoot, who runs Perfectly Designed Events, noted on her website she has a love/hate relationship with Pinterest.

“There is literally everything you could ever dream of on Pinterest which is amazing for my clients when they are looking for inspiration,” she told Interrobang in an email. “What I don’t love is that unless you are a wedding professional it is nearly impossible to determine what is possible and what is not possible in your specific area.”

For Lightfoot, it’s the most apparent in floral design. Nearly every couple she talks to adores peonies, but the flower is only regionally available in the spring and it’s difficult to tell the couples they can’t have it if it’s not in season.

Couples are also sometimes unaware that if what you see on Pinterest is not from a high-end wedding with the budget to cover it, it’s from a stylized photo shoot from wedding vendors.

Most of Lightfoot’s clients are part of the London Ontario Wedding Swap and Sell, where couples can buy gently used wedding items at a lower cost.

Amy McNall, founder of Unmistakably You, told Interrobang in an electronic interview that social media can also oversaturate wedding trends. A few years ago, every wedding appeared to use wood slab centrepieces and runners made with burlap and lace. Now, it’s all about the greenery garland centrepieces.

“Both Pinterest and Instagram are great for getting ideas going, but I particularly love it when a couple likes an image, and then we figure out a way to personalize it and make it their own.”

Although Facebook can lead couples to wedding vendors, not every vendor is on Facebook and not everyone knows the realistic cost of vendors.

“I often see posts from couples seeking an ‘affordable’ photographer, or a venue that ‘won’t break the bank,’” McNall said. “The issue with statements like that is that what constitutes ‘affordable’ is different to everyone.”

She said the lack of awareness is no one’s fault, as couples planning their wedding are usually planning for their first wedding and don’t know what they don’t know. However, searching for ‘affordable’ vendors via Facebook could mean missing out on the perfect vendor for the wedding.

Facebook can efficiently inform guests about Stag and Does, wedding showers, weather-related wedding changes, and even the wedding date itself.

“Despite the fact that sending ‘Save the Date’ pre-invitations is currently trendy, the presence of social media realistically means that most guests already know the date and location of the wedding anyway,” McNall said.

Wedding hashtags, Kilback said, wouldn’t be so common without social media. Shared photos are compiled with the wedding-specific hashtag, and the wedding photographers won’t have to stay as long if guests post photos and videos of the first dance.

However, some guests will post photos of the wedding too quickly. Photos from the procession will be posted before the couple is married, for example. While most people know better than to post photos on Instagram of the bride in her dress before the ceremony begins, Kilback said it has happened before.

“She’s in her dress and she hasn’t even walked down the aisle yet, which means her partner hasn’t seen her or her friends and parents haven’t seen her dress yet, but she’s already on social media.”

Couples can host unplugged weddings where only the hired photographers and videographers take the photos — but even with signs posted around the venue and a reminder from the officiant, people still take photos and get in the way. Kilback added that despite telling her family and friends that she hired professionals to capture the moment, guests still took photos. Even some of her wedding photos captured guests using their phones during the ceremony.

“It’s something we constantly have to remind people that you need to be in the moment and you need to actually see the moment as opposed to watching through your phone,” she said.

Since it has become such a problem, however, viral photos of guests butting in and using their devices to capture the moment have become PSAs to stay out of the way of photographers and videographers.

From pinning to walking down the aisle: One student’s experience with social media’s influence on weddings

Kerryann Thomas Black, a public relations and corporate communications student at Fanshawe, has been married for five years and said social media influenced a lot of her wedding.

“I saw things on social media that I wanted. I’d go to my decorator and she’d say ‘This is what it costs’ and my husband — well, my fiancé at the time — would say ‘We can’t afford that,’ but I was like ‘But this is what I want, I want it to look like this,’” Black said. “You see all the things on social media. You see all the fairy tale, all those dreams, all those glitz and glamour, and I’m like ‘This is what I want,’ so of course it had an influence on how our wedding looked and the cost [that] was spent ‘cause I wanted something that was close to that.”

She said social media help you visualize your dream wedding and show your wedding planner your goals. However, social media can make wedding planning challenging and sometimes, disappointing, when realizing you can’t afford what you want.

“I remember when I went to a wedding planner, and I went with all these pictures I had taken off of [social media],” Black said. “When she quoted the price I literally walked out of her office crying ‘cause I was so devastated. I couldn’t afford it but I wanted it to look like that.”

Although social media and the fairy-tale wedding day images found through it influenced Black and her husband’s wedding, their wedding also had their own personal touch. For any other couples getting married, Black said to enjoy the wedding planning journey and make sure the wedding represents you and your partner.

“You see things on social media that you want, but just ensure that it’s your story and that you’re able to afford what you want,” she said. “Even though it’s a wedding, at the end of the day, it’s all about the two of you.”
Marriage Pinterest Social Media Weddings