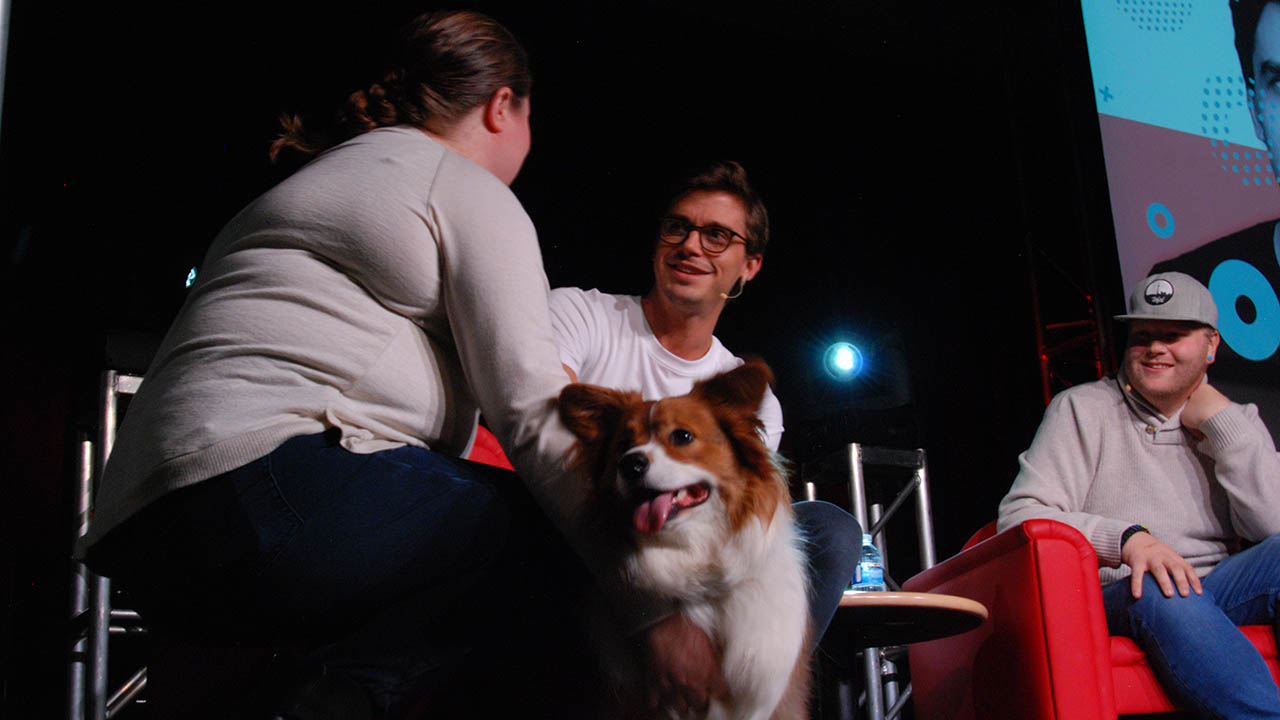 CREDIT: EMILY STEWART
Queer Eye star Antoni Porowski meeting his fluffiest fan, Gus the corgi. Fanshawe Student Union (FSU) advocacy and communications coordinator Chelsea Bancroft brought her dog onto the stage as a nod to when he was surprised with a corgi in a previous episode.

During the sold-out event, the food and wine expert of Netflix’s Emmy-award winning show Queer Eye spoke about his new cookbook Antoni in the Kitchen and how he works to change people’s relationships with food.

The event was previously scheduled for Forwell Hall, but was moved to J-Gym 3 to accommodate a larger crowd. About 20 minutes prior to the show, the line stretched from the gym all the way through to Oasis.

Earlier this fall, Porowski went on tour promoting his New York Times bestselling cookbook. He was surprised when many fans told him Antoni in the Kitchen was the first cookbook they ever bought, and acknowledged his role on Queer Eye plays a large part.

When writing Antoni in the Kitchen, Porowski was dealing with the end of a seven-year relationship and realized he made a lot of the food for his ex and his family. As much as he wants people to try the recipes, he would like them to read the book’s personal stories and reflect on their own narratives with food — be it the first meal in what he called “a really sad dorm room you got in college”, special occasion meals, or dishes enjoyed on first dates.

“Food has been at such important pivotal moments in all our lives and I think it’s such an incredible connector,” he said.

He connected food to a childhood memory during the cooking demonstration. Before asking an attendee to come up on stage and help him prepare a carrot salad with jeweled dates, ginger and honey vinaigrette, and toasted almonds, Porowski talked about his dad snacking on carrots and almonds soaked in lemon vinaigrette.

Noting that many people not in touch with their heritage have strong memories of traditional meals their grandmas prepared, Porowski also said food brings you closer to your heritage, which then helps with confidence.

“It makes you a more confident person because you know who you are and it changes the way that you enter a room and that you present yourself and I think it’s only something to be proud of.”

Porowski may be the culinary guru of Queer Eye’s Fab Five, but he doesn’t call himself a chef. Rather, he’s a home cook with a background in psychology.

“It’s just something that I really like, I know enough about and I’m deeply passionate about for a lot of reasons and that I’ve been practising for a lot of years,” he said. “It’s something that I just keep on learning, so I see myself as like a messenger. I love talk to chefs and I talk to somebody who is intimidated by chefs.”

Eager fans brought their copies of Antoni in the Kitchen hoping for autographs. Two students who spoke to Interrobang after the event didn’t get their copies signed, but still enjoyed the night.

Mackenzie Watt, a personal support worker (PSW) student who sat in the second row, is looking forward to trying the recipes.

“I’m hoping to try one of the desserts in the cookbook. I prefer to bake over cook,” she said.

Radio broadcasting student Alex Cunningham said Antoni in the Kitchen was the first cookbook he ever bought and he already made some of the featured dishes.

“I made the lemon squares from it, which were absolutely delicious,” he said. “I made the cauliflower rice just the other day and it was very good too.”
Antoni Porowski Dogs Fanshawe Student Union Food On Campus Events

1
Getting involved at Fanshawe
2
Resources available at Fanshawe
3
Books and barks: Do they mix?
4
Fanshawe fashion show promotes sustainability
5
A Foodie Tour of Fanshawe's London Campus and Beyond