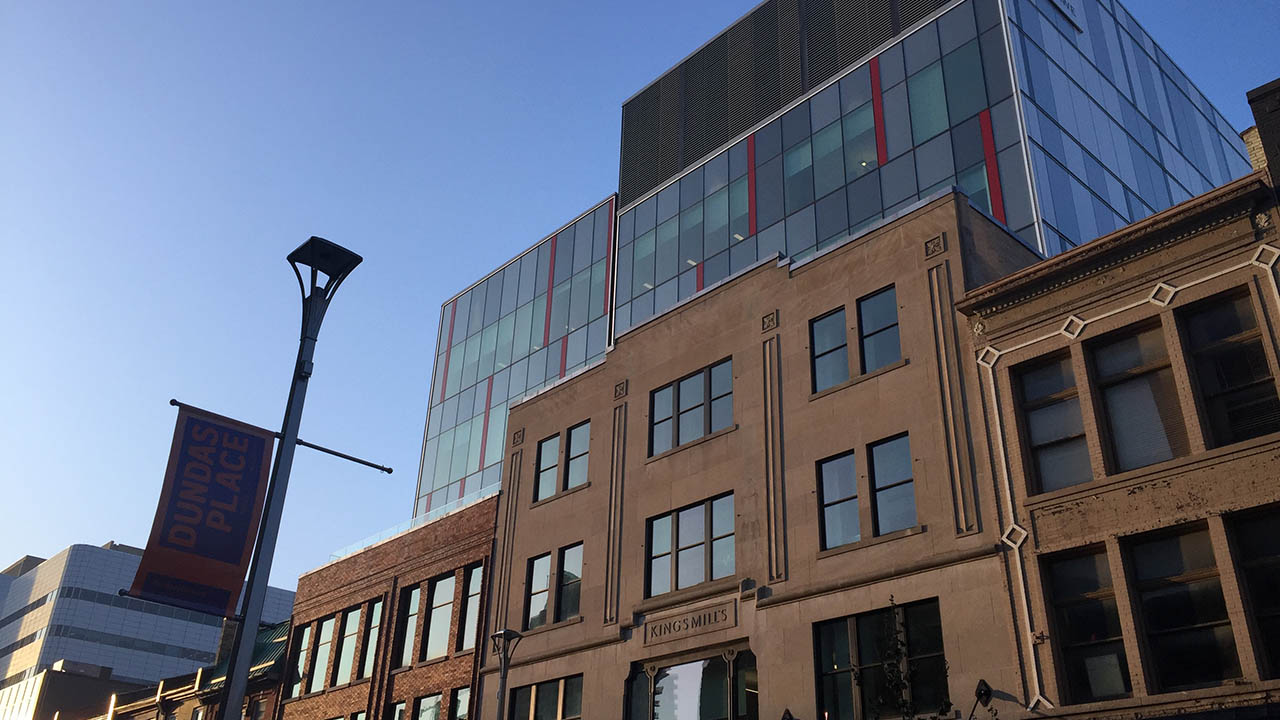 CREDIT: HANNAH THEODORE
The designers of 130 Dundas Street kept many of the original features of the Kingsmill's building, including the iconic facade.

Just over one year ago, Fanshawe opened the doors to its newest downtown addition at 130 Dundas St. Now, the team behind the design has been recognized with an Urban Design Award from the City of London for their innovative reuse of the former Kingsmill’s department store building.

The space was designed by Diamond Schmitt Architects and Phil Agar Architect and is home to Fanshawe’s Schools of Information Technology and Tourism, Hospitality and Culinary Arts.

Shawn Harrington, director of campus planning and capital development for Fanshawe College, was involved in the project since the beginning, and said he was thrilled when he found out about the win.

“It was a big project, and I think it has huge impacts on downtown,” he said. “It was very exciting for the design team to be awarded the prize.”

Making use of an existing space can be a challenge, and Harrington said the choice to include so much of the original architecture was always a key part of the design plan.

“We always anticipated maintaining that heritage façade,” he said. “We did retain many heritage features inside the current school. We kept one of the original elevators as an homage to the history of the building. We kept the pneumatic tube system that they used for sending bills to the sales office.”

The Kingsmill’s store always had a connection that lead to Carling Street, something Harrington said the design team worked hard to maintain. He said the choice to keep the connection played a large role in the Urban Design jury’s decision.

The building still hosts much of the original brick and wood beams maintained since the ’30s, as well as many small reminders of times gone by.

“Even the benches that were in the entranceway of the store that we would jokingly refer to as the husband bench,” Harrington said. “Where the husbands would wait for their better halves to finish their shopping. It was very important to maintain that history.”

Go to the bottom floor of the building, and visitors will find a painting of the store’s top furniture salesman, memorialized on an 800-pound elevator door.

As much as the building respects the history of the space, it also houses a wide range of state-of-the-art facilities, including new culinary labs and computer spaces.

Sustainability also played a major role in the design process.

“There’s a living wall within the main foyer,” said Harrington. “It’s a wall full of plants, which allows the air from the room to flow through the plants and get circulated through and clean the air back through the building.”

Special solar shading coats the windows in the upper portion of the building for increased energy efficiency, with unique designs to protect birds from flying into the glass.

At a time when the maintenance of downtown heritage spaces is being questioned (for instance, the Wright Lithographing building), Fanshawe’s addition to the downtown core proves that all these buildings need is a little attention to make them a part of the community.

Harrington said that Fanshawe is now more involved in downtown events than ever before, something that he said was also due to the completion of the Dundas Place flex street.

By connecting the past, present, and future, the designers of 130 Dundas have cemented Fanshawe’s place in the city’s centre for years to come.

1
Students share their thoughts on London's homelessness crisis
2
The benefits of working for Fanshawe as a student
3
Discover more at Fanshawe's main campus
4
Nshwaasnangong Centre opens its doors for Indigenous children and families
5
End of restrictions: Student Wellness Centre opens for all students