The evolution of video games 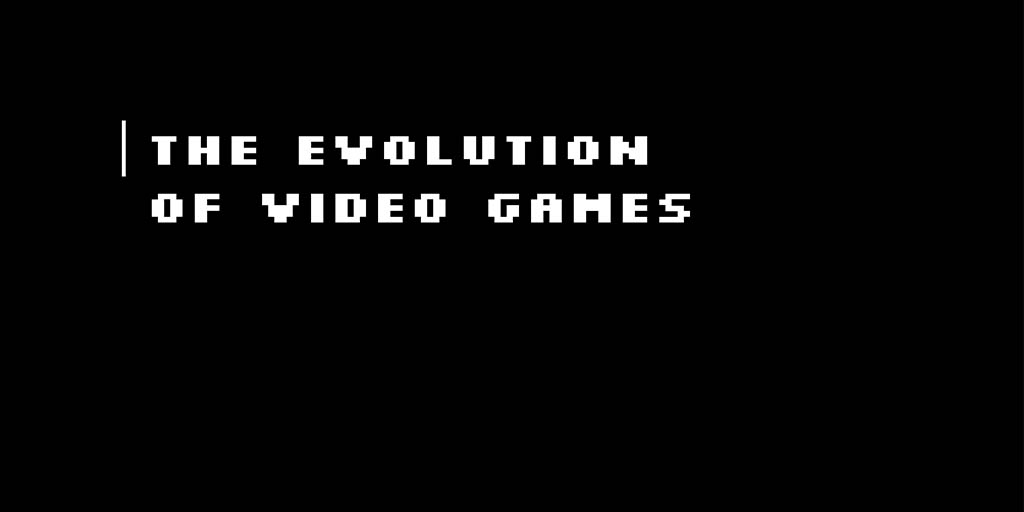 Video games have a rich history that has evolved over 60 years to become what it is today. Let us take a look at the evolution of such a diverse landscape.

The conception coming to life

The year 1940 marks the beginning of any concept related to video games when Edward U. Condon created a computer that played Nim, a game in which players tried to avoid picking up the last matchstick. Ninety per cent of the time the computer won. If the player managed to beat the computer they received a commemorative coin stating their victory.

William Higinbotham revolutionized the technology world in 1958 by announcing Table Tennis for Two, which is regarded as the first interactive video game to play against other gamers.

Arcade machines and consoles are born

Magnavox released the Odyssey in 1972, the first home video game system based on Ralph Baer’s “Brown Box” design. It is for this reason Baer eventually became known as the “father of video games.”

The company Atari Incorporated (Atari) built the first arcade machine, a cabinet that uses inserted coins to play the famous tennis like game of Pong.

In 1977 the announcement of Atari’s, Atari 2600, happened. A ground breaking game system that saved game progress to a cartridge and used joysticks to control. It set the standard of consoles for years to come.

Rise of the classics Versus the console wars

Pac-Man struck it off big in 1980 and is not only the first arcade game to be adapted for the Atari, but is also the first to have a character animated.

The Nintendo Entertainment System (NES) was revealed in 1985 as the first 8-bit console to come out and with its better graphics and sound capabilities, starts the advancement of game consoles.

The year 1989 introduced Nintendo’s Game Boy handheld system, becoming the most successful handheld of its time.

The Sega released their Sega Genesis with enhanced 16-bit graphics that same year, bringing about the birth of Sega’s mascot, Sonic the Hedgehog.

In competition with the Genesis, Nintendo produced the Super Nintendo Entertainment System (SNES) during 1991, sparking the flames for the console wars.

Due to violent graphics increasing in games, like Mortal Kombat, 1994 saw the creation of the Entertainment Software Rating Board (ESRB) to determine the age appropriateness of games.

In 1995, Sega came out with the first 32-bit console the Sega Saturn, while that same year Sony came out with the PlayStation (PS). Ultimately, the PS’s cheaper cost beat out the Saturn, putting a tight leash on Sega’s income.

The following year Nintendo brought out the Nintendo 64, with its 64-bit graphics and massively popular titles like Super Mario 64 and Legend of Zelda: Ocarina of Time. It is the last cartridge system to be produced.

Due to overwhelming debt Sega left the console business and became a third-party game developer only.

Sony began the 2000s by introducing the world to the PlayStation2 (PS2), the graphics of which revolutionize the gaming standard. With its DVD reading capabilities it became a massive hit with games such as Grand Theft Auto.

A year later, Microsoft revealed the Xbox, which featured both DVD compatibility and PC technology. Halo: Combat Evolved for the system rose to popularity quickly and was soon dubbed the flagship franchise of the console.

In 2003, Valve set up Steam, a digital distribution platform that opened up the PC gaming world even further by bringing a larger number of titles to one easy accessible place.

From 2004 to 2006 marked the release of four different consoles: The Nintendo DS, PSP, Xbox 360, Wii and PlayStation3. Of the bunch, the Wii is the most noteworthy. The console encouraged players to get off the couch to play games with its motion sensor remotes. Instantly a hit, the Wii sold over 5 million units by the end of 2007.

In 2008, Apple launched the Apple Store for iPhone, bringing about a game change to the mobile game scene.

The Wii U became available from Nintendo in 2012. It featured a separated touch screen pad, which is used as a remote for certain games. The system is one of the least liked among gamers.

In 2013, both Sony and Microsoft announced their newest consoles, the PlayStation4 (PS4) and Xbox One. Both brought hyper realistic graphics and high performance to a new level in the industry.

During 2016, the Google Play Store and Apple Store were hit with a wave of downloads with the release of Pokémon Go by Niantic. A free mobile game, it integrated AR technology with areas and movement to hunt down and capture the Pokémon of Nintendo’s famous game series.

March 3 2017, Nintendo released its newest creation, the Nintendo Switch. The first to ever combine a home console with a portable handheld, the Switch boasted higher graphics, optimal performance and could be brought with a player anywhere they go. This console sold out of preorders and back-ups in the first few days after it was announced.

The here and now

Gaming has moved from the basement to almost an everyday part of our culture. Technology has evolved far beyond what was possible 60 years ago.

VR isn’t a pipe dream anymore, but a reality. Realistic graphics are the norm, while having simple pixel graphics are a homage to the time of retro games. Bubble-popper mobile games have evolved to be comparable with game console works.

Nothing is the same as it has been and there will only be advancements from here-on-in.
Nintendo Sony Playstation Steam Video games Xbox

1
The best holiday-themed video games
2
How video game music evolved through the decades
3
Pandemic leisure: How students are filling their free time now vs. two years ago
4
Seven games you didn’t know were made in Canada
5
Leisure Suit Larry: A raunchy relic of the non-PC gaming age

Where to get comics and other geeky items