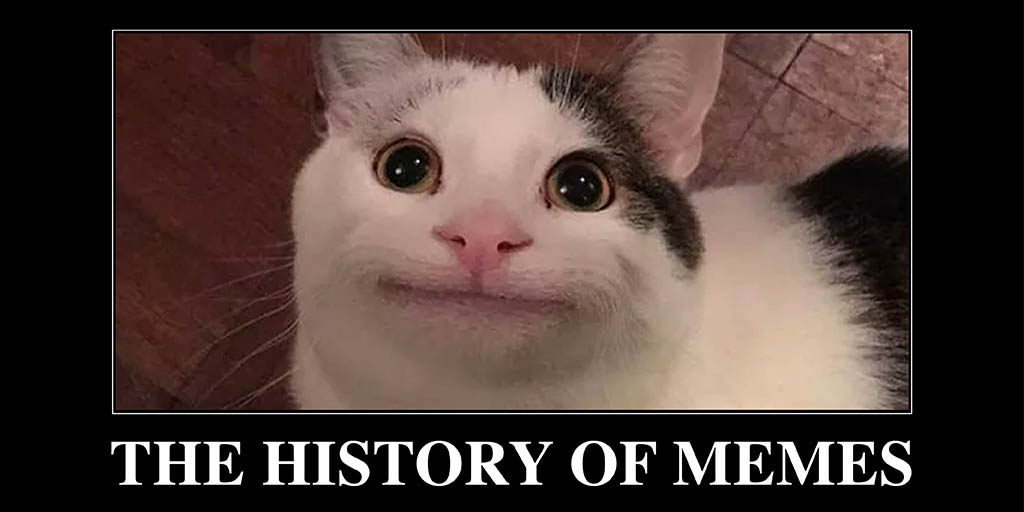 It seems impossible to go online without encountering a meme within the first minute of browsing. Whether you are a fan of them or not, one has to admit that the culture of memes has become an integral part of our society both on and off the web.

But where did this type of entertainment come from and how has it reached this level of popularity? Although the entire history of meme culture would take many books to cover, we've done our best to look at how this culture came to be and what's fueled it over the years.

The term meme was coined long before the first “internet meme” was created, by Richard Dawkins, in a book of his titled The Selfish Gene. He created the term to describe a behaviour in culture that is passed from one person to the next by nongenetic means. Nowadays however, the term “meme” is often used to describe a concept or behaviour that spreads through the internet and is embraced by a large community of people, usually for humorous reasons.

This type of entertainment dates back before the World Wide Web even existed, when people shared information through email and the Usenet, an early form of this type of technology. During this time the internet was primarily used for business, communication and research. However, users quickly found ways to create entertainment, primarily through the sharing of funny content on message boards or in emails.

Some early memes to spring out of this era through email chains and other means include The Dancing Baby, Peanut Butter Jelly Time and The Hamster Dance. ASCII Art was also a popular method of inserting humour into online communication in places where text was the only content that could be posted.

A noteworthy platform for sharing humour was The Usenet Oracle, now The Internet Oracle, which allowed users to ask questions for others to answer anonymously normally in a humorous fashion. Dating back as far as 1976, this service is seen as one of the first online collective works of comedy and a lot of the first online “inside jokes” sprung out of this medium.

The most popular and consistent format of internet meme is a captioned photo known as an image macro, usually featuring text on the top and bottom of the image. This is largely attributed to two online fads that were popular in these early days de-motivational posters and The Dysfunctional Family Circus. Both featured images with captions that had been changed to add a humorous tone. The latter meme found its roots in the pre-internet days, being distributed by mail and fax, starting in the late 1980s.

Interestingly enough, the internet's obsession with kittens can be traced back even further, to the 1870s when photographer Harry Pointer captured kittens in quirky scenarios then added funny captions to them. Greeting card companies followed this format and years later it was modernized by the internet community in the form of lolcats, featuring photos of cats with captions misspelled in a comical fashion.

Lolcats origins can be traced back to the controversial but extremely influential image board website 4chan.org. Due to the fact that 4chan had very loose guidelines on what could and couldn't be posted, this website's community became one of the earliest influencers in what the world now sees as the modern and off the wall meme culture. Some notable memes to attributed to this forum include Pepe The Frog, the extremely popular Rick Rolling meme and the pivotal Rage Comics.

Most people remember Rage Comics as poorly drawn Microsoft Paint style comic strips depicting relatable or hilarious scenarios, that garnered a large following in the early 2010s. But what people may not realize is how integral these were in taking memes out of the smaller more geek invested realms of the internet and pushing them into forefront of pop culture.

This was largely due to the same reason that the “top text, bottom text” image macros became so popular at the same time, ease of creation. With a number of online generators in place and the basic framework for the joke set in place, the creation of a new meme required very little effort or thought for the average person to throw together and they became yet another way for users to express themselves online.

YouTube's creation in 2005 was also important in pushing the concept of video memes and making them accessible to the everyday internet user. Until this time it was much harder to share videos on the internet and the only memes that really existed in this format were simple flash animations and or animated gif images. Now anyone with a digital camera could create and distribute funny or relatable videos to millions of viewers with hardly any work at all.

This over saturation of content led to a surge in websites such as icanhas.cheezburger.com, 9gag.com and funnyjunk. com with the sole purpose to post funny content and memes. As there weren't any major copyright laws around meme creation, these sites often reposted content from various sources around the web. Meme geeks in turn became passionate about supporting websites and creators that posted original content and the need for fresh material grew.

Because of this, internet culture was pushed into its current environment where jokes get old in a matter of days and people are consistently coming up with new memes or reworking old ones in new ways to avoid them from getting “stale”.

Memes are now a massive part of everyone's lives and have a big influence on society that we live in. Due to their satirical nature, they have the ability to subtly affect one's view on culture, politics and major world events. Whether this is a good thing or not is up to the individual reader to decide.
Comedy Internet Memes Social Media

The evolution of video games

Anime's inception and journey across the seas