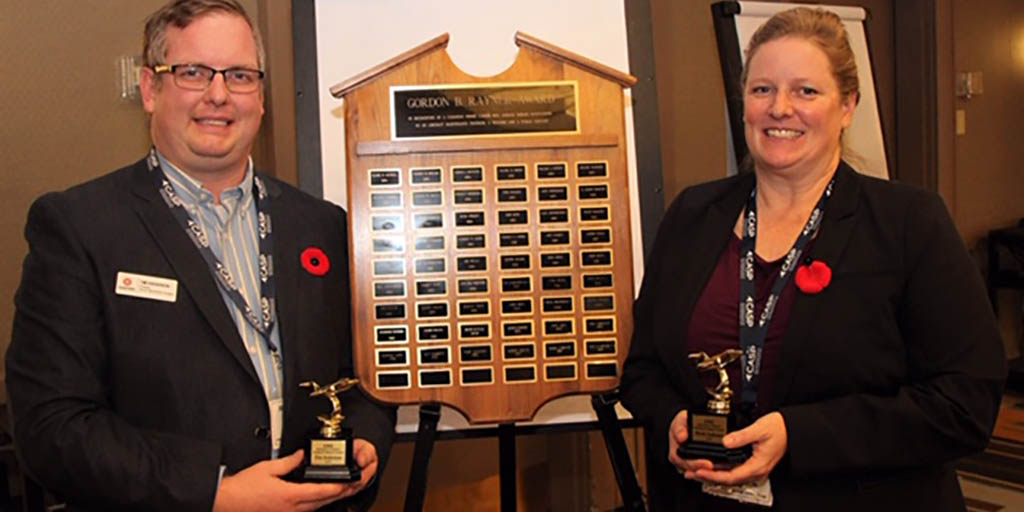 Fanshawe's Nikki Anderson (right), won the Gordon B. Rayner award for her contributions to the aviation industry.


Nikki Anderson, along with her husband Tim Anderson, were awarded the Gordon B. Rayner award for their contributions to the aircraft maintenance industry on Nov. 8, at the annual Aircraft Maintenance Engineer (AME) conference held in Mississauga, hosted by the AME Association of Ontario. The duo are professors at Fanshawe’s Norton Wolf School of Aviation Technology.

Anderson is the first woman to win this award since its inception in 1975.

According to the AME Association of Ontario, the award is given out to “a Canadian whose career will always remain outstanding as an aircraft maintenance engineer, a teacher, or a public servant”.

Anderson said that the AME Association of Ontario noticed her and Tim’s active contributions to the aircraft maintenance industry, especially now that they both teach the trade as well. She said that a lot of people know the duo because of their contributions to the publication, Canadian Aviator, as well as Wings magazine, a well-known aviation magazine in Canada.

“It was such an unexpected honour. When they called to tell us we had won this award, we were kind of like ‘are you sure?’,” Anderson said in a phone interview with Interrobang.

The meaning of the award was especially important to Anderson, as a woman in a male-dominated industry.

“Normally Tim gets most of the credit because he is a man and also because he has done a lot of really cool stuff and he should be recognized. However, I thought that it was really cool that they recognized us together as a team,” Anderson said.

Anderson said that the AME conference provides a sense of cohesion between her and other aircraft maintenance engineers. She has been attending the conference for 10 years.

“I originally got into [the aviation industry] for the flying aspect of it,” Anderson said. “I started flying right away, getting my pilot’s license. My first job was shuttling customers to and from their respective landing strips and air field.”

When Anderson was about 23, she started “turning wrenches”, as a mechanic. She said she found that she enjoyed it even more than flying.

Presently, Anderson and her husband run the same company that her dad purchased all those years ago, now called Anderson Aviation Services Inc.

Anderson said that she saw a very small number of women working in the industry the first few years of her career. However, as her career continued, she saw more women slowly joining the field. Now, as a professor, she said that eight to 10 per cent of her students are women and that percentage rises each year.

“I think being one of the first faces [female students] see is probably encouraging,” Anderson said.

Anderson said she believes that even though aircraft maintenance is a male-dominated industry, women can still succeed.

“Women are good at this job. I don’t think most people think of it as a career when you’re a young girl because society doesn’t really point you in those directions,” Anderson said.

Anderson said that she ensures she buys both a mix of traditionally male and female-targeted toys for her five-year-old daughter so that “she knows she can be an astronaut if she wants, or be a mechanic if she wants”.

Anderson encourages anyone who is interested in the program, especially women, to apply.

“I really identify with the kids that come to school here and I think that a lot of the problem is that people think they have to know [a vast knowledge of tools] to learn this, but the real fact is that you can teach all of that. What you can’t teach is a positive attitude, work ethic or how to care about the job. If you’ve got those abilities, you can totally do this, this is a job for you,” Anderson said.