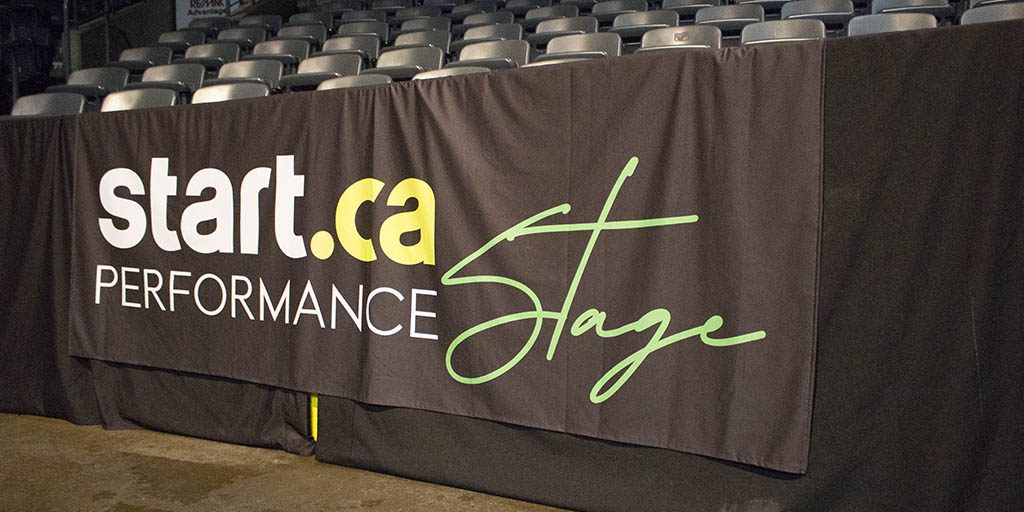 As of Dec. 1, Budweiser Garden's smaller stage will be named the Start.ca Performance Stage.


Internet and cable provider Start.ca has taken over the naming rights of the Performance Stage at Budweiser Gardens from RBC.

Budweiser Gardens general manager Brian Ohl, of Spectra Venue Management, and Start.ca marketing manager Janet Smith announced their organizations’ new partnership during a press conference on Nov. 27, while standing atop what will be the Start.ca Performance Stage.

The smaller venue within the largescale arena was designed to accommodate touring Broadway shows and small concerts, and can seat up to 4,000 people. It has previously seen 17 seasons of the Broadway in London series, a performance from the band Our Lady Peace, Just for Laughs specials, and Peppa Pig Live! family shows.

Ohl said that Budweiser Gardens prides itself on offering a more intimate setting for specific acts.

“Promoters on the theatrical side are more interested in it, because in arenas you typically can’t do some of the Broadway that we do. The concert promoters love the configuration because it gives us another venue within the venue to host a show that might not sell 8,000 tickets,” Ohl said.

Ohl said that the stage benefitted London by providing another venue to attract more theatrical and musical acts.

Start.ca is a London-based business that has grown over the past two decades to serve Ontario and parts of Quebec. “Being involved is one of Start.ca’s core values, and as a local London business, it’s important for us to give back to the community,” said Peter Rocca, President and CEO of Start.ca, in a Nov. 27 press release. “The Start.ca Performance Stage is a great way to introduce our company to a new audience, and we look forward to doing our small part in bringing great entertainment and cultural events to London.”

Rocca is also a Fanshawe graduate and was one of the College’s 2017 Distinguished Alumni Award recipients.

While speaking with the press following the announcement, Smith added that Start.ca is excited to be extending its presence into London’s entertainment industry.

“The theatre and arts is an important part of any community, especially here in London with Bud Gardens being here. We do a lot of sports advertising and sponsorship to date, so it’s nice to be able to hit more people,” Smith said. “For Budweiser to think of us as such an integral part of London and to feel like we have a strong enough brand to put up on their banners, that is a huge compliment for Start.ca.”

Neither Ohl nor Smith would say how much the sponsorship deal was worth. Smith did say that Start.ca intended to utilize its option to renew the agreement at the end of its five-year period.

The name change officially takes effect on Dec. 1. The first performance on the Start.ca Performance Stage takes place on Dec.4 with a show by Paw Patrol Live! The Great Pirate Adventure. Other acts in the stage’s lineup include Paul Brandt with High Valley, Colin James, John Cleese and the 2018-2019 Broadway in London series.