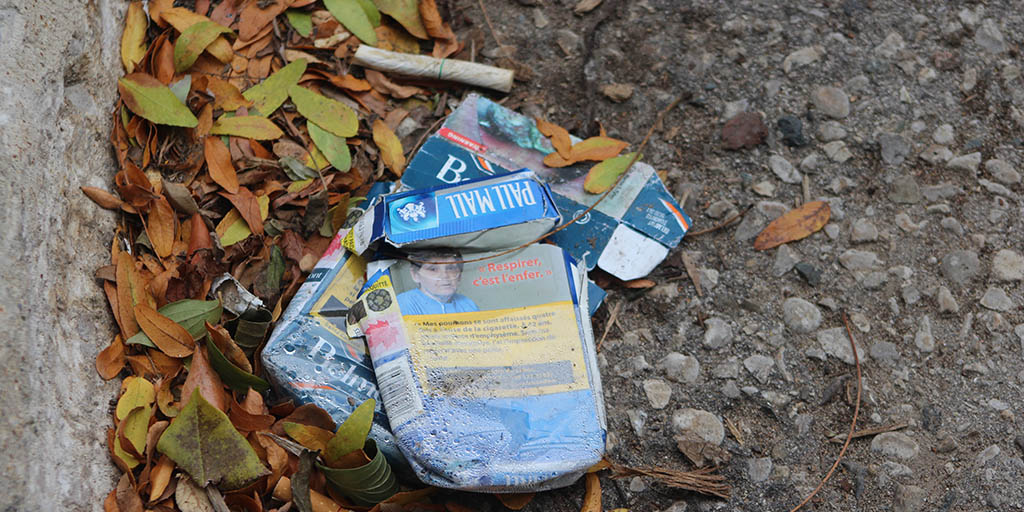 Littering cigarette butts and packaging can have a harmful impact on the environment.


As staff and students adjust to Fanshawe’s new smoke-free policy, effective Nov. 1, it is important they be mindful of where they pitch their butts.

“Cigarette butts increase the landfill, contaminate the waterways, poison the marine and freshwater organisms, and hurt the human wellbeing,” Michelle Cong, Fanshawe’s sustainability co-ordinator, said. “Please be mindful to others while smoking cigarettes, and carry your cigarette wastes with you until you find a disposal receptacle.”

Cong said that the environmental impact of cigarette butts is highly detrimental.

“Canadians drop 8,000 tonnes of cigarette butts each year — the majority within a mere 10 feet of an ashtray. It was reported that cigarette butts comprised from 25 to 50 per cent of all collected litter items from roadways and streets,” Cong told Interrobang.

Contrary to popular belief, cigarette butts are not compostable or biodegradable. They are actually 95 per cent composed of cellulose acetate, a plastic compound.

Cigarette butts break into smaller pieces when they are wet, only to leach their chemicals into the environment.

According to a 2017 report published by the World Health Organization (WHO), cigarette butts are the largest type of litter in the world.

They contain 7,000 chemicals such as ethyl phenol, arsenic and heavy metals. At least 50 are known human carcinogens, while others have been found to be toxic to marine and freshwater systems and animals.

The WHO’s report also mentions that “in addition to tobacco product waste, there are other waste products associated with tobacco use such as the two million tonnes of paper, ink, cellophane, foil and glue that are used in tobacco product packaging. This waste ends up everywhere, including on our streets, and in our drains, rivers and other aquatic environments.”

If someone who smokes is unable to find a receptacle, there is an alternative to flicking their butt onto the street.

Pocket ashtrays can be bought on Amazon.ca, or purchased through specialty sites like myashtray.com. These anti-litter devices store cigarette butts in a clean, fireproof pouch until they can be thrown away properly. They are inexpensive and effectively lock in odours.

Before the smoke-free policy, Fanshawe placed numerous cigarette butt receptacles throughout the College’s designated smoking areas. These receptacles were regularly emptied and their contents were shipped off to a specialised recycling facility called TerraCycle, where the plastics from the butts would be turned into items such as park benches and playground equipment.

Even though smoking is no longer allowed on campus, Fanshawe will still be providing cigarette butt receptacles in designated locations surrounding its London campus, Kestrel Court, Y and Z Buildings, and Simcoe/Norfolk Regional campus.

The College has confirmed that it will continue to recycle the butts collected in the perimeter canisters.

Maps of the receptacle locations can be found under the Corporate Info section of Fanshawe’s main website.