Letters and Arts Reading Series kicks off with Duncan McCue 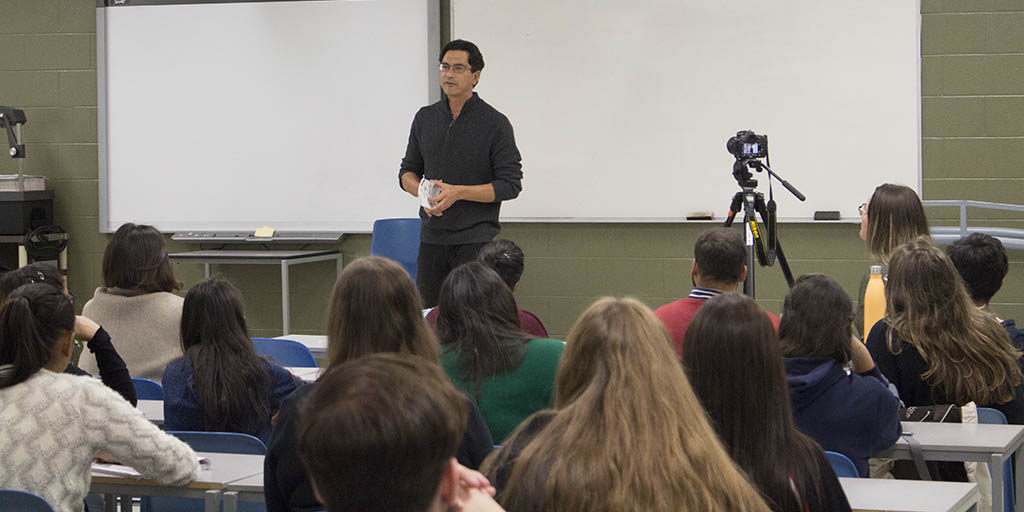 CBC radio host and journalist Duncan McCue spoke earlier this week to a full room of students about his book The Shoe Boy: A Trapline Memoir.

His appearance at the College was part of Fanshawe’s long-running Letters and Arts Reading Series.

Facilitator and Language & Liberal Arts professor, Calum Cunningham, said that the series’ mission is introducing students to authors like McCue.

“Students will be exposed to a variety of different voices in Canadian literature, and different versions of Canadian identity. It’s always worth an hour of sitting listening to someone tell amazing stories,” Cunningham said.

The Shoe Boy recounts McCue’s life as a 17-year-old spending five months on a Cree hunting excursion in northern Quebec.

As a child, McCue had been raised in Peterborough by his white mother and Anishinaabe (Ojibway) father. His family moved to the James Bay Cree (Nation) village, Chisasibi, when he was 12, but he spent only a year there before going to boarding school in the south of Ontario.

However, the brief exposure to the Cree way of life made an impact.

“Moving up there as a kid was a real culture shock for me because I went from being the only Native kid in my school to being called ‘white man’ by the Cree kids because I only spoke English. It was a real eye-opener and an education for me because I started to learn how to hunt as a teenager – I started goose-hunting and ptarmigan hunting. By the time I graduated high school I wanted to get more of that,” McCue said.

McCue said he chose to join a Cree family on their trapline hunt after he graduated high school. For him, going on the trapline was a lesson not only in surviving off the land, but in knowing who he was in terms of coming from a mixed cultural background.

“It was very difficult for me to come to grips with what I didn’t know and to try to struggle with my Indigenous identity. There were times that I felt ashamed and frustrated and discouraged by my lack of ability. That was a really big struggle for me, to try to become part of this culture that was mine but not mine,” McCue said.

Years later, McCue said he found himself reflecting back on the experience as part of an exercise in a creative writing class at Stanford University. The assignment was to write about a teacher who had had a profound influence on his life.

He instantly thought of Robbie Matthew Sr., the patriarch of the family he had spent those five months with.

“I had been telling stories about that time that I had spent with family and friends, but I had never sat down and written about it before,” McCue said. “I wanted to unpack why it was such a formative experience for me and why some 30 years later, those lessons seemed so powerful to me.”

McCue said that he hoped urban Canadians who read The Shoe Boy will come away with a stronger appreciation of how important connecting to the land is for Indigenous communities.

“The land is woven into the daily lives of the James Bay Cree. Even when they’re not living out and trapping and hunting, it’s woven into their culture and expressed every day. I wanted to give readers a sense of that and what it’s like to have that deep, deep connection to the natural world,” McCue said.