STDs and STIs: What to watch out for and how to get treated 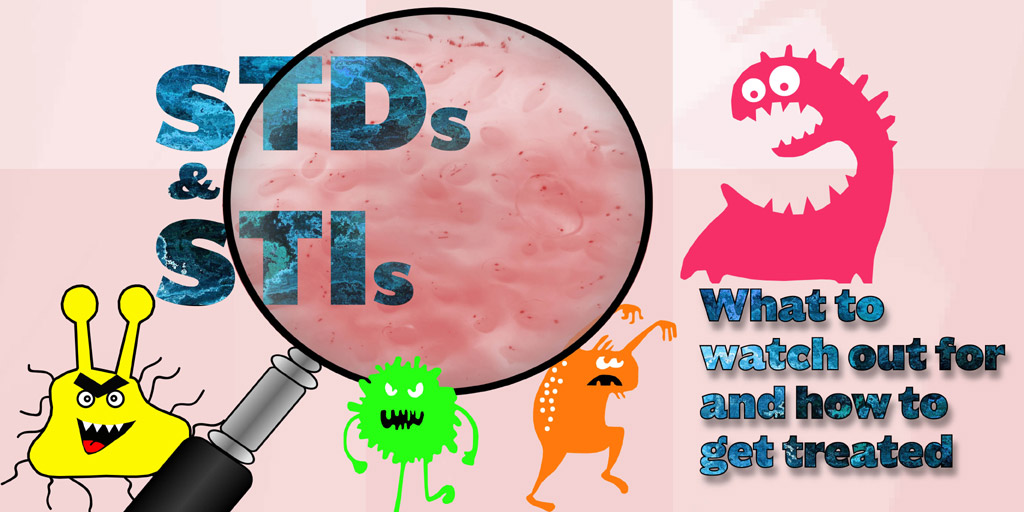 What is an STI/STD?

A sexually transmitted infection (STI) is an infection that is usually transmitted through unprotected sexual activity. There are various types of STIs, some minor and others extremely severe. If untreated some STIs may develop in to a sexually transmitted disease (STD), which could have life-altering effects if not properly cared for. It is important to stay educated, tested and safe in order to avoid such cases. Below is a list of those that are most common along with symptoms that show up if you or your partner contract an STI/STD.

According to Sexual Health Ontario, “chlamydia is the most commonly reported [STI]”. Symptoms can include pain during urination, painful sex, and swelling or pain in testicles; as well as itching, discharge, irritation and bleeding from sexual organs, after sex. Unfortunately, more often than not, those infected may show no signs or symptoms. If unnoticed and untreated it can cause infertility or can be passed onto a child causing pneumonia or eye infections. If tested and found, it can be treated with antibiotic pills.

According to Sexual Health Ontario “gonorrhea is a sexually transmitted infection (STI) caused by bacteria that affects both men and women.” Symptoms are similar to that of chlamydia with the addition of abnormal bleeding between periods and a change in vaginal discharge with woman, as well as a white, yellow or green discharge in men. However, signs don’t usually appear for two to 10 days or more. Gonorrhea can also be contracted and appear with similar symptoms in the throat or anus. This STI can also lead to infertility and be passed along to a child possibly causing blindness in a newborn. Antibiotics are available to treat gonorrhea, however, antibiotic-resistant gonorrhea is currently an issue worldwide.

This is “caused by the Herpes Simplex Virus. There are two main types of the virus. The first typically causes cold sores on your lips and the second often infects the genital area”, states the Sexual Health Ontario website. It can be contracted by intimate skin to skin contact, with no symptoms for two to 21 days after. These signs may take the form of blisters in and around sexual organs which may bleed easily, fever, pain in the joints, flu- like symptoms, pain with urination, itching, tingling or enlarged and tender lymph nodes. Cold sores on lips can also become genital herpes when passed to a sexual partner through oral sex. This is a chronic infection, meaning it never fully goes away with outbreaks possibly happening regularly. Although some medications exist to help heal sores, there is currently no cure.

This is caused by bacteria and “it can damage your body’s major organs over time and needs to be treated right away”, according to Sexual Health Ontario. Symptoms may not appear for three to 90 days, if at all, allowing it to be quickly and unknowingly passed on. Early on, the only symptom may be an open sore or ulcer which is painless but can lead to rashe on the palms of your hand, the bottom of your feet, fever, swollen lymph glands, sore throat, patchy hair loss, muscle aches, fatigue and flat grayish-white sores in mouth and on genitals. After this, syphilis may seem to go away and no visible signs may appear for the next 10 to 30 years. However, according to Sexual Health Ontario, if untreated, during this time “syphilis can do the most damage to the body, affecting the brain and nervous system (neurosyphilis), blood vessels, heart, bones, and eye (ocular syphilis)…[and] can eventually lead to death”.

Sexual Health Ontario sates that “hepatitis B is a highly contagious virus that can cause a serious infection of the liver”. Symptoms include fever, fatigue, nausea, dark urine, loss of appetite, pain in abdomen, clay-coloured stools and jaundice. “Some people with hepatitis B never get symptoms and may fight off the virus without realizing they had it,” reads Sexual Health Ontario. However, you may still pass it onto others and three to 10 per cent of those infected may have it for life, possibly developing liver cancer. It is important to receive a Hepatitis B vaccine in order to protect yourself from the virus, as no treatment exists to kill it after contracting it.

This infection “is a blood-borne infection, which means the virus must be carried in by blood to enter your body”, according to Sexual Health Ontario. Mild and serious cases of this virus exist. Some people may not show symptoms for 10 to 20 years. Symptoms can be similar to Hepatitis B with the addition of nausea, vomiting and sore muscles or joints. Unlike Hepatitis B, no vaccine is available, but treatment does exist. If untreated, some develop Chronic HCV, which can later develop into cirrhosis or liver cancer.

According to Sexual Health Ontario, “with daily HIV [Human Immunodeficiency Virus] treatment, is a long-term chronic condition”, and without treatment will “destroy immune cells until the damage to the immune system becomes more severe and eventually people develop AIDS (acquired immune deficiency syndrome)”. Early symptoms appear flu-like including a rash on the body and fever. It is only possible to contract or pass HIV through certain activities including unprotected sex, sharing of drug equipment and during pregnancy. If contracted, there is no cure but effective treatments do exist. If taken as prescribed, the medication that is available can allow those with HIV to live a long life with minimal HIV-related health problems and little chance of passing it on.

How to prevent it and where to get tested?

The best ways to avoid contracting an STI/STD is making sure you and your sexual partners are tested, using latex condoms, as well as dental dams and getting immunized. If you would like to receive more information and assistance in these regards, physicians are available at the Health Services Medical Clinic (Fanshawe, London Campus, Room J1004) on weekdays. The Middlesex-London Health Unit is also available, offering services, free testing and treatment for STIs, free pregnancy testing, emergency contraception, STI counselling and free condoms. More information can also be found at SexualHealthOntario.ca
Health Sex Education Sexuality STDs STIs

Sexting Etiqutte: The five rules to follow if you're going to "sext" that special someone