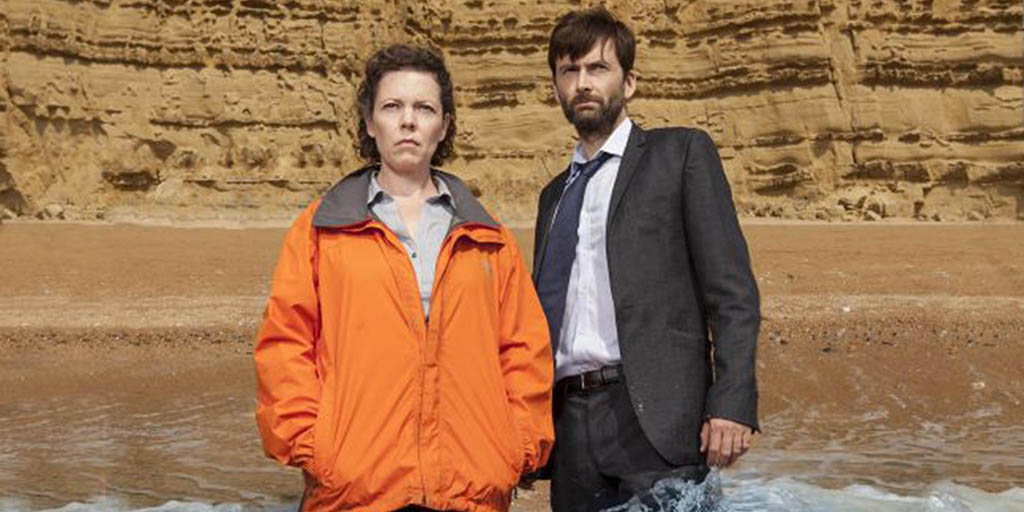 While episodic murder mystery television shows à la CSI and Criminal Minds will likely never leave our cultural landscape, there has been an uptake in recent years in the number of shows that take one season (or more) to solve a murder. Because as we know, a life-altering event can’t usually be wrapped up within a 44-minute episode.

BBC’s Broadchurch is a fantastic example of this style of television show. Set in the small town of Broadchuch, this show attempts to solve the murder of local 11-yearold boy Danny Latimer, whose body was found along the beach in this once idyllic town.

Everyone is a suspect, everyone has a motive and no one can be trusted.

Starring David Tennant, Olivia Colman, Jodie Whittaker and many more well-known British names, this show sucks you in from minute one and won’t let you go.

Long-kept secrets are revealed as Ellie Miller, a local detective and Alec Hardy, an officer brought in from out of town, while trying to outrun his own secrets, try and uncover clues to the murder that has shaken the entire town. As leads often turn out to be nothing, the pair struggle to cope with their failures while the pressure mounts to find the murderer from a town that cannot believe something so terrible could happen in their beautiful and peaceful village.

The premise of Broadchurch is, admittedly, a little predictable, but there is so much that makes this show stand out from all the others.

The acting is absolutely phenomenal. There were so many moments when I genuinely cried while watching this, and though I am an easy crier I don’t think I am alone in this.

One moment in particular stands out from the rest (warning: mild spoilers).

When Beth Latimer, played by Jodie Whittaker (who has also been cast as the new Doctor on Doctor Who), discovers that the body on the beach is her son, the raw emotion she portrays is haunting. Her performance on Broadchurch is breathtaking, and she is not alone. David Tennant wonderfully portrays how a man may cope with mental illness, since he is dealing with trauma from his previous case. The Latimer family are believable in their grief, which makes it that much harder to watch, but also that much harder to look away.

Another thing Broadchurch does exceptionally well is building its minor characters. Since the show is set in a small town, it has the opportunity to take its time and develop all the surrounding characters. We learn so much about each person that you really feel like you know them, which makes it difficult when you begin to suspect each and every one of them of the murder.

The cinematography is also worth mentioning, with the directors taking advantage of the beautiful surrounding area to make this show truly shine. With Broadchurch being a seaside village, the shots incorporating water or the beach are able to take you away from the horrible events of the show, even just for a moment.

The first time I watched the show I was shocked by the final outcome, but as I watched it the second time I realized that all the clues were right in front of me and I could have solved the mystery myself.

That’s one thing I hate about episodic murder mysteries; they usually don’t have enough time to provide you with enough information to come to the right conclusion on your own, forcing you to wait until you have to be told what the right answer is. In Broadchurch, you get a few clues each episode, a few that will throw you completely off course and some that will make you angry at yourself for missing them the first time around. This show really makes you think.

When it comes down to it, Broadchurch is a fantastically produced murder mystery show that will keep you hooked until the mystery is solved. Even then, you’ll still have questions, but thankfully for us, there are two more seasons after, giving viewers exactly what we want; more Broadchurch.
BBC Netflix TV Series

1
How to have a feminist March marathon
2
High School Musical: The Musical: The Series, the review
3
Mental illness at the Cecil Hotel: How Netflix unravels the mystery of Elisa Lam
4
Top LGBTQ2S+ shows on Netflix right now
5
Netflix Fix of the Week: Miss Americana

What Does Kerra Say?: Let's get real about gun violence