Students beat the heat during the FSU's residence games 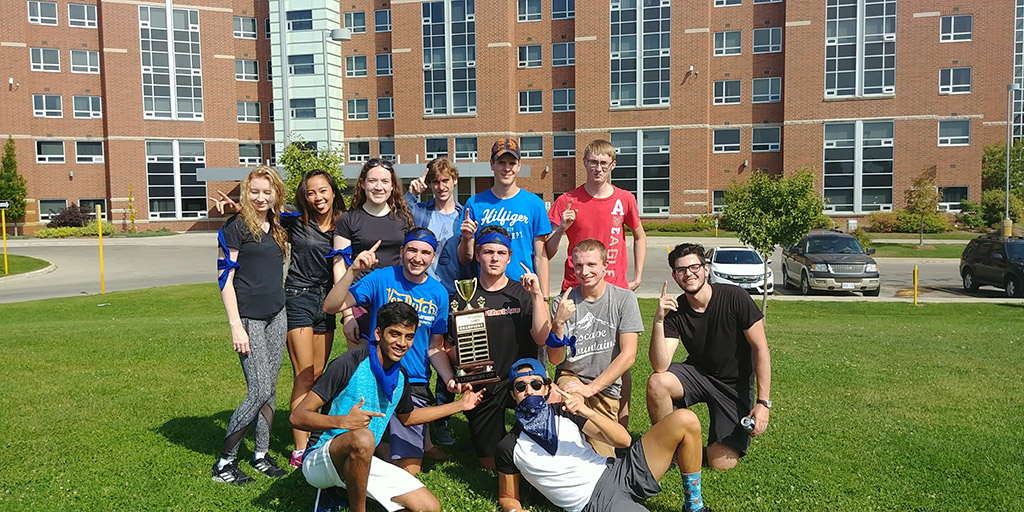 On Sept. 23, the Fanshawe Student Union (FSU) hosted its annual residence games. At the event, students from all four residences houses competed in fun-filled games to accumulate points to win the Lethbridge Cup.

The Lethbridge Cup was named after former Vice-President of the Fanshawe Student Union (FSU) Chris Lethbridge, who was also the individual responsible for creating the residence games four years ago.

The games took place at Merlin Field from 12:00 p.m. to 3:00 p.m. and roughly 30 students beat the heat while competing in fun-filled games including a three-legged race, hula hoop toss, tug-of-war, a balloon caterpillar run and many more.

“We reworked some of the games to make them more intriguing for students,” Kate Morris, Student Life Co-ordinator for the FSU said. Morris explained that for the tunnel chaser game, the students would army-crawl through arched pool noodles and have to leap frog back to the starting line.

As a result of the unexpected heat, the FSU supplied water to students to ensure everyone stayed hydrated throughout the humid afternoon. Also, the event received a higher participant turnout compared to last year’s residence games.

Students were encouraged to show up to the games wearing their house colours, which many did. The official house colours are red for the Falcon house, blue for the Merlin house, yellow for the Peregrine house and green for the Kestrel Court house. Both the Peregrine and Kestrel Court houses were short on participants, and as a result, teamed up to compete against the Falcon and Merlin houses.

Lisa Elliott, Finance Co-ordinator for the FSU, explained that the students showed their competitive spirit and had fun participating in all the events. Elliott said that she wants students to be enthusiastic and passionate about their residence house even after they graduate from Fanshawe. The residence games are a great way to help build that house spirit.

After an afternoon of laughs and competition, the Merlin house came out on top. The combined team of Peregrine and Kestrel Court took second place and the Falcon house placed third.

“The whole day was really cool. Everyone was really engaged,” Morris said. “The wheelbarrow race was really funny to watch. All the teams were cheering on their competitors and the support from each house was very neat.”

Participants concluded the games with some pizza and pop at the Oasis.

“One contingency we did not explore was the heat. We were worried that it would be cold but instead it was intensely hot. What I think we should definitely look at if we are having the event at the same time next year is having a plan for whether it’s hot or cold [that day],” Elliott said.
Fanshawe Residence Fanshawe Student Union On Campus Events

Reyno Rants - There's no bones about it, owning a pet can be ruff: Please think before taking one home