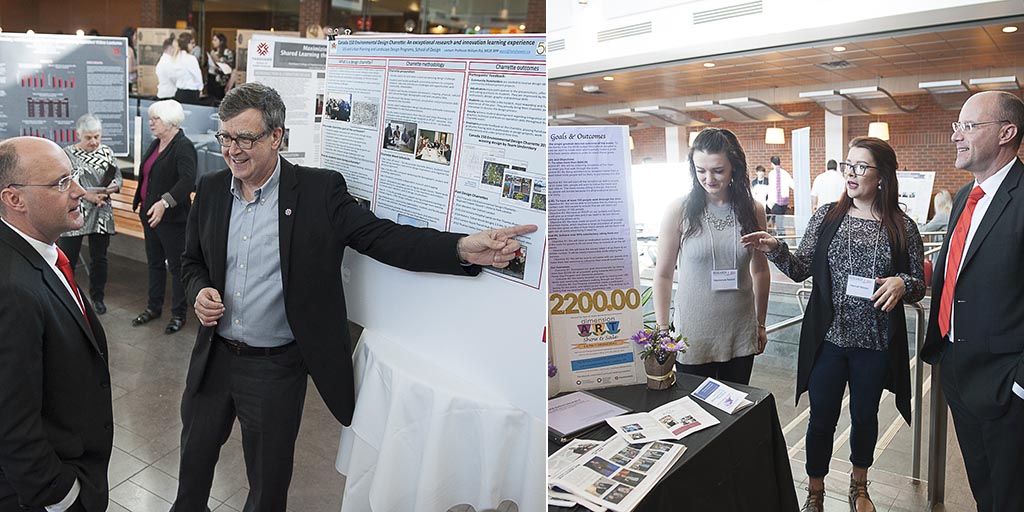 Fanshawe students, faculty, staff and some community members celebrated the work of a variety of different groups who presented their findings at the Research and Inno­vation Day on March 21.

The one-day showcase was a time for members of the Fanshawe community, as well as some outside individuals, to come together to see the research and innovation activ­ity happening at the college, said Stephanie Hernandez, outreach and events co-ordinator in the Centre for Research and Innovation.

On top of the student and commu­nity groups, there were 11 faculty projects that were also on display.

According to Hernandez, there were a few components of the day, including the students competing for a prize in four different catego­ries including industry, business, community and scholarship sec­tions.

Mayor Matt Brown and Fan­shawe president Peter Devlin were on hand taking in the hard work the participants were showcasing.

The projects themselves were cat­egorized not only by their focus, but also “their projected impact of the student research projects”, Hernan­dez said.

The day also included a keynote speech by one of the co-founders of GamerLink, a mobile app that lets gamers connect online for a better experience while interacting with others.

The startup was developed by two Fanshawe alumni, who won money at a previous Research and Innova­tion Day, which helped further en­hance their startup.

Hernandez, who’s been running the Research and Innovation Day for the past four years, and the lead co-ordinator for the past three, had positive thoughts about how the event went.

“Every year is different, there’s different elements, we get a differ­ent breath of projects so it’s always interesting to see and I find it’s con­tinuingly a learning process,” Her­nandez said.

According to Hernandez, the thing she noticed that was a change this year, compared to previous ones, was the increase in approved projects showcased at the event.

“It’s been a great upswing on the amount of activities that are hap­pening at Fanshawe and the amount that we can showoff and showcase,” Hernandez said.

Hernandez said that although there is no specific cut off mark of the amount of projects that can be included each year, there needs to be enough space for everyone, saying this year the event, which was in the James A. Colvin Atrium on campus, was roughly at full capacity.

Hernandez also said that the ap­plicants do go through a vetting process before being selected for a spot to showcase their projects. This helps to make sure each project fits well into one of the categories, and that there are no overlaps of projects or too many in one category, and to make sure there’s enough work that “constitutes an innovation or a re­search project”.

The process includes the applica­tions and projects being reviewed by a committee, including the dean of the Centre for Research and Inno­vation Dan Douglas, to simply make sure they are “meritorious enough to showcase”.

A few projects to highlight in­cluded the Synthetic Cannabinoid as Cancer Cell Therapeutic, which is about the therapeutic effect of synthetic cannabinoids on breast cancer cell lines, according to the event’s program pamphlet.

Another project was Dimen­sionArt Show and Sale in partner­ship with McCormick Home Day Program, which according to the program, looked at the need for de­mentia services within the commu­nity, and a third project was from Fanshawe faculty members, titled Canada 150 Environmental Design Charrette. This looked at an en­vironmental redesign process of a community project, according to the program.

In terms of funding, projects are able to receive $100 worth of help, which can help put together large posters for example, while the Fan­shawe Student Union (FSU) has also been a strong advocate for the day as well helping in terms of fund­ing and sponsoring the program.

FUS president Carlie Forsythe, who was judging for the second year, this time in the community sectioned projects, was enthusiastic regarding her experience.

“Judging is just a fantastic expe­rience, you actually get to see what a lot of our students are researching, what projects they’re working on, a lot of them are capstone for their programs, so it’s actually quite a big deal and I think the research is final­ly starting to get on par with almost university level,” Forsythe said. “It’s actually really awesome to see and I love supporting that kind of event.”

Forsythe was able to see a number of projects, including a table based on feminism and one from the bach­elor of interior design program who also touched upon some sustainabil­ity with their design and research concepts. She also enjoyed those that focused specifically on sustain­ability, but expressed the event itself was overall an important one.

“I think in kind of the time that we’re in right now, I think support­ing research and innovation is ex­tremely important. It helps keep our competitive advantage up as well among other colleges and univer­sities because we’re kind of in the middle of all of them right now, so I think that definitely helps and I think the quality of assignments that we’re seeing and quality of presen­tations that we’re seeing is steadily increasing.”
Fanshawe College Innovation On Campus Events

Paramedic students donate 560 pounds of food to The Sharing Shop