Fanshawe makes highest contribution to United Way in its history 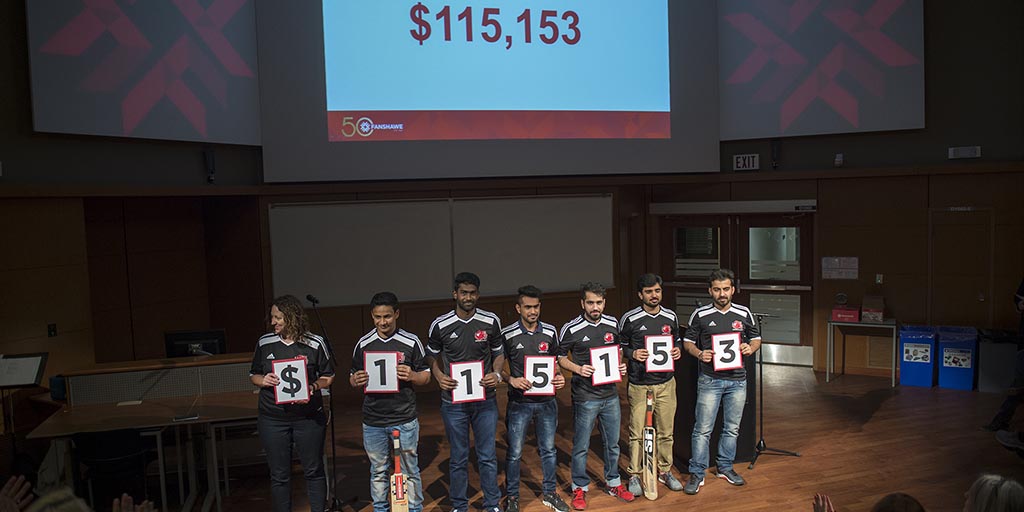 On Feb. 23 at a staff meeting, Fanshawe president Peter Devlin announced that Fanshawe had exceeded its United Way campaign goal.

The goal was set at the beginning of the campaign in September 2016 and was exceeded by over a few thousand, reaching a record-setting $115,153.

The Fanshawe extramural cricket team were the ones to reveal the contribution to the United Way 2016-2017 campaign.

“We’re very excited and happy with the results this year and hope to be able to increase our goal next year as well,” said Candace Miller, chair of the Fanshawe College United Way campaign.

The total contribution encompassed money from fundraiser events, student activities and private donations. Some of the fundraiser events included sidewalk sales and a benefit concert at Aeolian Hall.

“What the different fundraisers do is they actually help to raise awareness of the United Way because there are a lot of different activities and they are spread across the campus. It also is a way to get more people involved,” said Dan Douglas, co-ordinator of Leadership Giving for the Fanshawe College United Way campaign.

The United Way is a non-profit organization that supports the local community and charitable organizations through raised funds.

“As part of our mandate to support the community this initiative is important for Fanshawe because it does reach out to those in need … with the wide reach of different programs that the United Way offers it really does show our connection and support to the community,” Miller said.

Apart from fundraising, the Fanshawe United Way committee also attended pop-ups around the city where volunteers would donate their time to providing breakfast to children in the community. Children that usually would not have breakfast every morning would attend the program in the summer months because the school that would usually provide their breakfast is closed.

“It was such an inspirational experience because you really get to see where your dollars go to and how much the community needs the support,” Miller said.

At the staff meeting where the contribution was revealed, the committee members, volunteers and those who pledged were thanked by Miller.

Miller described the energy of the room being high, filled with cheers and clapping, and a standing ovation from the staff when the amount raised was uncovered.

Miller explained that the campaign for 2017 will start soon, with a sidewalk sale taking place as soon as March 24 with more details to come.
Charity Fanshawe College Fundraiser United Way