A funny story comes with this review. So, I'm in CD Plus last week, looking around at the metal (and the used discs) when this disc is being played in the background. After listening to it for about 10 minutes (and not recognizing it), I had to go up to the counter and ask what the music blaring over the speakers was. The response was (in a slightly arrogant tone), “It's the new Protest the Hero. It comes out on Tuesday.”

While I was out last week, I popped in the local Future Shop and low-and-behold, the CD jumps out at me and the $9.99 price point sealed the deal. I took it home and after some extensive listening sessions, I have to say that, for the most part, this band has taken me by surprise. 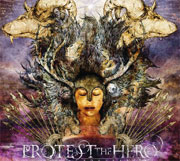 The best way I can describe the band is that they take all genres of metal (thrash, metalcore, mathcore, death metal and even some ol' NWOBHM), mix it in with some Mars Volta type vocals (although there are many different metal vocal styles on here as well), added some punk in for good measure and blended. Blend it all hard and fast and you get this band.

The song writing is phenomenal. The band has many different riffs, tempo changes and surprises in each song that it's hard not to discover something new in each song during repeated listens. The songs do have their hooks and catchy bits, but nothing that would get on contemporary radio (and if they have - good for them!).

The only real complaint I have comes in the vocal department. It seems like the music wasn't written with any vocal melodies in mind. Rody Walker's vocal melodies seem like he's always progressing the same way and always hits the same note at the end of his vocal run. He does have some diversity, but I would have LOVED this album even more if the band would have featured more metal-like screams and death metal vocals that pop up now and again through the disc. When I'm getting annoyed with the vocals, I just go back to listening to the amazing job the band is doing with the music, riffing and song structures.

The song “Bone Marrow” probably represents what you'll find on this disc if you pick it up.

I was a little to late to catch the show Protest The Hero played at Cowboys recently, but if you went drop me an email to tell me how it went. I'd go to check them out, but there's no way I'm paying and sitting through the opening acts for that show.

This disc will bring many more surprises as I spin it more and more and it's a definite purchase for those who like their music a little challenging and on the hard side. Now, for the next one, guys, let's have more of a variety in the vocals or stick to the rough vocal stylings that this style of music is made for.