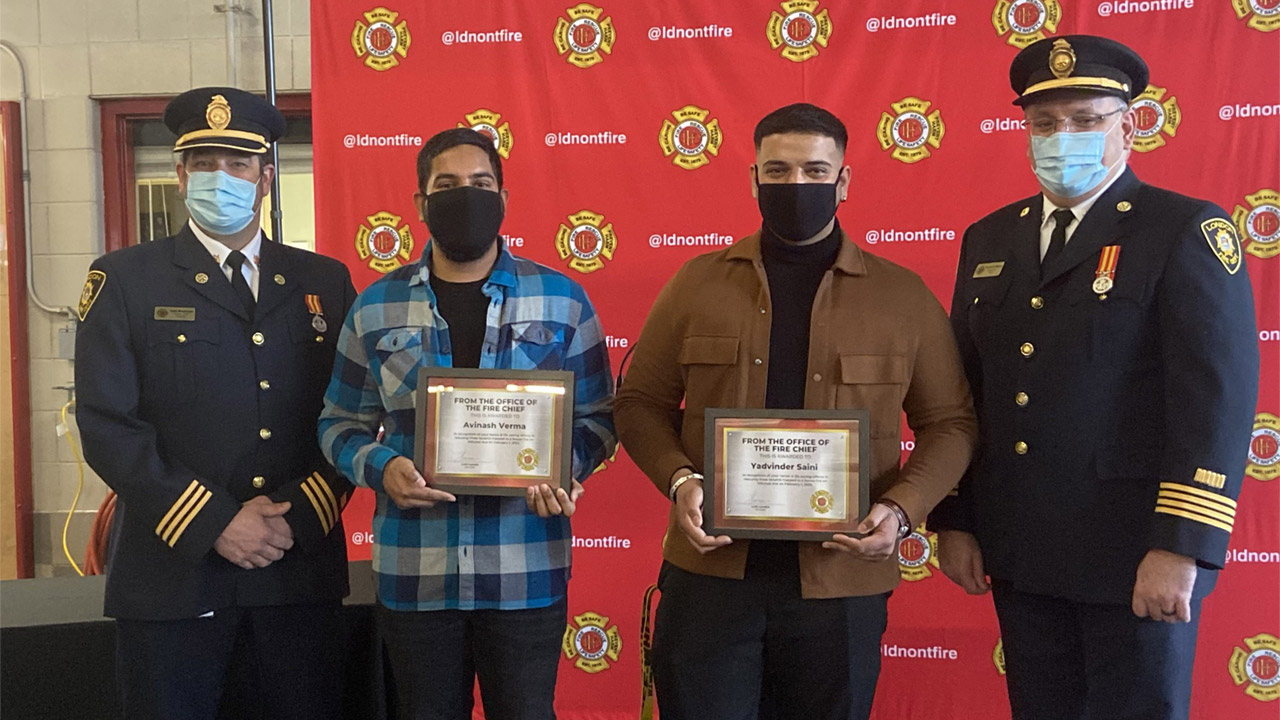 A pair of Fanshawe alumni have been honoured for their bravery after rescuing three women from a burning bungalow on Feb 1.

Yuvi Saini, 23, and Avi Verma, 28, said they were outside when they saw the blaze ravage through the house at 1281 Hillcrest Avenue around 3 a.m.

“I looked up from tying my shoes and saw the fire on the right side of the house,” said Verma.

Running over to the scene, Saini and Verma noticed three women trapped in the basement with no way to escape.

“In those situations, you don’t have time to think,” said Verma.

As one kicked in the window, the other pulled the women to safety. Fire crews arrived at the scene shortly after all 15 tenants were removed from the crowded home.

“In those stressful situations, I’m just happy everything worked out,” said Saini.

On Feb. 11, Saini and Verma were recognized as local heroes for their “quick thinking, actions, and life saving efforts” at the London Fire Department Memorial Headquarters.

“Without hesitation, they took it upon themselves to help,” read the opening statement by London Deputy Fire Chief Richard Hayes. “Since January of this year, there have been 20 fire-related deaths in the province of Ontario. But the actions of these two gentlemen have prevented the deaths of three more.”

Deputy Mayor Josh Morgan added that “on behalf of Mayor Holder and London City Council, we thank you for your heroism and bravery.”

Upon recognition from the City of London, Saini and Verma were also both awarded the London Professional Firefighters Association Challenge Coin.

“It represents over 103 years of firefighters protecting this community which you did that day,” said Jason Tilmlick, President of the London Professional Firefighters Association. “We get into this profession to help those in our community. You did that selflessly, courageously, and we can’t thank you enough for that.”

Saini and Verma, originally from India, both came to Canada three to five years ago to attend Fanshawe College. Saini, who graduated from Fanshawe’s Police Foundations program in 2019, said this incident had further influenced his aspirations of one day becoming a police officer.

“It’s something I’ve always wanted to do. Knowing now that I can handle the rush and severity of those situations makes me glad that I can help.”

“Who ever thought that a couple of international students would be recognized for something of this level?” he added.