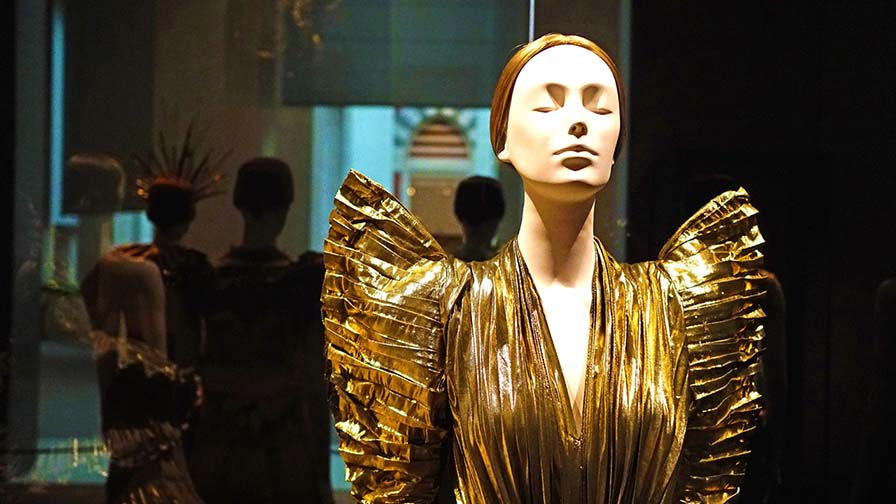 CREDIT: REGAN VERCRUYSSE
We can see how Catholic vestments, with their precious stones and metals, influence some of the designs current celebrities wear. Images of the cross dominate.

If you search online for Andrew Bolton, Heavenly Bodies, you will discover some surprising video and text. Some of it is produced by New York’s Metropolitan Museum of Art, and some by the Society of Jesus (Jesuits). Bolton staged Heavenly Bodies: Fashion and the Catholic Imagination in 2018. In it, he connected the dots between high powered fashion influencers such as the Versace design house and the Roman Catholic Church.

Most of us don’t usually associate the fashion world with the church. If anything, we typically think that fashion designers look for inspiration anywhere else but in your neighbourhood church. Bolton turns this way of thinking inside out.

He sees a strong relationship between the work of influential fashion designers and their Catholic upbringing. The link between high fashion and the church is the imagination. According to Bolton, the storytelling, iconography, bejewelled vestments, and statuary that permeate the Catholic Church are fuel for the fashion imagination.

The images for Heavenly Bodies are of course online. Looking at them, if you have been to a Roman Catholic mass, you will see the connections he makes. The dresses, robes and jackets on display take you to another world. In the images included here we can see the links between the habits of Dominican nuns and the modern black and white women’s wear on display. We can see how Catholic vestments, with their precious stones and metals, influence some of the designs current celebrities wear. Images of the cross dominate.

And while many who enjoy the bright and transporting work of this part of the high fashion world may not deliberately identify with the Christian faith, they do embrace the desire to project glory, joy, devotion, and other features that the Catholic faith inspires. With that in mind, it is not all that surprising to see a Catholic Cardinal posing with Donatella Versace and Anna Wintour.

As Bolton says in a video, Catholics see the world through enchanted eyes. Perhaps he would say the same for those who love the traditional church services of the Anglican Church or of the Eastern and Russian Orthodox Churches. (Enchantment and imagination are less evident in Protestant and Evangelical churches.) Among other things, fashion designers seek to enchant.

But do the lines from modern fashion into the Catholic tradition go back further than Bolton draws them? I think they do.

The biblical story of the formation of the Jewish people as the people of God includes the pivotal account of God’s rescue of the people from their cruel Egyptian slave masters (in ancient, not modern times). In chapter 28 of Exodus (in the Bible), the first job that the rescued community undertakes is the creation of a moveable place of worship complete with elaborate gold craftsmanship and rich tapestries. But the work does not stop there. It includes the making of exquisite vestments for the priestly leaders of the emerging Jewish faith.

These garments include chest pieces, turbans and sashes made of “fine linen, gold thread, and blue, purple and scarlet thread.” The Lord instructs the people to make sacred shoulder pieces, and front and back pieces, made of embroidered cloth. On two onyx stones are engraved the names of the Twelve Tribes of Israel. Thus, the priestly attire is not only glorious to look at; it also tells the story of the beginnings of the people of God, with their 12 key ancestral families.

My daughter went to see Heavenly Bodies when it was on exhibit in New York. She was moved to tears by the beauty. It seems to me that Bolton has done a terrific service by revealing the links between modern visions for high fashion and the Catholic Church. He just didn’t go back quite far enough.

This article draws on a piece, Divine Inspiration: how the church led to high fashion, by Joanna Moorhead (The Guardian), and Inside the Met’s “Heavenly Bodies” with Curator Andrew Bolton and Fr. James Martin, S. J. on YouTube (America – The Jesuit Review).
Editorial opinions or comments expressed in this online edition of Interrobang newspaper reflect the views of the writer and are not those of the Interrobang or the Fanshawe Student Union. The Interrobang is published weekly by the Fanshawe Student Union at 1001 Fanshawe College Blvd., P.O. Box 7005, London, Ontario, N5Y 5R6 and distributed through the Fanshawe College community. Letters to the editor are welcome. All letters are subject to editing and should be emailed. All letters must be accompanied by contact information. Letters can also be submitted online by clicking here.
Fashion Religion

1
Comfort is the new school uniform
2
Queer coding in fashion: Less a style, more a philosophy
3
Religious faith and mental health
4
Style advice from a local fashion blogger
5
Sewing a passion for fashion

Fat shaming in The September Issue