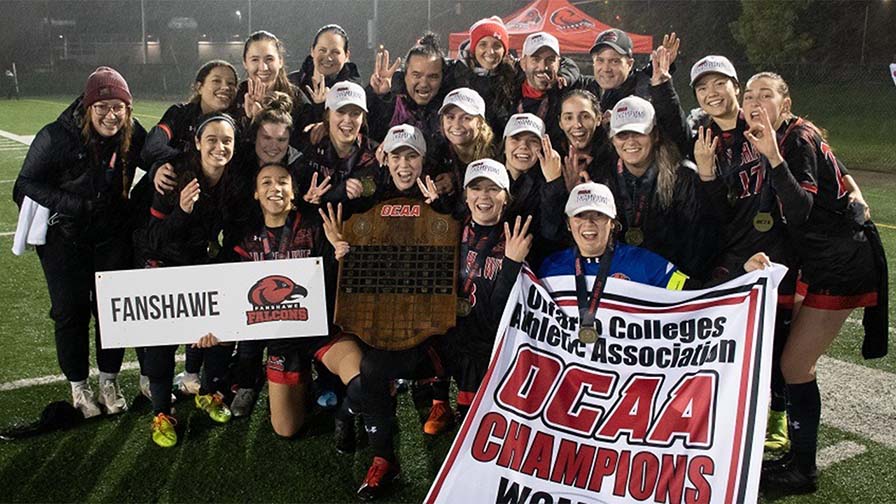 On Saturday, Oct. 30, Fanshawe College hosted the OCAA Women’s Soccer Championship on City Wide Sports Park. One day earlier, Fanshawe’s team had won the semifinal game. The Falcons women showed their best and demonstrated professional skills as real fighters. Saturday evening, they pulled out the victory with a score of 2-1 against St. Lawrence. The win extends Fanshawe’s OCAA unbeaten streak to 36 games and marks their third consecutive OCAA title.

Despite the women’s undeniable success, the issue of inequality in the game is still very much alive.

Even though women’s soccer started in Canada in the beginning of the 20th century, it still struggles with some major issues. The last two decades have changed a lot about people’s perception of the world. Some sports that were considered strictly for men have found a new perspective of development among women. But nowadays, statistics are not that encouraging: from all soccer agents, only three per cent are women, and out of 26,000 referees, only 853 are female. This is unfair, because out of all soccer fans globally, a quarter are women.

Anyone who gets into a women’s soccer game starts to wonder why they haven’t thought about it before and the answer is clear - there is a strict stereotype. Even passionate soccer fans don’t follow women’s championships, and girls are more likely to be considered weak and less skillful. But the Fanshawe women’s soccer team may surely dispel those myths.

Being in this sport among women is first of all showing the character and abilities to be a part of the team.

After the women won their championship game, I asked the girls about the inequity in the game.

“No one asks about this, but we all feel that women’s soccer stays in the shadow, while everyone speaks about men’s game,” said one player. “Equal recognition and same funding would greatly contribute to the popularization of women’s soccer across the world”.

“A lot of times people look at women’s sport and they’re shocked that women are really good and they don’t expect the same game as men play from us,” added her teammate. “But realistically we can do the same things and we should be given the same respect. People should use the same vocabulary when they talk about us and men.”

In Canada, women have made a tremendous effort throughout the years to develop this game in different ways and make it equally popular.

“The Canadian national team has made a big point when it comes to whether this is a women’s or a men’s sport - it’s definitely a sport for everyone,” said Ouillete. “But the women certainly left a mark and soccer is becoming more and more popular: we’re seeing young girls playing soccer, which is extremely important. These national players are tremendous world’s models and I think they’re being models for these players in today’s game.”

Games played by the women are more harmonious and emotional, and in terms of dedication and character on the field, women outperform men. Today there are about 25 million professional women soccer players in the world. In Europe, the Union of European Football Associations (UEFA) and the Fédération Internationale de Football Association (FIFA), realizing huge potential for the development of this game of millions, especially through women’s soccer, pay great attention to this issue. While World and European championships are officially held, there is also a women’s Champions League. In Canada and the United States, women’s matches gather more and more spectators every year. In China and Japan, for example, women’s soccer has become more popular than men’s. But the biggest issue stays the same - change of attitude to women’s soccer: from arrogant and secondary to equal and prioritizing. This, girls hope, should help to increase funding, improve infrastructure, attract sponsors, social protection for coaches and other important components.
Fanshawe Falcons OCAA Soccer