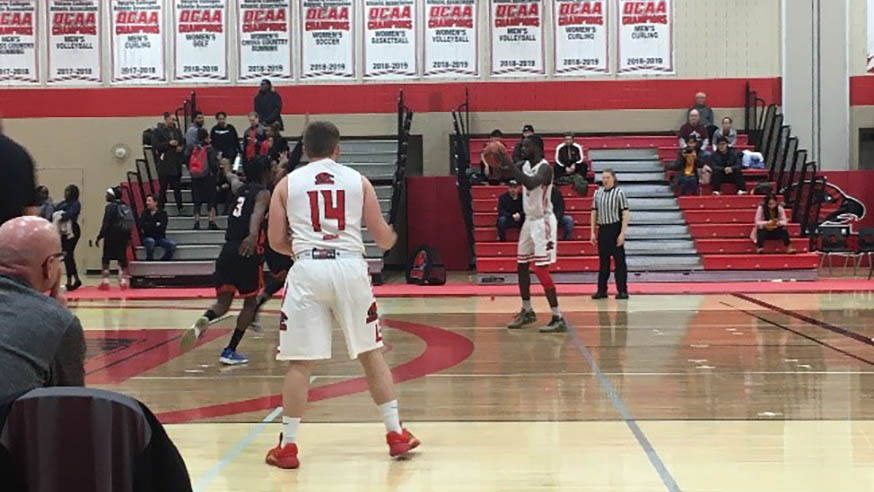 On Feb. 20, the Fanshawe Falcons honoured their five-year seniors before both the women’s and men’s basketball teams faced off for their final home game of the regular season against the Mohawk Mountaineers.

In the women’s basketball game, senior shooting guard Mikhaila Wright (tourism and travel studies) and senior guard Chuot Angou (protection, security and investigation) were both honoured before the game for their work and dedication to the Fanshawe program. In the first quarter, Wright opened the game with seven points and five rebounds, making the score 21-11 at the end.

That’s when Angou went on fire, scoring 13 points in just the quarter alone. She also made four out of five shots she took and made some free throws as well. The Falcons had a 46-30 lead at the end of the first half.

The Mountaineers however tried to come back in the third quarter, shooting 41 per cent and trying to chip away the team’s lead, but Angou had something else on her sleeve, scoring an additional nine points. The score going into the final quarter was 63-51 for the Falcons.

Two more free throws in the fourth quarter for Angou set her for a new Fanshawe women’s basketball record with the best free throw percentage in a season with 89.6 per cent. The game took a final close as the Falcons defeated the Mountaineers 84-64. The women’s basketball team is now 17-1 and has won 14 straight games heading into the playoffs.

“This isn’t our end goal,” Angou said after the game. “Our next goal is to win Provincials and go back to the National Championship.”

The second quarter was all the same for the Mountaineers, outscoring the Falcons 32-11 in the quarter to go up 56-31 at the end of the half.

In the third quarter, the momentum came back to the Falcons with a reverse lay-up by freshman guard Jordan Huntley (business) and a brilliant block by sophomore forward Mason Middaugh (computer systems technology) near the end of the quarter. However, the Falcons were still down 77-60 heading into the final stretch.

The Falcons used that momentum in the third and made an impressive comeback. Johnson made a huge putback and a big block down the stretch which put the home crowd on their feet. Unfortunately, the Mountaineers hit some key shots at the end and won 97-89.

“It was an off night, and we need to improve and get better,” said head coach Tony Marcotullio.

After they won 83-66 in Canadore on Feb. 22, the men’s team and the women’s team will be facing off in qualifying games, and if the teams win those games, they move on to the OCAA Championships at St. Clair College (women’s) and Lambton College (men’s). The women’s basketball team will be at home on Feb. 29 at 2 p.m. against Loyalist for the qualifying game, while the men’s team must travel to play against Seneca at 4 p.m.
Athletics Basketball Fanshawe Falcons OCAA

Why care about self-care?