Breaking up is hard to do 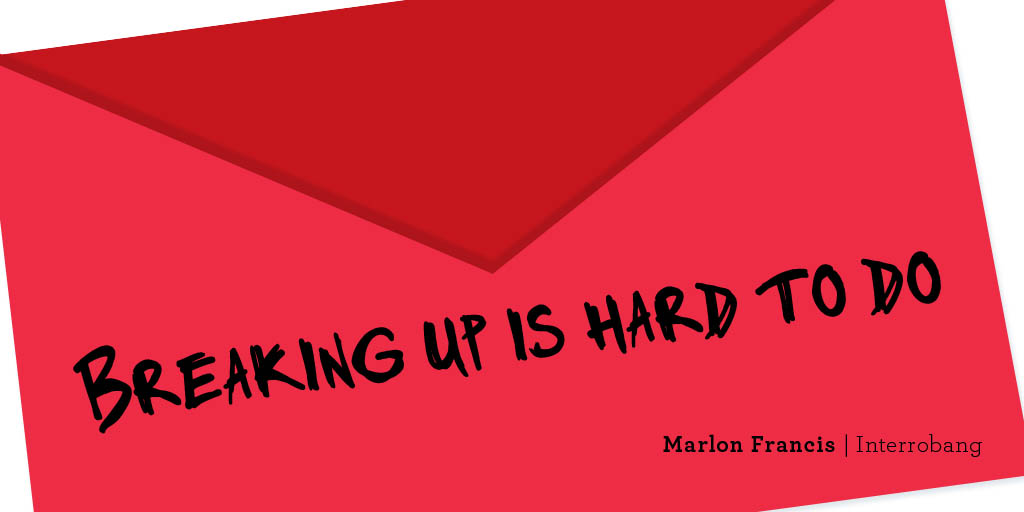 Who wants to think about something as painful as breaking up during the Valentine’s Day season? Surprisingly, quite a few and for various reasons. Holiday seasons tend to push people past their tipping points, especially when uncertainty about their relationships have already been festering.

No one likes to experience breakups, but much like death, it is a certainty in life. Whether you’re the one initiating the breakup or receiving the news, it is one of those situations that, universally, people hate to face. Having been on both sides of that fence, I have compiled what I believe to be some of the best tips towards calming the tumultuous waters of the breakup, as much as can be reasonably expected.

Feelings are tricky. One moment you and your paramour are in relationship bliss and a moment later you can’t stand to be in the same room as them. A popular question that gets asked is, ‘when did you start feeling this way?’ This question is a bit of a trap. Not that the inquirer realizes this, but feelings don’t typically turn on a dime, especially if you’re actually in the throes of a relationship.

Time reveals to us things that we didn’t initially observe, and when we begin to make discoveries that challenge our positive feelings towards someone we often ignore or reshape the information we receive. Time passes and sometimes those initial negative responses wane while other times they intensify. Whatever the trigger may be that pushes you to teeter with your emotions, acknowledge them. Don’t torture yourself by riding the carousel of mixed feelings. Bite the bullet and have a conversation, some of the most overwhelming words some people can hear. Conversation clears the air and alleviates the weight of guilt that a change in amour can generate. Not to mention, you may find that you are not alone in your observations about your relationship, a revelation that can greatly lessen those apathetic feelings of self-loathing that can be associated with breaking up.

Be honest but considerate

Honesty is the best policy, but tact is important too. If you feel compelled to tear down all the walls of your relationship, your mate and everything that you’ve built to that point, take a breath and reassess your plan of attack. Remember, you were once in love, or at least in like with this person.

The repercussions of our actions sometimes go unwitnessed by us. How you leave a relationship can greatly affect the way your once beloved approaches relationships in the future. Some may argue that what happens after your union has broken is not your concern or responsibility, and on one hand I agree. However, if you’re of the type to lament over feelings of guilt, then how you approach these types of situations can potentially offset the impact of such emotions.

An honest approach is a bit self-serving, as it helps you to process your decision and validates that your exit was done with integrity. Nothing clears a conscience faster than confirmation that, despite being a heartbreaker, you did nothing wrong. Changing your mind, how you feel or what you want are not actions of a terrible person. We all evolve, change directions and walk the paths we hope will take us to the life we work so hard to create for ourselves, and everyone has the right to that.

So keep that in mind when you choose to depart and remember that, although your expartner may not want to let you go, eventually they’ll get back on the horse. Better to leave on a positive note from which both parties can learn and grow from than to leave feeling as if you could have done more.

Careful with the post-relationship shows of affection

Breakups are different for different people. The reasons and motivations for why fluctuate from relationship to relationship. Some people experience amicable separations, but don’t fully let go. The reasons for this can be convenience, fear, guilt and the list continues.

Oftentimes too, it is just difficult to reestablish new routines once you’ve broken free from your relationship. Sometimes it’s because you still love them, despite knowing that you don’t work together in a romantic sense. Whatever your reasons, acknowledge that by holding on you can cause damage to present or future relationships. You must give yourself time to mourn the death of a relationship, so that you can appreciate the good, purge the bad and move forward. When we leave things unacknowledged they don’t go away, they just sit dormant, waiting for an opportunity to arise when you least expect and least want them. Sometimes facing the pain is the only way to release yourself from it.

Breaking up is hard to do, but it can be done with integrity, tact and respect. Like the adage says, “do onto others as you’d have them do onto you”. Simple words that can provide mature counsel and accurate navigation through rough waters.

Romantic horror films to spook up your Valentine's Day