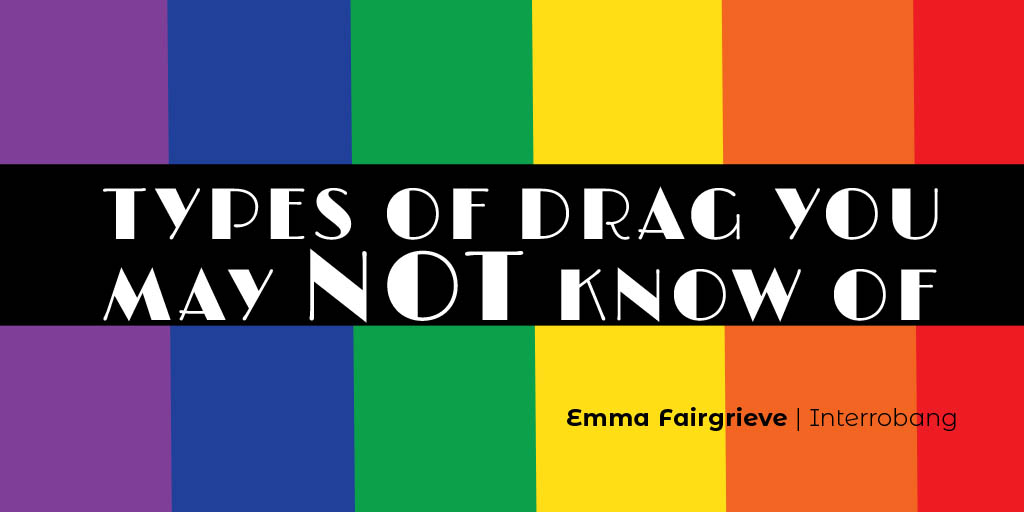 When you hear the word “drag”, you may just only think of men dressing up as women. Although that’s not wrong, there are limitless styles and genres of drag. Many styles have been featured and popularized by the Emmy Awardwinning show, RuPaul’s Drag Race.

That being said, there are numerous styles that have yet to be featured and may never be featured on the show. With Canada’s Drag Race coming to CraveTV, there is ample opportunity to see the range of what Canada’s drag scene has to offer.

Fishy drag is one of the most popular forms of drag. Heavily featured in RuPaul’s Drag Race, fishy queens are often what is associated with the ‘ideal’ drag queen. The word “fishy” refers to a man who, once in drag, looks so much like a woman that their true gender seems fishy or suspicious. More often than not, fishy queens can fully pass as looking like a cis-gender (biological) woman. Examples of some famous fishy queens include Farrah Moan and Courtney Act.

Drag kings are rarely ever highlighted in mainstream media. Drag kings are cis gender women who dress up as men. These performers transform themselves by binding their chest, wearing wigs, faux facial hair, and using many other tricks to perform their art. Unlike the other genres in this list, the term “drag king” is broadly used for female to male drag. Drag kings can fall in many other categories of drag, some of which are listed here.

Club kids, also known as gender F***, originated in New York during the ’90s. Club kids, although not as popular today, wear extravagant costumes that align more with art expression than cross dressing. They often exaggerate the female or male body. Michael Alig and James St. James lead the original club kids movement. However, it is now a bit rare to find club kids in the modern drag scene.

Androgyny is yet another form of drag not often shown in media. Androgyny refers to a man or women who dress to look like they could be either gender or even genderless. Also known as “anti-queens”, those who participate in androgyny like to blur the line between genders and are often very artistic. The goal of androgyny is to make you question gender norms and identity.

Bio queens, faux queens, diva queens, hyper queens and female queens are all different names for the same style of drag. Mostly known as bio queens, they are cis gender women who apply feminine drag into their art. Basically biological women who exaggerate their female features using drag queen tips and tricks. Bio queens are often associated with women of Instagram that use heavy and colourful eye makeup to exaggerate their natural features to the point where they look like they could be drag queens. Although the makeup and costumes are a large part of this style in drag, many bio queens are also performers like traditional drag queens.
Diversity Drag

1
Snapchat offers opportunity for diverse content creators
2
Appropriation vs. appreciation: A culture is nothing without its people
3
Don't be Latin, mixed-race, or Middle Eastern: Exploring the lack of diversity in Canadian newsrooms
4
Black History Month artwork submissions: Black is beautiful
5
The loss of language and culture in Indigenous communities