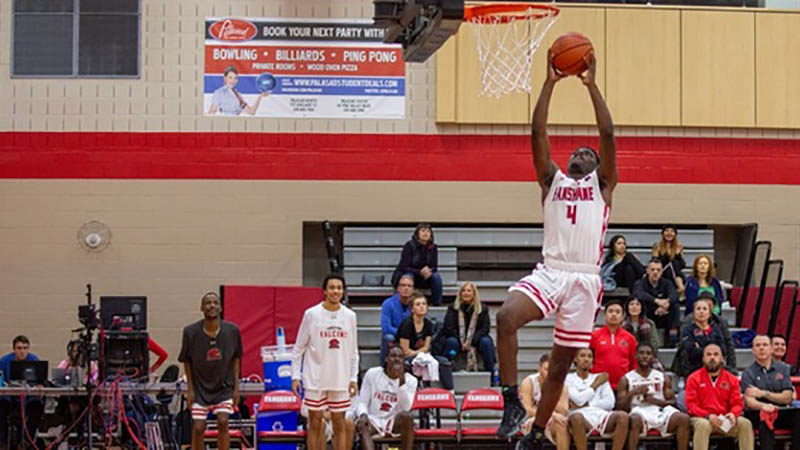 The Fanshawe men's basketball team closed out their first semester on an eight-game win streak on Nov. 29.


On Nov. 29, the Fanshawe Falcons men’s basketball team faced off their toughest opponents so far, the Niagara Knights, in some Ontario Colleges Athletic Association (OCCA) action.

This was their last game of the fall schedule, with December off to focus on their program studies. Their next game won’t be until Jan.17. The team wanted to make sure to get this win, because they don’t play another game of basketball for a month and a half.

The Niagara Knights took the lead in the first half, thanks to Lequan Hylton, who was on fire shooting from the three-point line, scoring 25 points in the game. For the home team Falcons, they were down 50-35 going into the game, but they got a chance to get their offense back into place.

“The players and the coaches just weren’t on the same page,” said head coach Tony Marcotullio. “We came back into the locker room, talked about how we can make these simple adjustments and come back in this game.”

In the start of the third quarter, things started to finally heat up on the Fanshawe Falcons. Forward Alfred Johnson (human resources management) started the comeback by sparking the Falcon crowd with a basket plus “and-one” foul. Guard John Akende (general arts and science) afterwards continued the comeback with another basket plus “and-one” foul.

They completely got rid of the 15-point deficit. At the end of the third quarter they had their first lead of the game with the game being at 71-64 heading into the final quarter.

However, the Niagara Knights didn’t give up, making the game in the fourth quarter a back-and-forth offensive game. Both teams scored basket after basket. Once the game got closer, and when a clutch situation was needed to secure a win, Akende got a layup to give the Falcons back with 40 seconds left on the clock.

Fanshawe’s defence was recognized however, because without two key stops at the end of the game this result could’ve easily gone the other way. But the two stops gave the falcons their eighth straight win, and an undefeated record for all of November.

This win also puts them on the top spot for the OCAA west division, which is good for when playoff time comes around in February. Finally, this is the first time they have won eight games in a row since the 2009/2010 season — that’s a decade long that no basketball team could do it, but these Falcons did it.

When asked how he felt about winning eight straight games and going undefeated in November, Marcotullio responded saying, “ask me that question when we are in the playoffs. It’s great, but it’s not the end goal”.

“Our next six opponents are the top teams in the league, so the objective is to get everyone back from the holiday break all ready to go,” he added.

They have a long way to go, but if this team continues to win, there’s no reason why this team can’t win the OCAA Gold.