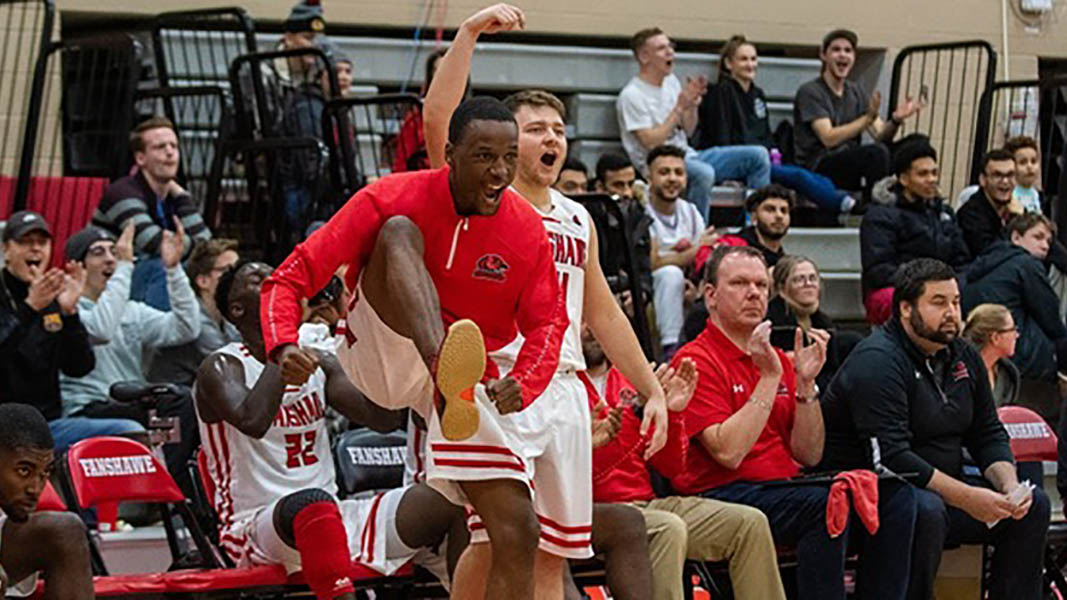 CREDIT: MEMBERS OF THE FANSHAWE MEN'S BASKETBALL SQUAD AND SUPPORTERS CELEBRATE VICTORY AGAINST THE LAMBTON LIONS ON NOV. 13.
FANSHAWE ATHLETICS

The Fanshawe Falcons’ men’s basketball team has won every single game in the month of November.

The team has been playing so well that in the Ontario Colleges Athletic Association (OCAA) rankings, they are currently first in the West Division.

One of their key main players has been 6-foot-6 forward Alfred Johnson (human resources management), who has been averaging a double-double.

Johnson has been the leading scorer for the team with 20.6 points per game and leading the team in rebounds with 12.3 rebounds per game.

Head coach Tony Marcotullio told Interrobang he believed that rebounding will be the deciding factor to winning games at times.

“The deciding factor [is] more rebounds equal more possessions in the game. Even on our good nights, we may only need 12, but on our bad nights, we get 20 and still win,” Marcotullio said.

“We practise every night, we do a lot of completive drills every night, work on our offensive technique, but last year our offensive wasn’t that good, but our guys are doing good,” he said. “Student athletes do better than students most of the time, but we try to get the guys to workout two days a week. We also want them to go shootaround everyday, but our guys work hard.”

This team is looking to go into a big playoff push in late February and hopefully into early March, and in order to do that, they need to continue to be a top rated offence and be able to win on the rebounding department. Interrobang wishes nothing but the very best for all of our student athletes.

This male basketball team will be great this season, so continue to expect dominance from this team after the holidays.

Coming to Canada: Acceptance in the face of nonacceptance