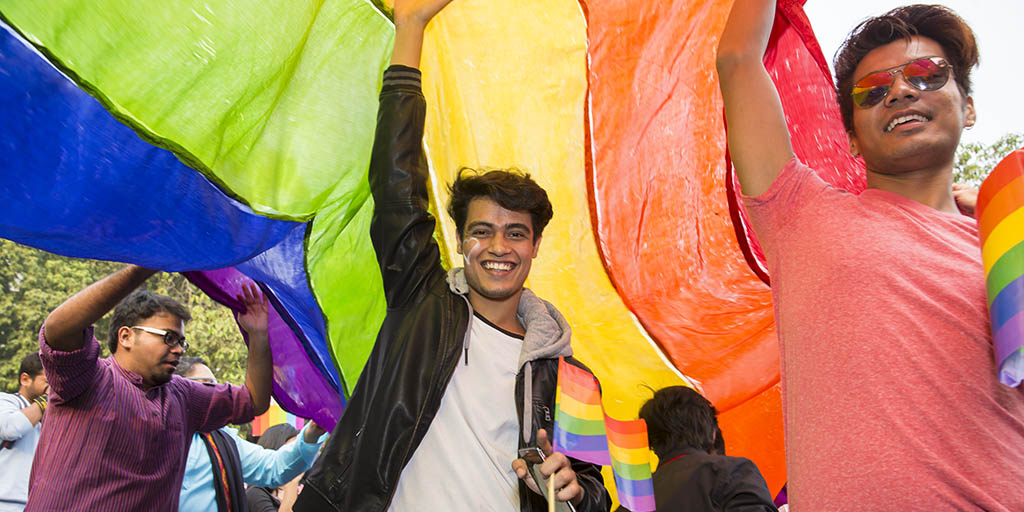 CREDIT: ISTOCK (SOUMENNATH)
Opinion: A person's sexual orientation is not their sole defining characteristic. (Pictured are marchers in the 2015 Delhi Queer Pride Parade.)

Everyone has a right to claim their true identity and be proud about it. In 2018, India gave this right to the gay community by decriminalizing homosexuality.

However, due to the preconceived notions and stereotypes the entire community is given just one colour, which is pink.

“Gay people are pink; they wear flashy clothes with glitters because they all are into fashion. They portray effeminate behaviour and are usually found with girls in beauty parlours” — This belief may be true for a certain section of community and I would not object or complain. But as I said before everyone has right to claim their true identity. It’s an important part of our personality and psychological development.

I am a 21-year-old gay rights activist who has never taken any interest in fashion. I don’t care about my outfit and I eat carbs which is why I am overweight. I hang out with boys because most of my friends are heterosexual men who never made me feel different.

But if I am made to interact with an average Indian who has only seen gay guys in Bollywood films, he or she would not even believe that I am gay. A lot of people often say to me, “you don’t look or behave like gays; girls have never taken interest in you maybe that’s why you feel that you are gay”.

My question is, why are we (gay men) made to feel that we are less of man?

My education often prevents me from feeling bad about it because these things are said purely due to lack of ignorance and sometimes as an attack from homophobic people. But the fact remains that I will always be made to prove my gender identity. It’s like I need to tell them that I am a man and hence I am not choosing to wear a saree [traditional women’s garment].

It’s like if people are choosing team members for cricket, they would leave me out saying “you don’t want to play right you would probably want to sit and chat with girls”. I want to make it clear that there is nothing wrong with men who wear saree. It’s a choice and I have also made a choice to only wear shirts because that’s what making me comfortable.

When I was in 12th STD [high school] I came out to my friend and the very next question she asked me sent me back into closet. She asked if I apply blush on or lipstick. I got annoyed and told her that coming out was a prank and I am actually not gay.

These days I provide counselling to closeted gay men who don’t want to come out because of the same stereotypes that society has for them. I know gay men who are into muscle building, wrestling and sports cars.

My own ex-boyfriend had a very muscular typical “Indian mard [man] image” in front of his friends and family. He said he can never come out because his friends and family will disown him thinking that he would want to change his gender. I know liberals would call him a victim of toxic masculinity and male ego. But in reality, it’s just a plea to demand true identity.

Toxic masculinity is assuming your male gender to be superior to women.

I have lived in Mumbai where my friends have never made me feel different. Even after coming out I didn’t see any difference or change in my bond with my male friends. I still have sleepovers, camping, night outs and hookah sessions.

My friends didn’t ask me to join a girl gang and be their gay bestie. On the contrary, they were more supportive and inclusive. My friends in Canada are also very supportive. All my housemates, roommate and friends that I hang out with are straight men and they have never made me feel even slightly different.

We tease each other, we go out and get way too drunk which is why I often stay back at their house. There are two things worth mentioning. First is that when I asked my roommate if I ever made him feel uncomfortable, he replied “Uday, gays also have brothers”, which made me feel so emotional.

And then I asked one more friend of mine if he likes hanging out and living with me, to which he replied “I have a best friend with whom I grew up in India and when he came out to me very recently, I asked him that when is he taking me to all his gay clubs so that he can also check out guys that he likes”. Seeing me surprised at this, he further added that because he grew up with him, he was part of everything they did like biking, road trips, studying for exams and even taking bath together when they were teenagers so he did not want to leave him alone in this part of life.

But I don’t see other gay guys getting this acceptance especially in north India. Men in north refer to gay guys as “meetha” [derogatory slang for a homosexual person]. They are bullied, laughed at and even sexually harassed.

This mindset has to go. I have planned a campaign to counter this. Gay men need to raise their voice and tell these people to behave and interact on equal terms. Tell them “bhai bol meetha nahi” which literally translates to “call me brother, not meetha”.
Editorial opinions or comments expressed in this online edition of Interrobang newspaper reflect the views of the writer and are not those of the Interrobang or the Fanshawe Student Union. The Interrobang is published weekly by the Fanshawe Student Union at 1001 Fanshawe College Blvd., P.O. Box 7005, London, Ontario, N5Y 5R6 and distributed through the Fanshawe College community. Letters to the editor are welcome. All letters are subject to editing and should be emailed. All letters must be accompanied by contact information. Letters can also be submitted online by clicking here.
Homosexuality India

The top ten rules for life