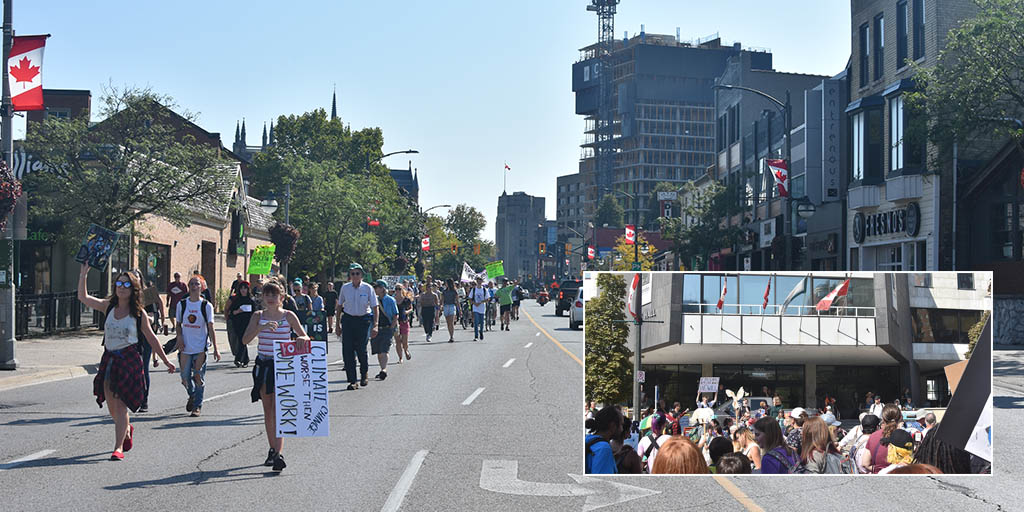 The sound of drums and chants could be heard all across London’s downtown when dozens of students walked out of classes to protest the inaction of governments here at home and abroad.

The climate strike led by child activist Greta Thunberg has swept up environmentally conscious youth across the globe in a bid to try and get something done. On Sept. 18, Thunberg addressed the United States Congress on climate change. She also gave a speech at the United Nations (UN) Climate Change Summit on Sept. 23. Students in London hoped to show their solidarity with the 16-year-old high school student from Sweden who has been striking on her own since august of 2018.

Students attending the march vocalized their hopes to see this as the beginning of a movement that leads to real change. High school students led by London Central Secondary School student Genevieve Langille organized the protests through Facebook and attracted interest from nearly a thousand Londoners.

The protesters had a list of demands for each level of government. Langille said she wants to see other methods of transit used more effectively in London.

“We’re trying to get free bus passes so that every citizen is incentivised to use public transport. We’re also trying to get more bike lanes and more education on the climate crisis,” she said.

Langille explained why she was very motivated to get involved with the climate strike movement.

“I think youth are the future, and even though we shouldn’t have to do this, no one else is listening to the scientific consensus and therefore we have to protect our future.”

Similar sentiments were echoed by a group of Western University students in attendance at the march. For Emily Renneberg, there’s hope that this is the beginning of something big.

“It’s the start of a big political call to action. It should have been a while back, but today’s the day,” Renneberg said.

Western student Kaitlin Watson said she is hoping to see change at the federal level. She did express some disappointment with federal leaders on this topic saying, “there’s not enough talk about it or everyone’s doing these little Band-Aid fixes”.

So far Canada is not on track to meet its greenhouse gas emission targets it set alongside the international community at the 2015 UN Climate Change Conference in Paris. According to website climateactiontracker.org (which is a website you can use to see how your country is or is not meeting its climate goals) Canada is falling short in its climate commitments. According to data released by the government (which can be found on the canada. ca website when you Google-search Canada Paris Agreement Progress), Canada continues to create emissions that will exceed the 1.5 degree limit set by the Paris Agreement.

Climateactiontracker.org also shows that Canada’s policies could be seen as highly insufficient and are some of the worst in the world, and would push global warming between three and four degrees warmer in 2030 if all other nations followed our example.

Western student Julia Bankes said she hopes that by protesting, even in a smaller city like London, maybe some of this can change.

“This is all over the world,” Bankes said. “I am from Chicago, and we have friends in Chicago marching. We have friends in Sydney [Australia], in Germany; someone sent me a picture from Berlin this morning. London might not be a big city but it’s important to show that we’re here.”

The organizers hope to hold a strike every Friday in front of city hall, students are especially encouraged to walk out of classes. See you there?
Climate Change Environment London City Hall

1
Beyond fast fashion: Fanshawe's push for sustainable clothing
2
Women in Municipal Politics
3
Here are the results of London's 2022 municipal election
4
The Time is Now: Governments must build climate resilient communities
5
Everyone running for office in the upcoming municipal election