The Christian arsenal against climate change 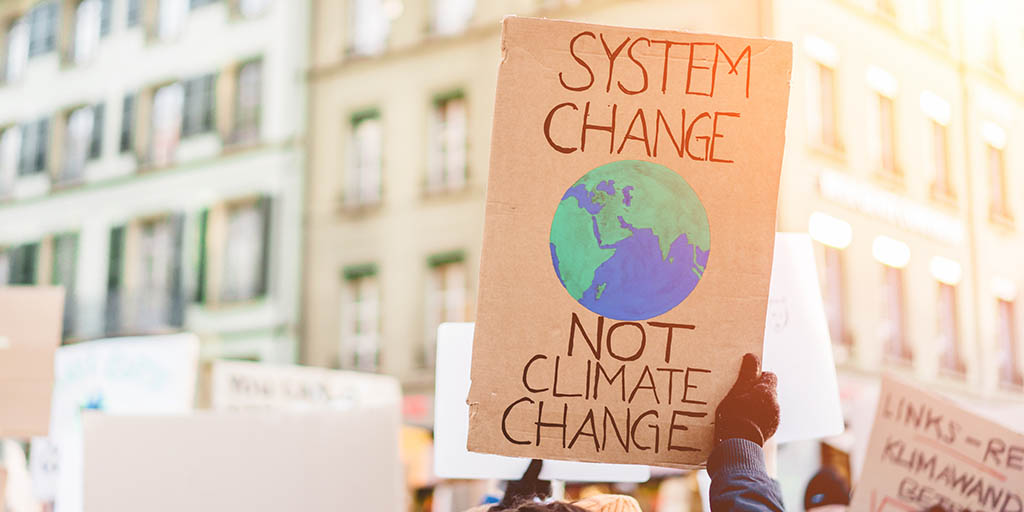 “I consider climate change to be a profound narrative crisis for Western civilization, one that is inextricably linked to questions of worldview and spirituality. I came to this issue from more of a hard-politics background, but I’ve found that it is much more about the stories that our culture tells about itself and our relationship with nature. Are we apart from nature or of it? Is the earth a living system or a machine for us to dominate?” (Naomi Klein in The Buddhist Review, Fall, 2015. Emphasis added.) Greta Thunberg is encouraging the world to see the battle against climate change as a world war. Climate change is a problem of enormous proportions, maybe comparable to the German invasions of its neighbours around 1940. She demands that politicians stop speaking calmly about climate perspectives and act decisively while there is time. She advocates for a transformation of the economy comparable to the transformation of a peace-time economy to a war-time economy.

At the same time there is a global community that has an arsenal at its disposal to fight climate change. That community is the Christian church. The church and its weapons cache don’t always spring to mind when we consider the fight against global warming. So, I’ll try to describe that arsenal.

But first, drawing on a Christian worldview, we can see why the climate in deep trouble. We like doing things. And, it seems to me, that we humans are wired by God to reach out into the world in order to change it and better ourselves even while we take care of it.

This world is a creation of God. It is glorious; it is like a womb in which life comes into being; it is the proper home for all living creatures, including humans. And as I see it, the proper home for especially humans. God tasks humans alone with being stewards of his creation – or at least the small but significant portion of it within our reach. And he encourages us to enjoy the good things that spring forth from the world.

That is the (theological) foundation for our building of families, villages, industries, media organizations, communities and societies within the safety of this created world. We are justified in traveling, building, discovering, using our powers, creating arts, and deploying technologies.

God also requires that humans act justly toward the neighbour. This is the first item in the church’s arsenal against climate destruction. Here’s an example of God’s demand for justice playing out. The laws of God in the Old Testament portions of the Christian Bible recognize that slavery exists. (The Christian Old Testament is, more or less, the Jewish Scripture.)

But those laws mitigate the length of time a person may be enslaved. They reduce the population pool from which slaves can be drawn. They forbid cruelty towards slaves. They even require that slaves have time off work. The trajectory is clear.

Later, in The New Testament, the post-Jesus part of the Bible, slavery takes a fatal hit. Jesus, quoting the Old Testament, states clearly that one of God’s greatest demands is that we love and treat our neighbour as we want to be loved and treated. That assertion has poisoned slavery.

We can apply the double doctrine that we are to love our neighbour as ourselves and seek justice for all to the climate crisis. When we do, the path becomes obvious. In the end there is no room for a casual acceptance of the suffering of our neighbours in the Bahamas or in Sub-Saharan Africa caused by climate change in which we play a part. Such casual acceptance is a sin.

Second, repentance. Repentance means change. Specifically, it means to change from patterns of speaking or acting that are evil towards patterns of healing and fairness. Continuing to organize our lives so that each of us requires unbelievable amounts of fossil fuel is not an acceptable option. It is a sin because it means that we are undermining the health and longevity of our neighbours on this planet. On this point, I confess to being a perpetrator, sometimes unawares, but increasingly not.

Third, prayer. It is entirely appropriate that Christians who attack climate change pray for God to bless their own efforts and others’. They can pray for justice especially for those who will suffer first and strongest from the effects of global warming.

And finally, the church is a world-wide community. It is an incredibly diverse – and in some ways fractured – community. But its members serve one Lord (Jesus Christ).

It numbers over two billion and maybe closer to three. If this global community were to mobilize to address climate change, there is not telling how quickly things would improve.

To summarize, mine is fourfold. First, we sin when we carelessly consume the resources of the planet with deadly results for our seven billion neighbours. Second, God calls us to repent.

Third, we are morally required by God to work for environmental healing, and for justice for present and potential future victims of the earth’s warming. It is a daunting task so, fourth, it is important that we sincerely ask God for his help.

In the end I would say that it doesn’t really matter whether one denies that humans cause all or some of climate destruction. What matters is accepting responsibility to change what we can for the good of our current and future neighbours. So, discover the justice and climate initiatives in your Catholic, Protestant, Russian Orthodox, Eastern Orthodox, Charismatic, Baptist, Evangelical or independent church.

Act now. Pray. Join those who trust in God and are aware of his demand to bring blessing to our world and its inhabitants.
Editorial opinions or comments expressed in this online edition of Interrobang newspaper reflect the views of the writer and are not those of the Interrobang or the Fanshawe Student Union. The Interrobang is published weekly by the Fanshawe Student Union at 1001 Fanshawe College Blvd., P.O. Box 7005, London, Ontario, N5Y 5R6 and distributed through the Fanshawe College community. Letters to the editor are welcome. All letters are subject to editing and should be emailed. All letters must be accompanied by contact information. Letters can also be submitted online by clicking here.
Climate Change Environment Religion

1
Queen Elizabeth II has passed. Will her church do the same?
2
Becoming rich(er)
3
Sexuality in Barbados
4
Human Creation Stories, from Rabbit Boy to Adam
5
Christ, freedom, and COVID-19

Anti-party fines are extreme and dubious