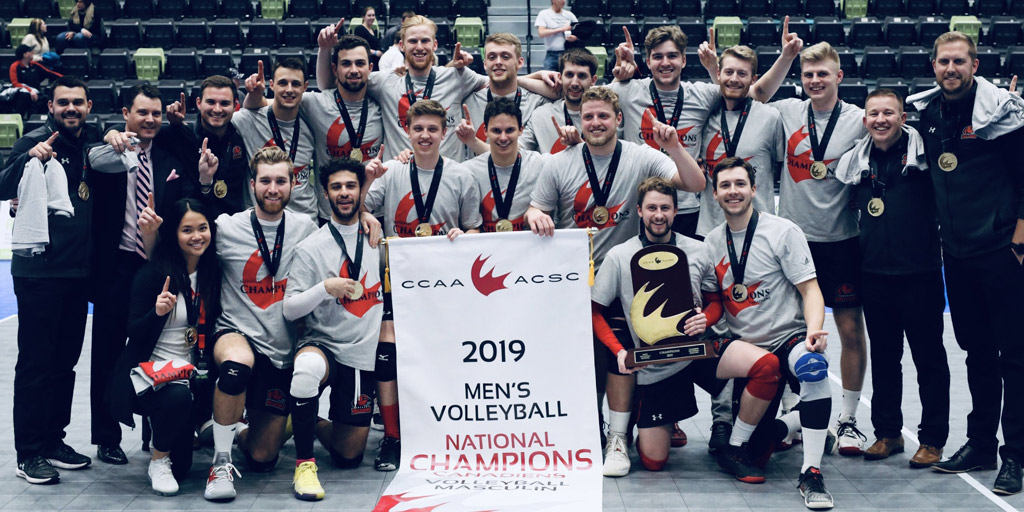 The Fanshawe men’s volleyball team has made College history, completing a perfect 25-0 season and capturing the school’s first ever National gold.

On the evening of March 9, the Falcons defeated host Red Deer Kings three sets to one in Red Deer, Alta., at the Canadian Collegiate Athletic Association (CCAA) Championships.

The sold-out Red Deer crowd did little to shake the Falcon’s nerves.

“Lots of family friends made the trip, even alum in the area,” Patrick Johnston, head coach of the men’s team, told Interrobang over the phone. “At times, the 50 or so Fanshawe fans were louder than the 1200 Red Deer fans.”

Last year, the men’s team snagged the silver, falling short of the coveted gold. To take their minds off the pressure to redeem themselves this year, the team prepped for the game by taking a trip to the mall.

“We benefited a lot from being in the gold medal match last year, so they knew what to be thinking about and how to best prepare, and for this group it was to relax,” Johnston said.

According to a March 9 media release, the night began with Falcons middle Mike Liscumb shutting down the King’s efforts with three blocks in the opening set. The set finished with a 25-12 victory thanks to kills from Zach Albert, James Jackson, and a pipe attack from Cole Jordan.

Playing in his final game as a Falcon, fifth-year libero Dave Gundrum also helped bring the team to the lead once again, finishing at 25-13.

“We were a bit surprised at the level they were playing at in the first and second sets,” Johnston recalled. “They knew they could play individual points that well but to string together so many in a row was on an unbelievable level, and at that stage and that moment to be able to put all that together was pretty incredible.”

Red Deer managed to steal the set at 25-22 after blocking Fanshawe’s attacks throughout the frame.

The fourth set saw the Falcons come back with a vengeance, thanks to kills from rookie James Pratt, as well as Sebastian Lethbridge, and Liscumb and Jordan once again. They won the set 25-23 and the match 3-1.

Albert was named to the First Team, while Jackson was named a Second Team All-Star. Lethbridge was named the MVP for his outstanding play throughout the tournament, and received the CCAA Exemplary Leadership Award.

Gundrum was named the player of the match as well as a CCAA Tournament First Team All-Star. “Being able to compete with my brothers day in and day out is something that I will never forget, but to finish the year as national Champion, that truly is priceless,” Gundrum said in an email. “The thing that I am most proud of is how our team plays the game. We don’t yell at the other teams, the refs, or any of the 1200+ Red Deer fans giving us a hard time. We looked at one another for support and guidance when things got tough and because of this, we played intense volleyball with a smile on our faces.

Being part of this team is truly a dream come true and to cap off my fifth year with a ring, makes it even sweeter.”

Johnston said that after achieving this major milestone, the team looks forward to enjoying some well-deserved rest. He also added that winning the gold is an addicting feeling, inspiring the team to go for another.
CCAA Fanshawe Falcons Volleyball