CREDIT: NAUMAN FAROOQ
For better or worse, the Jaguar XE features a few interior and exterior changes for the 2020 model year.

The Jaguar XE has been around since the 2016 model year, but it is not a common sight.

Competing in a class with rivals such as the BMW 3 series, the Audi A4, Mercedes-Benz C-class and the Lexus IS, the Jaguar XE has not won over the masses.

Jaguar can see what is happening, and have opted to make quite a few changes for the 2020 model year XE, which include some interior and exterior enhancements, but possibly a demotion in terms of powertrain.

From 2020, there will be no diesel option offered with the XE, and the limited-run Project 8 will also vanish. Sadly, the supercharged V6 option is also being dropped; only turbocharged inline-four cylinder motors in 247 horsepower and 296 horsepower guise will be offered.

So, to have a last go of an XE with a supercharged V6, I borrowed this 2018 example from Jaguar Canada. As I found out, we’ll be missing out on an incredible machine!

My tester, an XE 380 AWD S came equipped with a supercharged 3.0 litre V6, that produced 380 horsepower and 332 pounds per foot of torque. Power is fed to allwheels via an eight-speed ZF automatic gearbox, which is not only very smooth, but also very quick.

Power and speed is one thing, but it’s how a car feels at speed that is totally different! Some cars are fast, but feel nervous when being pushed.

No such issues with the XE. In fact, this car feels better as the speed builds. On the highway, the car feels planted, and the ride quality is excellent. It is fairly opposite in town speeds, because thanks to its stiff platform and performance- oriented suspension with adaptive dampers, even in the most comfortable setting the XE 380 AWD S felt too stiff on city streets at slow speeds. Be in no doubt, Jaguar has set up this vehicle to run, and run fast.

It can take corners at speed, too. Thanks to fully independent suspension with adjustable dampers, a wonderful steering set up, and a willing chassis, the XE 380 AWD S, even when equipped with eco-minded all-season tires (it should have been wearing winter tires) handled very well, expect on days when it snowed a lot – then it was a drift machine!

Despite the speed, its thirst was fairly reasonable. On my test cycle (170 kilometres of highway driving + 130 kilometres of city driving), I averaged 12.3 litres/100 kilometres. While that might not make it the most efficient car in its class, the fun I had driving this surely made up for the gas expenditure.

It’ll cost you quite a bit to bring one home, too. My very wellequipped tester was priced at $67,500 (including freight). That’s certainly not cheap, but trust me, most of its competitors – when similarly equipped – would cost even more, and while the Lexus IS350 F-Sport AWD is cheaper, it has no where near the power of the XE 380 AWD S.

Most others in this class also don’t have interiors as luxurious as the Jaguar’s either, although, I wish it had an infotainment system that is not a touch screen.

Any other issues? Yes, I also wish it looked more special than it does. Jaguar surely played it safe and conservative with the XE, they could have been a lot bolder, like the Alfa Romeo Giulia.

As a whole, I really liked this particular XE, and could easily see myself living with one on a daily basis. It’s sad that the V6 powered XE is going away, but let’s hope, that in the future, a powerful, fully- electric XE will be introduced, and return some neck-snapping performance back to this nameplate.

PHOTOS COURTESY OF NAUMAN FAROOQ Click on the thumbnails below to view a larger version of each image. 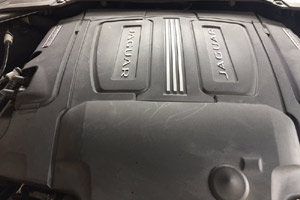