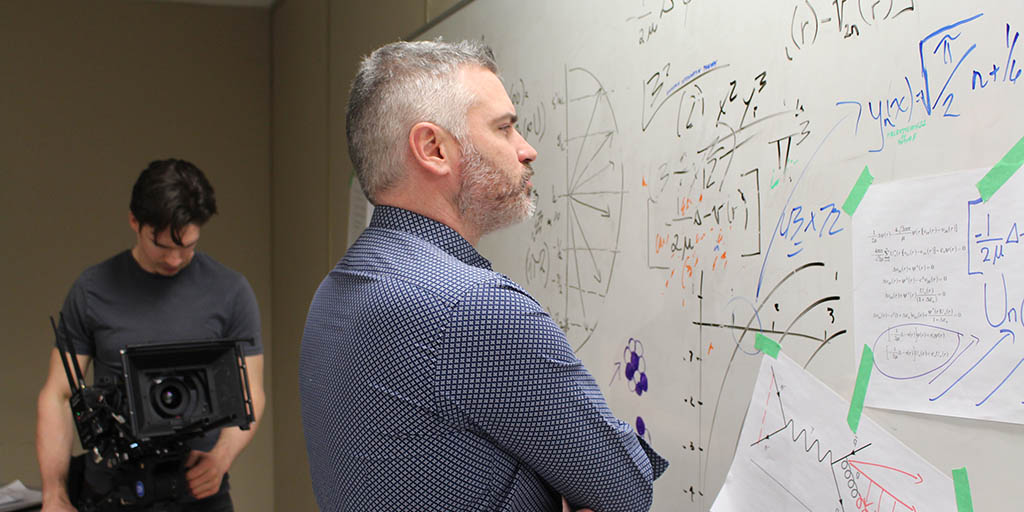 Chameleon, written and directed by Howald, tells the story of a mysterious man suffering from delusions of grandeur. His identity transitions back and forth between iconic mathematician John Nash and Italian painter Amedeo Modigliani.

Unlike other serial impersonators, the man’s take on Nash and Modigliani are extraordinarily accurate, as he is able to recite the mathematician’s complex theories while replicating Modigliani’s paintings with disturbing exactness.

The film explores whether the man is a fraud, or if there is perhaps more to him than what meets the eye.

The concept for the film came to Howald from an unexpected place.

“It hit me when I was sleeping,” Howald said with a laugh. “And then I wrote a short story on it called Amedeo because most of it is about Modigliani in the story. So much so, that once his signature and thumbprint is established with regards to his painting, his psychologist wonders if this theory on that he was writing [while] thinking he was John Nash on outer space dimension integration is real.”

She said that the science fiction story will allow audiences to make up their own minds with an open-ended conclusion.

Part of Chameleon was shot at Fanshawe College. Classrooms were used to film several scenes that included the mysterious man, played by Christopher Golovchenko, his psychologist played by Sarah Murphy-Dyson, and her ex-husband played by Doug Leoni.

For one scene, Golovchenko had to recite three and a half pages of technical dialogue to pull off a convincing likeness to one of the world’s most famous mathematicians.

“This is my fourth production with Meg, and each one keeps getting more and more professional and easier to do, but this script in particular is the hardest dialogue that she’s ever written for me,” Golovchenko said while shooting at Fanshawe. “I was a little intimidated going in, but now that we’re getting through it and my hardest scene is done, it’s been a very good experience and I have a very good feeling at how the rest is going to go.”

This is Howald’s seventh independently- made film. In 2017 she screened her debut feature, The Gold Fish Bowl, at the Toronto International Film Festival (TIFF).

After accumulating experience as an indie filmmaker, Chameleon is a technical landmark for Howald; her cinematographer, Daniel Everitt- Lock, used an industry-standard camera, and the cast are members of the Alliance of Canadian Cinema, Television and Radio Artists (ACTRA) union.

“I’m really thrilled because we stepped up the game with the production and a wonderful team” she said. “All my other films were shot with equipment from Media Services and very amateur crews. We still worked hard, [but] I thought I can’t keep writing scripts of this calibre and not getting them produced professionally.”

Once production has wrapped, Howald plans to privately screen the film, alongside her other completed works, at Hyland Cinemas in London, as well as the Fox Theatre in Toronto. She then intends to submit Chameleon to the film festival circuit. For more information on Howald and her craft, visit meghowaldfilm.com.