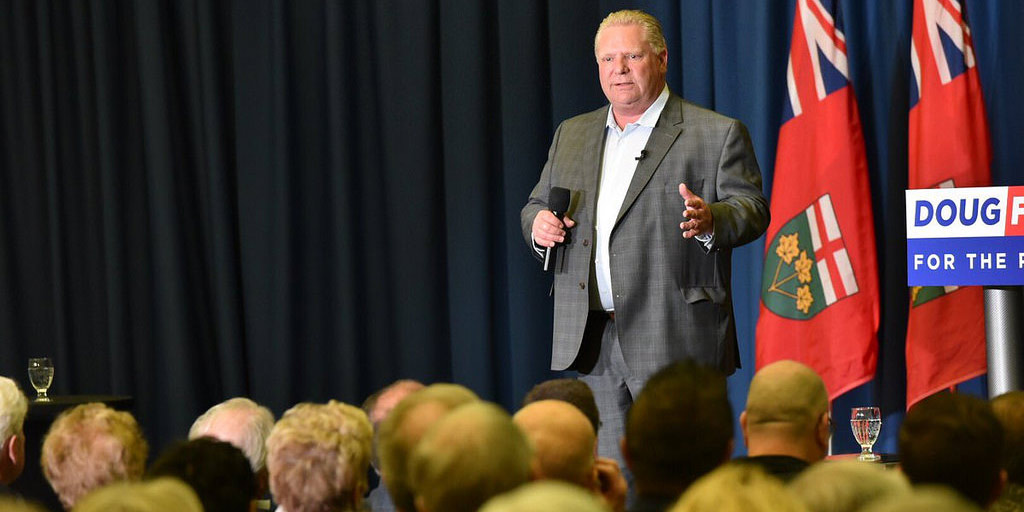 CREDIT: FLICKR - DOUG FORD SPEAKS TO A CROWD OF SUPPORTERS IN SUDBURY (MAY 3, 2018)
Student groups and opposition parties are saying a recent email blast confirms that the Student Choice Initiative is part of a political agenda to dismantle student unions.

Premier Doug Ford accused student unions of Marxism while asking for donations in a fundraising email sent out on Monday.

The letter, titled “How broken was education?”, outlined the Progressive Conservative (PC) government’s decision to make some student fees optional instead of mandatory in Ontario colleges and universities.

“Students were forced into unions and forced to pay for those unions,” Ford stated in the email. “I think we all know what kind of crazy Marxist nonsense student unions get up to.”

The Fanshawe Student Union (FSU) has responded to the message with criticism.

FSU president, Jahmoyia Smith, called the comment “off base” in a statement released this morning.

The FSU statement went on to say that student unions draft their policies off evidence, rather than ideology, and that its direction is based on student consultation.

The FSU is among numerous student groups and opposition parties who say that the email confirms the government’s agenda to dismantle student unions across the province.

“Doug Ford is attacking student unions because he doesn’t want students to be able to organize to fight against not only this round of cuts, but the next round as well,” Chris Glover, critic of colleges and universities for the New Democratic Party (NDP) of Ontario, said in a statement on Monday. “He is downloading billions of dollars of debt onto students who already face the highest tuition and student debt levels in the country.”

Nour Alideeb, Ontario chair of the Canadian Federation of Students, said in a comment to the Globe and Mail on Monday that the PCs are using the Student Choice Initiative to hurt political opponents rather than help student interests.

“The Student Choice Initiative isn’t about saving students money. It’s about breaking down the organizations that advocate for students’ interests,” Alideeb said.

On Jan. 17, the Ford government announced a ten per cent decrease in tuition. It simultaneously introduced its Student Choice Initiative, which eliminates mandatory fees paying for student services, excluding those related to health, wellness, safety and career counselling. The Ministry of Training, Colleges and Universities said that these fees can cost students up to $2000 per academic year.

Other changes include the end of free tuition for students from low-income families, and of the six-month grace period for the Ontario Student Assistance Program (OSAP).

The FSU is among over 75 student unions to have signed a letter urging the Ford government for more consultation on how the Student Choice Initiative will impact student services such as activities, clubs and newspapers.

“Our mandate is to serve and advocate for students,” Smith said in this morning’s statement. “We will continue to work with all key stakeholders including the government, and to respectfully voice our opposition when we feel that policies do not benefit students.”

“I ask that the government affirm we are a critical part of the post-secondary environment and ask Premier Ford to apologize and recant what was communicated in the PC party fundraising email. I also call on the PC government to meet with student leaders, listen to our concerns, and reverse the Students’ Choice Initiative.”

Frostbiking: The joys of winter riding