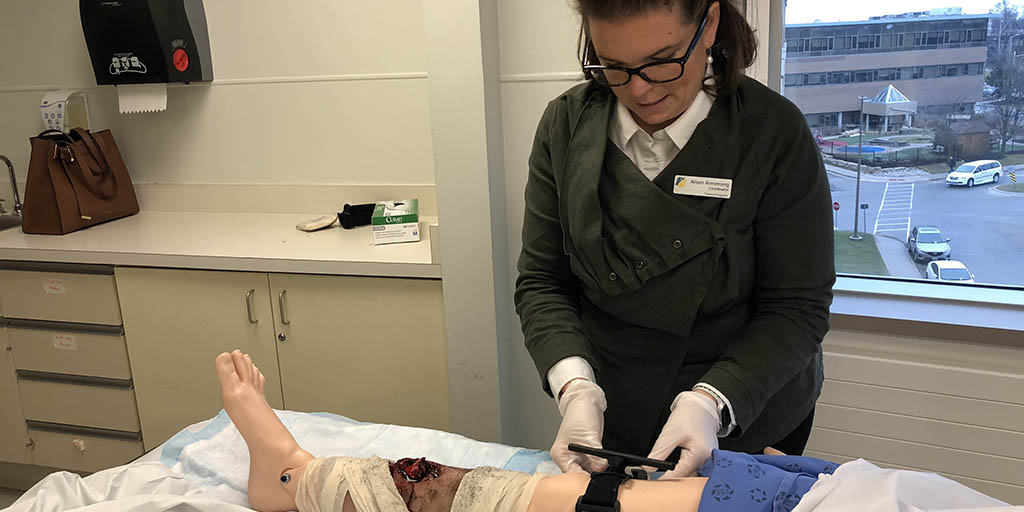 London Health Sciences Centre is now offering “Stop the Bleed”, a comprehensive program teaching civilians the basic “Bleeding Control” principles to aid those who are involved in mass casualty situations or other trauma resulting in high levels of bleeding.

The program, which was created by the American College of Surgeons Committee on Trauma, hopes to increase survival rates between the time an incident occurs to when medical help arrives by teaching participants how to stop the bleeding. The program teaches two techniques to help stop the bleeding: the use of a tourniquet and wound-packing.

The “Stop the Bleed” course has been taught in the United States since 2015, but is now being introduced as a monthly program at LHSC.

Alison Armstrong, the trauma program co-ordinator at LHSC, said she is excited to introduce the program to the community.

The program was created in response to the Sandy Hook Massacre which occurred in 2012, as well as multiple other tragedies which involved mass causalities. After the massacre, in collaboration with leaders from law enforcement, the federal government, and the medical community, the Joint Committee to Create a National Policy to Enhance Survivability from Intentional Mass Casualty and Active Shooter Events was created to improve the survivor rate in the midst of a mass casualty.

After meeting twice in 2013, the deliberations that the committee came to are now known as the Hartford Consensus, a collection of documents that detail strategies to enhance survivability in active shooter and intentional mass casualty events.

While this program was introduced to the United States as a response to the number of intentional mass casualties and active shooter situations in the country, Armstrong said she believes that it is important to have resources like this in Canada too.

“This program is not only for active shooter situations, but can be useful in farmer emergencies, workplace emergencies, and motor vehicle crashes. It’s still applicable,” Armstrong said.

Armstrong said that the most preventable death in trauma is blood loss, but that often bystanders do not have the required knowledge to help a victim.

“If there is someone at the scene of the crash who has the knowledge to stop the bleeding, then we could increase the survivability,” Armstrong said.

The average “Stop the Bleed” program is an hour and a half long and includes traditional lecture- style teaching, and practice breakout sessions where participants can practice bleeding control techniques with simulated limbs and mannequins. The program is free and offered at LHSC or can be booked for on-site visits.

Armstrong said she hopes participants come out of the program with the knowledge required to stop a bleed, but also with a feeling of empowerment.

“I hope [participants] feel empowered to react to an emergency if they were to see one and help out,” Armstrong said. “I think in general we all want to help when there’s an emergency, so hopefully this gives some people the knowledge to.”

“If we are able to save one person, the course will be worth it.”

The next Stop the Bleeding training session will take place on March 7 at 6 p.m. at LHSC. Those who wish to find out more or enrol in a session can call 519-667-6795 or email trauma@nulllhsc.on.ca.
Blood London Health Sciences Centre Medical

Aaron Pritchett: Back in London and ready for a good time