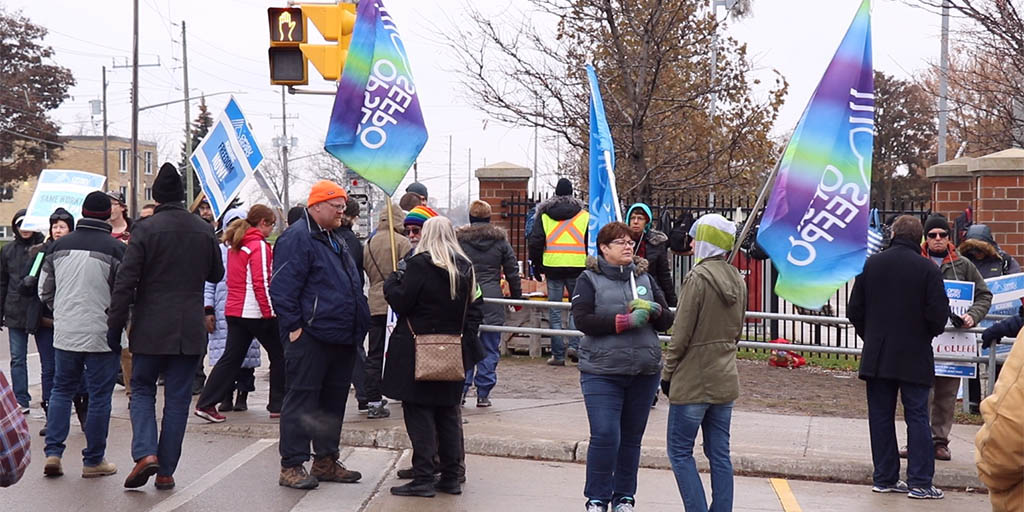 CREDIT: JORDAN CROW
The Ontario Public Service Employees Union (OPSEU) have been advocating for part-time staff since the five-week province-wide college strike in 2017.

The agreement came after nine months of collective bargaining, and over a year after the Ontario Labour Relations Board confirmed OPESU’s right to represent 20,000 part-time workers.

“This is an historic first contract,” Janice Hagan, chair of OPSEU’s full-time college support division, said in an email. “The part-time college support bargaining team is very excited to get job security, job competition language, a decent raise, and not having to apply for your job each semester. We have a way to go before parttime employees have parity in wages and benefits with their full-time colleagues, but this is a giant step forward.”

Specific details of the agreement will be released after OPSEU members have had a chance to ratify it. A Jan. 30 press release from OPSEU said that the bargaining team is recommending acceptance of the deal.

“I predict this deal will have a ripple effect that will eventually benefit all precarious workers in Ontario. It raises the bar for how those in precarious work are treated. The pressure will now be on all employers to step up and to treat workers fairly,” Almeida said.

“While I commend the employer on arriving at a negotiated settlement, I say in the strongest terms that it’s time to drop your legal challenges to the part-time academic organizing drive currently before the labour board,” Thomas said. “It’s 2019. All college front line workers should have a collective voice in the workplace. Stop spending precious tax and tuition dollars fighting the inevitable.”

An Ontario college faculty strike in fall 2017 pointed towards increasing frustrations of part-time support staff. Contract faculty said they were paid less than full-time staff and had no health or pension benefits. They were unable to rely on their jobs for security, as they had to reapply every semester.

The striking teachers asked for longer contracts for contract workers, an equal ratio of part-time to full-time workers, and more job stability.

The five-week strike ended after the then Liberal provincial government passed a back-to-work legislation.

In a statement released on Jan. 30, Pascal Bessette, chair of the CEC’s college bargaining team, said that the two-year agreement will benefit everyone involved.

“This first collective agreement for part-time support staff in the 24 Ontario colleges is an important step in employee relations for our post-secondary education sector. We have an agreement that meets the needs of Ontario’s colleges, employees, students and the communities they serve,” Bessette said.

The part-time college support bargaining team will tour Ontario campuses to share information about the tentative agreement and ratification vote.

The ratification vote will be held on Feb. 21. OPSEU local 109 will be assisting, and sending out information as soon as they have planned their routes.
College Employer Council Fanshawe employees OPSEU