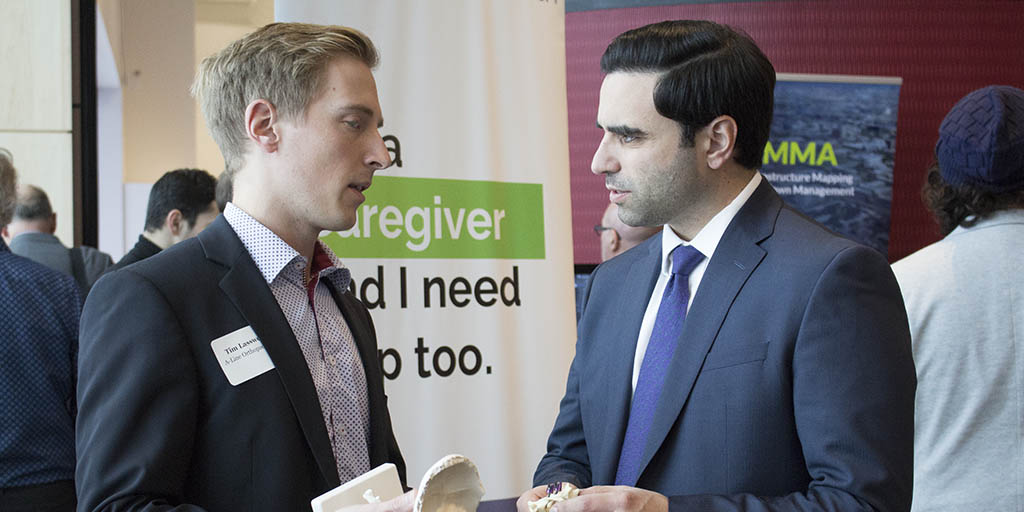 London North Centre MP Peter Fragiskatos (right), listens to a pitch from Tim Lasswell (left), of A-Line Orthopaedics. The med-tech start-up was one of the life sciences companies showcased by TechAlliance at Museum London on Nov. 15, as part of their BURST program.

London North Centre MP Peter Fragiskatos attended a showcase at Museum London on Nov. 15, hosted by TechAlliance of Southwestern Ontario, to announce that FedDev Ontario is providing funding for the continuation of TechAlliance’s BURST program.

“For most of our history in London, we have based our economic growth on a very traditional approach to manufacturing. We are pivoting away from that and we must because society is evolving. As technology evolves, so too does the economy,” Fragiskatos said in his speech. “We also need to diversify. This is where life sciences comes in. This is where medical devices come in.”

TechAlliance is a regional innovation centre in London and area that helps tech-based businesses grow. In 2017, it assembled its first cohort of 10 companies for its BURST program.

According to a Nov. 15 FedDev Ontario news release, the BURST program focuses specifically on supporting start-ups and scale-ups based in London’s life sciences sector to commercialize new technologies and become investor ready. TechAlliance provides participating companies with funding and resources for professional development.

So far, the BURST program has helped 30 companies over the span of three cohorts, created 54 jobs, and seen the commercialization of nine new life sciences products.

Western graduate Daniel Gelman was part of TechAlliance’s showcase, which featured some of its BURST companies. Gelman is the co-founder of Aufero Medical Technologies, which has developed a device to treat cardiac arrhythmia.

“Before BURST I was just a student with a fairly good idea of prototypes and data and some traction, but I had no medium to really facilitate to the next step. BURST had everything. They give you the initial capital funding you need to actually make a market presence, but also give you a mentor, give you space, give you other resources that have been invaluable[…], everything that an early-based medical device company would need to know,” Gelman said.

This is the second time the program has received funding from FedDev Ontario, a federal institution that is part of the government’s Innovation, Science and Economic Development portfolio. It has previously given BURST $1.32 million.

“In the broader scope, the more we can create a life science economy in London and boost that, it’s going to create long term opportunities,” Picken said. “When we talk about life science it can be anything from frontline healthcare workers, researchers, marketing and PR. There’s going to be tons of opportunities.”

When speaking to Interrobang, Fragiskatos agreed, saying that the government’s support of BURST will ultimately help London’s post-secondary students in the long run.

“Young people have ideas and they are ready to go out into the economy and thrive. But if they’re looking to start a business, quite often they will need that mentoring support, that seed money support, and various other supports that are necessary for them to take an idea and turn it into a reality in a business sense. And that’s what Burst is all about,” said Fragiskatos.

“For me, what’s exciting especially is that we’re focusing on the life-sciences centre. This is ultimately a story about people. When you invest in life sciences, when you generate the sort of support that entrepreneurs in that sector need, ultimately everyday people will benefit.”