What's in store for your future 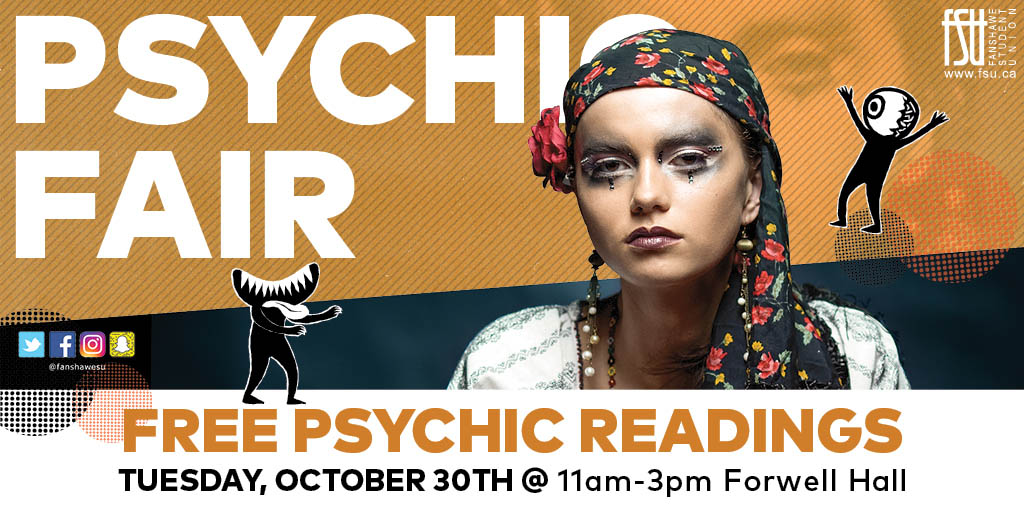 The FSU Psychic Fair will be held on Tuesday Oct. 30 this year.

Fanshawe Student Union (FSU) will be hosting its bi-annual Psychic Fair at the college this coming Oct. 30, a day before All Hallow’s Eve.

The day long event, running from 11 a.m. to 3 p.m., promises to be full of psychics reading the future of many students at the school.

Kevin Masterson, events and activities manager of the FSU, said due to the event’s popularity, it has grown from how it was in the beginning.

“We tried it for the first time a few years back and found that it was very popular with the students. A lot of people came out to it. And it’s something that we can run that is a four hour long event and a lot of people can come. They [students] like it, there are lineups and it’s an easy event that people enjoy,” Masterson said.

Dan Valkos, a Canadian psychic since 1969, ranking among psychics second in the nation and 52 nationally, has been coming to Fanshawe for more than 20 years to bring students their readings.

A psychic who reads people by looking at them and tuning into the vibrations coming off of them. Valkos said those who come visit him at the fair ask him three questions that he answers with brutal honesty, for their benefit of course.

“I’ll never lie to a client. I’ll never tell them something they want to hear, but I always look at doing things in a positive manner and giving some positive insight and advice,” Valkos said.

According to Masterson, the event will take place Forwell Hall, in SUB. Previously with just five psychics, this year there will an addition of one more psychic to the roster. Students will be able to line up for their readings to be taken by the various techniques each psychic has such as Valkos’ three questions or tarot cards and palm readings.

Masterson explained that students would have the opportunity to have several readings done if they wanted since the event runs through most of the afternoon.

When asked why the psychic fair seems so popular among students, Masterson had positives to share.

“It’s fun right? Whether you believe or not about somebody telling you the future or what your career is going to be like, I think that people like that kind of stuff. It’s harmless fun.”
Fanshawe Student Union On Campus Events Psychic

1
LEAP Demo Day returns after nearly three-year hiatus
2
Class Representatives: There for you
3
Transitioning from high school to post-secondary education
4
Fanshawe fashion show promotes sustainability
5
The complete guide to starting or joining a club at Fanshawe