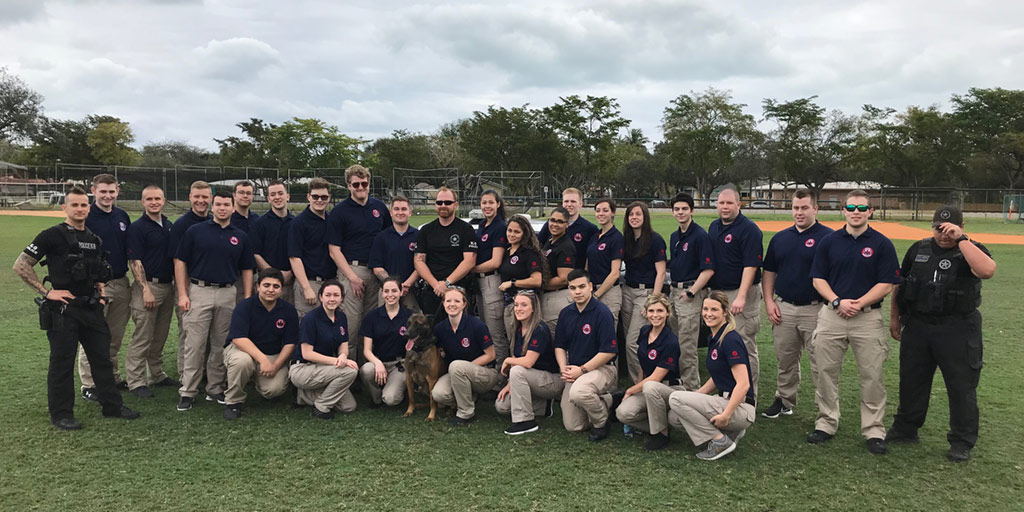 CREDIT: JON KUNDER
Fanshawe police foundations program students along with a few other selected students went on an educational trip to Miami to learn more about working in their industry of choice.

Students in Fanshawe’s police foundations program had a real life training trip while in Florida for a Miami law enforcement experience.

The trip was seven days and six nights, from Jan. 24 to 30, cost ranging from $1,100 to $1,200; covering their flight, accommodations, transportation, and a couple meals according to Jon Kunder, program co-ordinator and instructor in the police foundations program at the School of Public Safety.

Though many students look forward to the trip, not everyone in the program will go, and there is a rigorous selection process to determine who the chosen few will be.

“This year we hosted 68 interviews for 28 spots. You can’t have failed any courses previously. We look for three things: […] academics, […] community involvement, […] and are they going to be a good fit for our team. We took 28 people from four different sections of the police foundations program and some from the protection, security and investigation (PSI) program, […] some of them didn’t know the [others] but now they’re spending seven days together,” Kunder said. He added, “I’m always impressed how [students] represent themselves.”

Adam Seguin a student in the police foundations program who was involved in the peer liaison program was selected as an alternate.

“If someone dropped out of the trip [I would get to go], and they did. I felt so lucky, I was ecstatic,” Seguin said.

Seguin gave some advice to anyone considering going on the trip next year.

“I’ll tell this to any first year [who wants to go on the trip]; show up to every class,” Seguin said. Seguin described the first day with Florida fish and wildlife.

“[It] was interesting to see how they deal with different animals. We got ten students to hold a [very large] snake; everybody picked it up. The snake was pure muscle and felt like gelatin. It blew me away when I saw it,” Seguin said.

The next day was spent with Crime Scene Investigation (CSI) in the morning, followed by a K-9 demonstration.

Students witnessed a police dog performing drug searches. Students could also volunteer to get bitten by the dog.

“I got to wear a vest and a sleeve, [and] there was a metal bar so I didn’t feel the dogs bite,” Seguin said.

The following day they spent the morning with the medical examiner’s office. Their roles and responsibilities were explained to students as they went into an autopsy.

Dean Alford, another Fanshawe police foundations student who went to Miami, described his experience at the autopsy portion of the trip.

“We got to witness two autopsies. What sickened me most is that they took all the organs out, wrapped it up in a hazard bag, and sewed [the person] back up. We got to see the brain being opened up. When they were cutting through bone there were skull fragments flying around everywhere,” Alford said.

That afternoon was spent on three boats on a marine patrol on the intercostal water ways.

Students also went on two ridealongs, which is where they would sit in the patrol car with police officers throughout their shift.

“Typically most of [the students] enjoy the ride-alongs,” Kunder said.

“Honestly that was the most fun I’ve ever had,” Seguin said.

He went on to explain the value of the hands on experience. “I was terrified when I had to get out of the car. That was the first time I was truly nervous on the trip. After that it was really a breath of fresh air because I thought, ‘Wow that was not as scary as I thought it would be,’” Seguin said.

“We had a drive course. They demonstrated certain tactics they use. We got to sit in the car while it was going through the demonstration. We were spinning non-stop; traveling at about 35 miles per hour in a spinning-skid forward,” Alford said.

“This year students actually got to shoot on the gun range under the supervision of three tactical guys. That doesn’t always happen and hasn’t happened in about five years,” Kunder said.

Their final days were spent team building on the beach before closing out with a hospitality event and coming home.