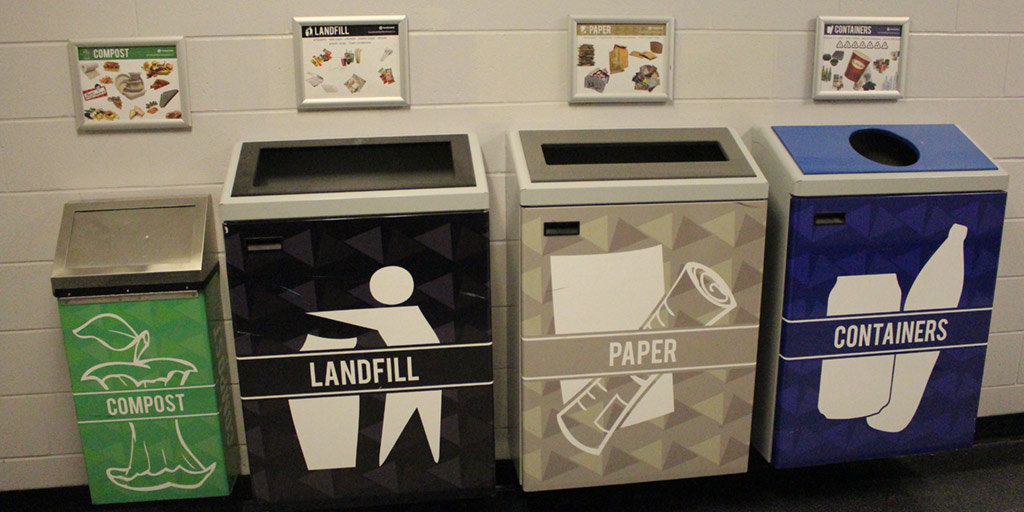 CREDIT: MELISSA NOVACASKA
Waste bins in the 'D Building' will be removed from classrooms for a month as part of a pilot project to increase the College's diversion rate. Fanshawe's total waste diversion rate in 2016 was 41.1 per cent.

Fanshawe's Facilities Operations and Sustainability Department will be conducting a pilot project in the ‘D Building' throughout the upcoming weeks in an attempt to improve the College's diversion rate. A diversion rate is determined by the amount of waste that is disposed of by alternative strategies that would otherwise end up in landfills. These other means typically involve recycling, composting, and other eco-friendly activities. The pilot project will remove waste bins from classrooms, which will theoretically help individuals recycle their items in hallway bins, rather than throwing all items (including recyclable items) in the landfill bin.

According to Amanda Whittingham, the sustainability co-ordinator at the Department of Facilities Operations and Sustainability, data from last year's waste audit report showed that classrooms at Fanshawe's London campus have poor waste diversion. Whittingham explained that the department has several reasons they think the diversion rates in classrooms are so low. She states that the bins do not have physical barriers to deter individuals from using landfill waste containers and that the signs indicating where certain items should be placed are not easily visible.

“There are a couple of colleges and universities in both Canada and the U.S. that have done this [pilot project] and have had a lot of success. I want to see if it would work at Fanshawe,” Whittingham said.

Throughout the time the waste bins are removed from classrooms, there will be maps to help direct individuals to the nearest set of bins. Fanshawe College's total waste diversion rate in 2016 was 41.1 per cent, which was 5.6 per cent higher than the 2015 diversion rate.

Whittingham explained that it is also important that individuals dispose of items in proper bins. “When it comes to recycling, we can only have five per cent contamination. Only five per cent of what is in a bag cannot belong there. If there is more than five per cent of the wrong item in a bag, the whole bag gets thrown out, which then makes it so nothing gets recycled.”

It is also important for the London community as a whole to maintain a high diversion rate as Whittingham explained that there is only nine years left for the London landfill if diversion rates are low throughout the next decade. “If we do not reduce the amount of waste we are sending there, in nine years they are going to have to buy up another piece of farmland and build another landfill, which is not what we want.”

In regards to compost items, when the material breaks downs in a landfill it produces methane, a potent greenhouse gas that is about 18 times stronger than carbon dioxide. However, when compost is disposed of properly, it is sent to a facility that is capable of safely breaking down the items and converting the methane into biofuel that can be used to generate electricity. “

Sustainability is about small steps to making big change. Even though someone might feel that recycling properly does not make a difference, [those who do recycle will create] a ripple effect that will impact others around them to do the same. We all want to make sure we are all taking those small steps. Each small step will absolutely add up to a big change,” Whittingham said.

To learn more about the pilot project and the benefits affiliated with disposing of items properly, individuals can email sustainability@fanshawec.ca.