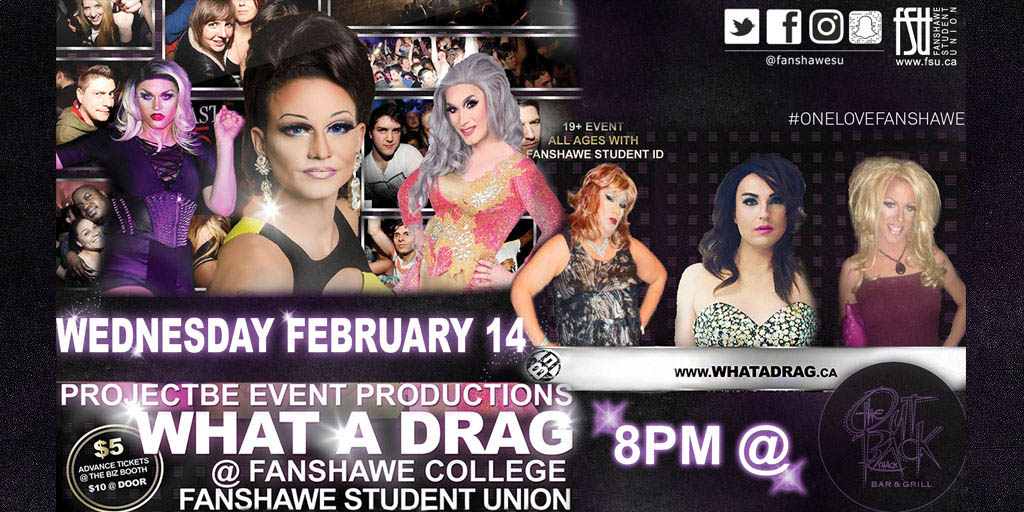 CREDIT: PROJECTBE EVENT PRODUCTIONS
With the success of its last two shows, What a Drag is back at Fanshawe for the third time on Feb. 14.

People say “third time's a charm” and the Fanshawe Student Union (FSU) drag show can prove just that, coming back to campus for its third year.

ProjectBE Event Productions, a LGBTQ+ community based in southwestern Ontario, in collaboration with the FSU is bringing back its popular event, What a Drag, to Fanshawe College once more on Feb.14.

What a Drag is held monthly allaround London and other cities in southwestern Ontario, featuring local drag performers, comedians and a variety of different entertaining acts.

Kevin Masterson, events and activities manager of the FSU, who has helped co-ordinate the last two shows, including this upcoming one, said that the popularity of the event wouldn't let it die.

“We wouldn't want it to stop anyways because it is very popular,” Masterson said.

The show has had much success in the past, with over 100 students making it out to the performance each time.

According to Masterson, he expects just as many students this year as before.

“One hundred and forty students attended the first show and we had 180 students come out last year. That is the Out Back Shack's max capacity. I won't be surprised to see it full again this time,” Masterson said.

Like last year, with the show being held in the Out Back Shack, the restaurant will be outfitted with a runway once more to allow the performers to strut their stuff down the length of the restaurant.

Masterson explained that having the seats set up like this enhances the performance and makes it easier for the people attending the show to see it clearly. The seats by the runway, he said, are the best seats.

Masterson also recommended to “Get [to the Out Back Shack] early if you want a good seat”.

What a Drag, will be featuring local drag queens, some different from the lineup last year.

Masterson said the show will be virtually the same as last year's and he sees it being just as successful.

What a Drag will be held on Feb.14 at the Out Back Shack starting at 8 p.m. Advanced tickets will be available for $5 at the Biz Booth, or $10 at the door on the night of the event. All ages with a valid Fanshawe student card may attend and 19+ without.