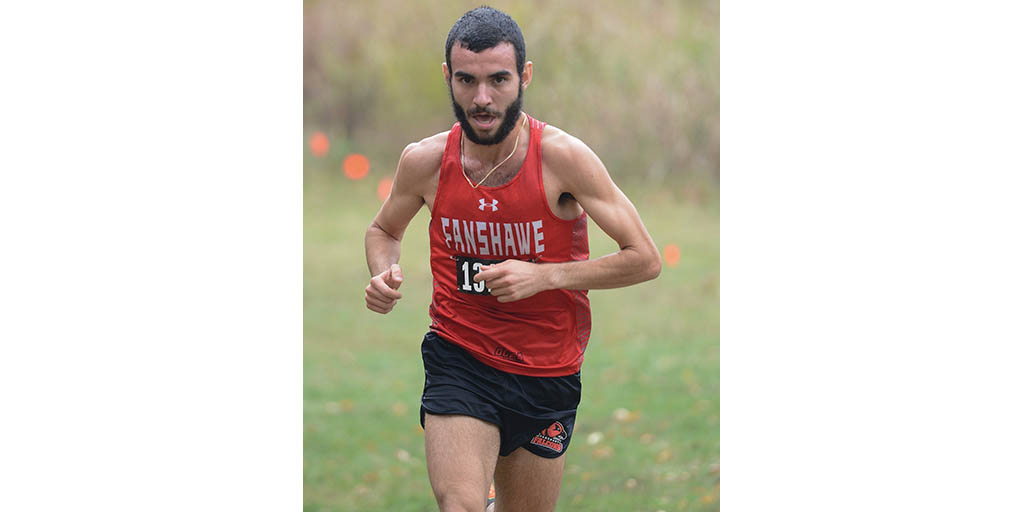 CREDIT: COURTESY OF FANSHAWE ATHLETICS
Fanshawe alumnus, cross country athlete and 2016-2017 Ontario Colleges Athletic Association (OCAA) Male Athlete of the Year Seth Marcaccio, has already set the bar high, and will continue to do so as he attempts to run marathons and some day, the Olympics.

Seth Marcaccio is setting the bar high when it comes to life after post-secondary education.

The newly minted Fanshawe alumnus has been named the Ontario Colleges Athletic Association (OCAA) 2016-2017 Male Athlete of the Year, becoming the first in Fanshawe College’s history to do so and the first ever-male cross country runner in OCAA history to be awarded with this title, according to a Fanshawe Athletic press release.

“It was definitely the culmination of a lot of hard work this past season,” an honoured Marcaccio said.

Although Marcaccio possessed the uncanny ability to sustain from any major injury during his college career, it was through exemplifying the four pillars of Fanshawe Athletics – commitment, determination, accountability and passion that he was able to achieve both great success and the unconditional support of many including Nathan McFadden, manager of Fanshawe athletics.

“He’s someone that is extremely driven and focused, a model student, a model athlete and a model person,” McFadden said. “Like a thoroughbred race horse, we have to tell him to reign it in, he runs almost too much.”

With a sizeable collection of medals and astonishing accomplishments such as winning the Canadian Collegiate Athletic Association (CCAA) National Championships 20 seconds faster than the second-place finisher, the road ahead looks bright for Marcaccio.

According to the distinguished cross country runner, the near future could see his participation in events such as the Scotiabank Toronto Waterfront Marathon, Philadelphia and Boston marathons and the Olympics.

“Definitely, you’d like to reach the pinnacle of your sport,” Marcaccio replied when asked about the prestigious event(s).

“I want to work on my speed a little bit and maybe run 29 minutes for a 10 kilometre [run] if things go well,” Marcaccio said.

McFadden further voiced his total faith and support in Marcaccio.

“There’s no doubt in my mind with his focus and determination, he will reach his goal and be in the Olympics one day and running marathons. I would certainly bet my house that this will happen knowing that individual. There’s no question that he will achieve that goal, it’s just when that’s going to happen,” McFadden said. “He’s that determined, he’ll achieve it for sure.”

As Seth leaves behind his days at Fanshawe, like a true model athlete he offers nothing, but support and parting words for his running family.

“Good luck to the team next year because despite some convincing, I’m not going to be back. Although I’m going to try to come and help out when I can, hopefully I’ll be able to see as much of the team as I can,” Marcaccio said.