Fanshawe and FSU gear up for Pride London Festival 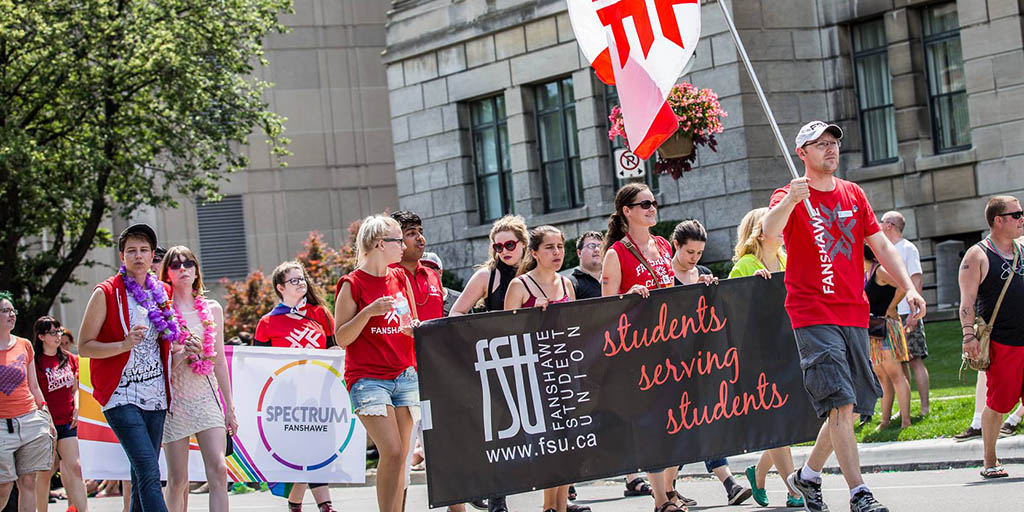 Fanshawe and the Fanshawe Student Union (FSU) are getting ready for this summer’s Pride London Festival.

Kaisar has been walking in the Pride London Parade for three years; his first year walking was with the Spectrum club, Fanshawe’s LGBTQ+ group.

Current secretary of Spectrum, Brook Iden had some words to say about Fanshawe’s LGBTQ+ club.

“[It’s] a type of gay-straight alliance that anybody can join, we’re all about getting support out there to those who need it,” Iden said. “The club is called Spectrum because there are so many different [gender] variations. Our goal is to get students involved and make sure people in the community know that there is a safe place they can go within the school,” Iden said.

Iden had some positive views on what Fanshawe is doing to support the LGBTQ+ community in and around Fanshawe.

“Fanshawe being a platinum sponsor of Pride London and having gender-neutral/accessible washrooms is great. Fanshawe supports the LGBTQ+ community; we’re making great progress, things are moving in the right direction,” Iden said. “I love it when allies come out, that’s how you know there’s support from the majority,” Iden said.

“We’re excited to have a presence in the parade. On campus in front of F building the morning of July 20th Fanshawe president Peter Devlin will be raising the Pride flag alongside the Fanshawe flag,” Gamble said. “Anybody is more than welcome to attend the flag raising and join in on the parade and represent Fanshawe,” Gamble said.

She also encourages those going to march in the parade to wear their Fanshawe red.

“It’s important as a college to support our students and staff, and also to show the community that we’re supportive of those [in the LGBTQ+] communities,” Gamble said.

According to Gamble, though Fanshawe has supported Pride London in the past, the college increased their sponsorship to insure they have a “strong presence”, at the event.

Gamble described how the steps leading up to a full platinum sponsorship were incremental.

“We increased our involvement every year and now have an organizing committee,” Gamble said.

Former Spectrum club member and former FSU president Carlie Forsythe, who is currently a member of Fanshawe’s Board of Governors, and is known as a “perpetual student” is currently working with Fanshawe facilities to get rainbow crosswalks around campus.

“The message is inclusivity, bringing everyone together, breaking down barriers, and education,” Forsythe said.

Forsythe showed her competitive side saying, “Personally I want to outshine Western [University], the more Fanshawe red we can get out there the happier I’ll be.” Pride London festival is 11 days from July 20th-30th.

“The Victoria Park stage will be called the Fanshawe Entertainment stage, there’ll be drag and musical performances. The 30th is the actual march [where] we’ll walk from Western Fair [District] to Victoria Park,” Kaisar said.

With staff and students enthusiastic about getting involved, Fanshawe has come out in a very public way as a platinum sponsor, pledging roughly $10,000 according to the Pride London webpage.

Kaisar described some memorable moments of past parades, how people saw Fanshawe as their catalyst to enter the march.

“Fanshawe was always there [at the festival], but we were never together. There were Fanshawe groups such as Spectrum and Positive Space [Ally program], and Fanshawe Residence Services (Sodexo). This year we’re all going to walk together,” Forsythe said.

According to Kaisar, Pride started out historically as protests, and though Pride has evolved a lot, it’s still good to remember how it all started.

Focusing and feeling at ease with the help of fidget spinners